Umbrella Politics: Arguments for Complex Social Organization in the Rain

We've been having a rainy bout here in New York, and with the rain comes the 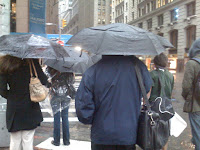 requisite rain boots and umbrellas. Navigating crowded city streets during peak times with umbrellas is no mean feat. Umbrellas become an extension of human anatomy as they bob along with their users; some are taller than others (due to the height of the user), some more colorful than others, and some are larger than others, but all require the user to dart and weave and shift to accommodate other umbrella owners—it’s almost poetic. But there’s something more to it: the coordinated efforts of umbrella users can help us discuss the complexities of social organization.

It’s not quite clear when tool use was introduced in our evolutionary history. The oldest identified tools come to us from the Oldowan Gorge in Tanzania. These seemingly simple stone tools are known as (can you guess?) the Oldowan Tool Industry and they appeared approximately 2.6 mya. Of course, one supposes that these were not the first tools, but rather the first implements archaeologists have found that could be readily identified as such—particularly since chimps, orangutans, gorillas, and some other non-human primates have shown that they can use tools for their benefit (see video below). Olduwan tools were likely produced by both Australopithecus and Homo, but they are most frequently linked to Homo habilis—a species that we know little about, but lived during the Olduwan period. Future findings may likely attribute the Olduwan industry to earlier ancestors as there is already evidence that Australopithecus garhi may have had a hand (no pun intended) in making these implements.

So what do these tools have to do with umbrellas? Well, umbrellas are tools, aren’t they? They are highly visible—but simple—tools. They’re portable coverings that protect us from the elements. They don’t do anything fancy, such as allowing us to calculate restaurant tips or find directions or update our Facebook statuses on-the-go, they don’t allow us to record our thoughts on paper, or carry liquids over distances for later consumption—they provide the simple convenience of staying dry. The development of tools in our evolutionary history necessitates cognitive and social development. Think about it: you’re wandering the grasslands with a chopper and you’ve gotten pretty handy with it at cracking nuts. You’ve probably shown your offspring how to make and use a chopper, just as you might have learned how to make and use these tools from your parental groups. The success and survival of the group you wander with has depended heavily on this shared knowledge. Now umbrella use doesn’t protect us from predators (unless you’re using it to fend off your fellow pedestrians), or allow us to feed ourselves (although it can get you to your local Whole Foods nice and dry), but in observing the social maneuvers they require, we can see traces of our social order.

Anyone who’s been caught out in the rain without an umbrella knows the benefit of having a friend who does have one. Umbrellas 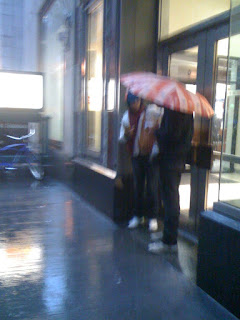 facilitate relationships and cooperation. In sharing cover from the rain with you, your friend has weighed the benefits of sharing—and consequently your relationship. I’m not saying that your friend stands there and makes a list of all the reasons why he should give your cover, but there is something about the nature of your relationship that encourages sharing. He offers you shelter because your relationship encourages him to do so. You might be less likely—and possibly find it rather uncomfortable—to share such a close space with someone you didn’t know very well. Now if you don’t have a friend with an umbrella, and you unfortunately are caught out in the rain, you need to strategize the quickest method of reaching dry areas—in the photo shown, the target area is a subway entrance. This requires utilizing cognitive skills to plot the fastest method of reaching your target area, which may mean using alternative routes (e.g., cutting across the street, walking under eaves), or creating make-shift covers (e.g., holding your jacket over your head).

Physical movement is also influenced by umbrellas. In bottle-neck situations, such as at the entrance to a subway or building, individuals with open umbrellas meet and pass individuals with closed umbrellas. These are sites of change: umbrellas are closed and opened as their users enter new environments. Because umbrellas are rather large, the coordination must be precise. and despite this attempted exactness, it can be complicated. Here are a few strategies: 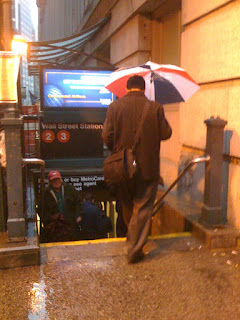 1a. Individuals exiting the subway duck under fellow pedestrians with open umbrellas—opening their own umbrellas only after they have fully cleared umbrellas entering the bottleneck. 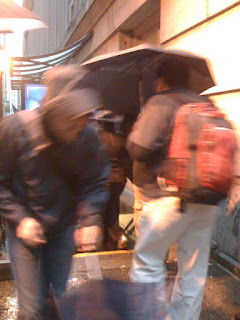 2. Individuals enter and exit the subway with open umbrellas. They remain on the prescribed sides for passing. However, note the gentleman on the left has his umbrella raised higher above his head and his fellow pedestrians to allow easy passage. 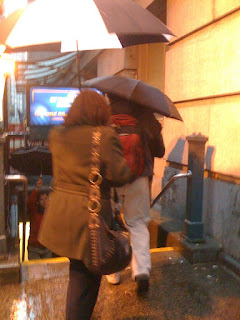 3. Taking refuge in the entrance of a bank, these red umbrella users are confronted by a black umbrella user who needs access to the building. 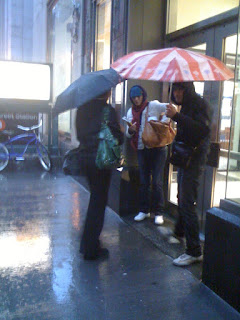 3a. The red umbrella users separate briefly opening the path to the door. 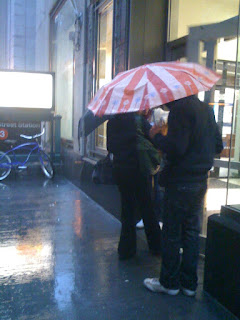 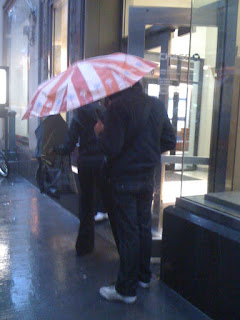 4. We even take specific steps to transport umbrellas recently used so that they cause the least amount of discomfort for fellow companions. Umbrellas are folded and held to allow them to drip excess water onto the floor. 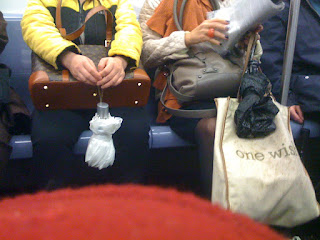 And let’s not forget those ubiquitous umbrella vendors who appear when the weather is bad. These folks are making a profit (although it may be less as more people carry umbrellas with them) by making tools available 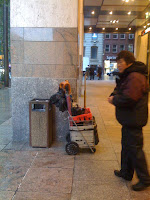 when we need them. Certainly as social organizations grew more complex, our ancestors could have identified individuals proficient at making choppers, flakes, scrapers, and awls. These individuals could have become esteemed providers of these instruments, or teachers of how to manipulate stones to achieve these results—we truthfully don’t know much about the social organization of our ancestors, so this is speculation. And the umbrella vendors of today don’t enjoy esteemed positions. Nonetheless, the availability of this tool encourages our social relationships—its influence on our social organization is evidence of this.

Do you have an umbrella story to share? Can you provide examples to the contrary—e.g., being dripped on or poked by a careless umbrella user? (I certainly have, 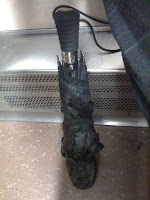 especially since I happen to be shorter than the general population, but these examples aren’t necessarily evidence that these propositions are false, rather that exceptions can exist. I’m sure human evolution is littered with examples of persons who ran contrary to social order—either unconsciously, or by choice.) Have you witnessed a complex umbrella “dance” related to a social situation—e.g., a couple on a date? Share your stories below.