The Spirit of America—Haunted and Hallowed

When describing American society, the traditional image has been that of a melting pot. The idea being that immigrants to the United States assimilated, leaving behind their traditions and values. For an emerging nation seeking to establish itself the politics of sameness may have been a unifying force. But while early immigrants may have been unable to import tools to support traditions and cultural practices, the rise of globalism eased this challenge and made it easier for immigrants to remember their histories. Increasingly today, to be American does not imply a standard set of traditions and values—there is room to remember your own roots. We are a richer culture for it. For this reason, the metaphor describing Americans has shifted to favor cultural diversity, proposing an image of a tossed salad or salad bowl: the different ingredients in the salad each retain their individual properties but are united in the salad bowl. My trouble with this image is that it doesn't account for the common element that binds people together in the formation of a nation. If we are a nation of salad ingredients, are we held together by dressing? The bowl?
There are certain traditions and practices that seem to reach through culture. They are shaped by multiple histories and adopted by most people, making them social markers. Halloween is one such observance. Its history is rooted in the past. As an observance, it has been touched and shaped by major political and social forces through the ages. Today it is celebrated around the world in some form, providing a unifying basis for many people. In America, the present form of Halloween suggests that perhaps we should consider describing our nation as a patchwork quilt. We are different elements, even unique elements, sewn together by an underlying belief in freedom. That we can all share in Halloween festivities regardless of our ancestry suggests that festivals that are flexible can not only survive, but bind people together. 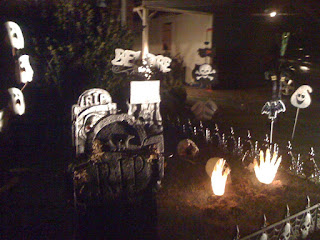 [Image: A local graveyard installed on a neighbor's lawn.]
Halloween traces its roots to the Gaelic festival of Samhain, which was marked on November 1st by the Celts. It was a harvest festival—timed to prepare for the coming cold. It was a moment of change, and during this transitory period the Celts believed the border between this world and the next was thinnest: Spirits could pass easily into this world to walk the earth. On Samhain night, the Celts wore animal skins to confuse the spirits and to avoid their tricks. It was also thought that because the spirit world was so close that this was an optimal night for divination. To thank the earth for the harvest, the Celts offered blood sacrifices, such as livestock, and Druids read the entrails of the animals to foresee what lay ahead—who would die, who would marry, etc. The predictions provided entertainment for the evening.

While Samhain was being observed by the Celts, the Romans were worshiping the goddess Pomona in a similar harvest festival. The offered her fruits, notably apples—the basis for bobbing for apples. When the Romans conquered the 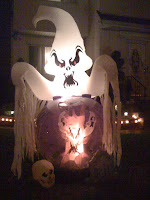 lands that the Celts occupied, the two traditions merged. However, the rise of Christianity did not permit the worship of nature spirits. A concerted effort began to erase Samhain, which stood as a symbol of paganism. The conversion of Constantine helped this cause, but missionaries found it difficult to carry out his orders, so they devised a plan to modify paganism to mask Christian beliefs. In the 8th century, Pope Gregory III turned Samhain into All Saints Day—a day to honor the saints who did not have a special day already. The eve of All Saints Day, All Hallows Day, became the day in which the practices of Samhain were observed. The "evening of Hallows" ultimately became Halloween. [Image: A modern day ghost.]
People continued to dress in animal skins, put out offerings for spirits, and mark Samhain in the name of All Hallows. In the 10th century, November 2 was pronounced All Souls Day. It was a day to honor all dead—the church's attempt to completely replace Samhain with a church sanctioned holiday. The resilience of what we call Halloween suggests it provides us, as human beings, with something we are reluctant to relinquish. Halloween permits us to believe in a spiritual world that we can reach without the intervention of a empowered other, such as a priest. In fact, it was on these grounds that the church ultimately splintered: In 1517, Martin Luther would nail The Ninety-Five Theses to a church door, discrediting the practice of indulgences, and bringing about the Protestant Reformation. Luther sought to bring people closer to god, without the help of priests or saints. All Saints Day was cast aside, and Halloween become a symbol of protest.
Halloween in the American colonies was a scant affair. The Puritans who settled here found the holiday too pagan and too Catholic. It was the arrival of the Irish in America that helped Halloween blossom: 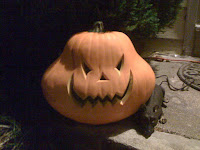 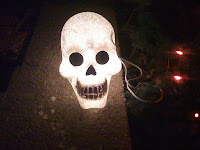 We have woven these elements together to create our own particular brand of Halloween. People add their own touches to the holiday all the time. In this way, Halloween can belong to all of us and still hold its mystique. Its survival despite the church's attempts to sanitize and edit it as a festival and observance is something that many immigrant groups can relate to—whether they do so consciously or not. And in some ways, its survival represents the American ideal: that you can come here, from anywhere, and live free of persecution and be accepted. This is an idea that many Americans hold to be sacred—though not many may know that a supposed spooky tradition embodies this ideal.

What are your favorite Halloween traditions? Share them below.