Jerry was driving home late one night when he saw a young lady waiting by a bus stop. He stopped his car and told her that he didn't think the buses were running so late at night and offered her a ride. The fall night air was getting chilly, so he took off his jacket and gave it to her. Although his passenger wasn't much for conversation, he managed to learn that the girl's name was Mary and she was on her way home. 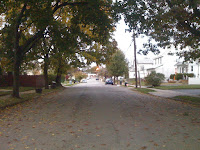 After driving for an hour, they arrived at her home. Jerry said goodnight, she went in the front door, and went home himself.

The next day he remembered that Mary still had his jacket.

He drove to her house and knocked on the door, an old woman answered. John told her about the ride he had given her daughter Mary, and explained he had come back to get the jacket he had lent her. The old woman looked very confused.

John noticed a picture of Mary on the fireplace mantel. He pointed to it and told the old woman that that was the girl he had given a ride to. With her voice shaking, the old woman told Jerry that her daughter had been dead for many years and was buried in a cemetery about an hour away.

Jerry ran to his car and drove to the cemetery. He found his jacket, neatly folded on top of a grave. The name on the gravestone was ... Mary. (Late Night Ride)
[Note: I made minor edits to this story for readability. I did not alter content or tone.]

It's the spookiest time of the year! So I thought we could have some fun this week with some Halloween themed posts. The story above is one you have no doubt heard or read at some point—perhaps around a campfire or at a Halloween party. The ghostly hitchhiker is a popular American folktale. While many variations exist, the stories tend to be rather formulaic. A motorist (usually a man), picks up a lonely hitchhiker (generally a young female), and transports her to her destination where she either vanishes or enters a house. If she enters a house, the driver usually has reason to follow her—e.g., he wants the jacket he loaned her, wants to return something she left in the car, or sometimes, if the destination is a house and she vanishes when the car arrives at the destination, he wants an explanation as to why she disappeared. When he knocks on the door, he learns from a grieving loved one that the passenger died (many years ago). If he's trying to reclaim and item, it can usually be found at her grave site. Two famous paranormal American hitchhikers are Resurrection Mary and the Greensboro Hitchhiker—both feature young women in white looking for a ride home after a night at a dance, and both women ask to be dropped off at cemeteries. (Cue spooky music.)

The age of these stories is unknown, but they have existed in the United States since the days when we traveled by wagons, and possibly even earlier than that in other places: For example, in the Bible, the Apostle Philip hitches a ride with an Ethiopian, whom he baptizes before he vanishes. There are roads throughout the world purported to host a ghostly traveler looking for a ride back to loved ones or to their final resting place. Given that this particular story is found in different variations throughout the world perhaps it signifies that there is more to these phantom hitchhikers than a simple scare. Could the stories be parables—perhaps ones that encourage altruism?

In the story above, a man stops for a young woman waiting at a bus stop and thinking of the late hour and the difficulty she may have in getting home, offers her a ride. There is an innocence here that is far removed from the mentality of our current society. I don't know many women today who would willingly rely on the assistance of a strange man even if it meant they would be waiting for an hour for the bus, One of the basic rules for survival that we learn as children is that you never, ever, ever get into a car with a stranger. And yet, time after time, these women do just that, and the men seem to have no ill intentions. They simply want to assure that the young woman gets home safely.  There is a basic concern for a fellow human being exhibited here—perhaps linked to the more distant times when relying on your neighbor was common and necessary for survival. The driver comes to no harm by helping the phantom. In fact, he has has helped her spirit rest.

The story is also plausible because hitchhiking was a fairly common practice until recently—in the 1950s and 1960s, and even into the 70s, hitchhiking was a common means of making your way around the country. This simple formula of this story also means that it's highly customizable. Jerry can easily become "my friend Harry" or "when my dad was in college coming home for the weekend," etc. Similarly, the address can be in any locality, it can be any old graveyard, the hitchhiker can belong any couple known to have lost a daughter to a car accident. During this period, there was also rise in drag racing, resulting in an increase in teen deaths overall. Songs like "Last Kiss" were based on these types of events. You may have heard the version cut by Pearl Jam which was a hit for the group. Here is the original:


There seems to be two lessons to be taken from these types of ghosts stories then. First, there is a reminder of the importance of community—that you could depend on a stranger for help if you were in need. Second, there is also a reminder to the audience about the dangers of driving too fast: you too could be doomed like Mary. (Perhaps this was also an attempt to empower girls to take a stand against dangerous boyfriends who drove too fast, particularly under the influence of a few beers.) The drivers who pick up these passengers are usually male. The phantom passengers are a shadowy fate for the driver if they aren't careful. After all, they could survive, but their passengers—their girlfriends and other loved ones—may not. These stories aren't necessarily "spine tingling," but they impart messages about society to each generation of listeners. They try and impose patterns of behavior.

In accordance with changing times, a darker variation began to emerge in the late 1970s, becoming popular and widespread in the 1980s:

One summer day, a woman pulled into a gas station. As the attendant pumped the gas, the woman told the attendant that she was in a hurry to pick up her daughter who would soon be finishing her art class.

While she was waiting, a man walked over to her car. He explained to her that his rental car had died and he needed a ride to an appointment. The location was just down the road from her daughters art class, so she told him she would be happy to give him a ride.

He put his briefcase in the backseat, and said that he was going to the men's room quickly. A few minutes passed, and the woman looked at her watch. Realizing that she would be late, she drove off quickly, forgetting that the man would be coming back.

She thought nothing of it until she and her daughter pulled into their driveway. She saw his briefcase and realized she had forgotten him! She opened the briefcase, looking for some sort of identification. All she found inside was a knife and a roll of duct tape.

This story is full of warnings and fits with the messages we learn as children about the dangers of trusting strangers. This version has grown more complicated and detailed with time. It amplifies the stranger, sending a clear warning about the dangers of trusting too easily. It demonstrates a shift in societal thinking, which in turn reflects larger events of the time. The early 1980s was a period of tremendous change: John Lennon was assassinated, Reagan was elected, and the US invaded Grenada in the battle against communism. The world was changing rapidly—and seemingly not for the better. Suddenly, you needed to be wary of your neighbors, and you needed to watch out for yourself because, as the media would later proclaim loudly, self-interest was on the rise and it could be deadly.

These stories can provide insights about the social organization of the time. In addition to providing a slight chill, they are also apt teaching tools—people of all ages are more likely to pay attention if the story seems familiar and if its somewhat tragic or frightening. There are scary stories in many cultures reserved just for frightening children to insure they behave. Does the boogeyman ring a bell? There is a lot that can be learned from folklore.

Do you have a spooky story to share? How would you alter these tales for a retelling today: Will the hitchhiker wear earbuds? Will the driver be on his way to meet a phantom he talked to online? is the murderer in the backseat a cyber stalker? Share your ideas below!
Technorati Tags: Halloween, ghostly hitchhiker,paranormal,ghost stories
© Krystal D'Costa