Did You Spit on That Bat? Rituals and Superstitions in Baseball

Update: The opening day Citi Field video appears to have been removed. I have replaced the video with a link, and included a photo in the event that video also gets pulled by MLB.

The crack of the bat, the smell of sausage and peppers, and the vendor's cries of "Beer here!" and "Pretzels!" will soon be nothing more than distant echoes—the ghosts of a season past. American baseball fans are saying their final farewell to summer with the Fall Classic. Just as spring training marks the coming of long, lazy summer days eating hot dogs and pretzels, yelling at the umpires, and singing "Take Me Out to the Ballgame," October ball means hot chocolate and gloves, jackets, and blankets (though there is still considerable yelling at the umpires and booing the opposing team). At the end of the Classic, once a champion is declared, the non-contenders lick their wounds and turn their thoughts to the next year. The fans begin to dream of spring. Until that point, however, baseball is littered with small rituals and superstitions meant to appease whatever gods are watching, and more importantly, the fans. If you do happen to tune in to watch this year's contenders, pay attention to the guy on the mound. If he's pitching a good game, take note of whether any of his teammates talk to him. And try and see if anyone steps on the foul line. And when the camera pans to the dugout, note whether the guys seem to sit in the same place. In the stands, check out whether the fans have signs and how they're wearing their hats when their team is down.
Baseball may be one of the few remaining bastions where superstitious beliefs and behaviors abound—and are actually encouraged. David Wright and his teammates on the New York Mets shaved their heads to break a slump, believing that a change and a show of solidarity would change the way their bats behaved. Wade Boggs ate chicken before every game. John Smoltz did jumping jacks for almost half an hour once to keep a rally going for the Braves. And then there's the equipment: Players should talk to their bat, sleep with it, and never, ever loan it to another player. And they should also remember to spit in their hand before picking it up. Baseball players know that missing any one of these things could mean that the fate of the game—and the wrath of at least 40,000 screaming fans—could be on their shoulders. And that's only the beginning. There are tons of superstitious baseball beliefs like these.


Whole teams can be cursed, like the White Sox. Though the most famous curse probably relates to one of the biggest rivalries in the sport—the Red Sox and the Yankees. The Curse of the 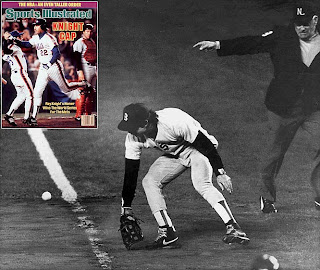 Bambino was invoked when the Red Sox sold famed pitcher and right fielder, Babe Ruth, to the Yankees in 1919. Up until that point, the Red Sox had been fierce contenders in the sport—they'd won five World Series championships, including the first title in 1903. After selling Ruth, it would be 86 years before they'd win another. In 1920, during his first year with the Yankees, Ruth hit 59 home runs—more than any team that season. He led the Yankees to seven AL pennants, and four World Series championships. From 1920 to 2003, the Yankees would win 39 AL pennants, and 26 World Series titles. The Red Sox struggled. The championship always seemed to be just beyond their reach, and a vicious rivalry grew between the two teams. They tried in vain to lift the curse, which was finally broken with the help of a bloody sock—but not before Bill Buckner let a ball through his legs in 1986 to name the Mets the World Series champs. In 2004, the Yankees and the Red Sox faced off in October. The Yankees won the first three games of the World Series. Then, in a startling upset, the Sox managed to win the next four games straight, thanks in part to Curt Schilling's willingness to pitch through an injury. [Image Above: Bill Buckner 1986 © Sports Illustrated.]

The Sox got off lucky—the Cubs are still trying to shake the Curse of the Billy Goat. And recent seasons (and really, some not so recent seasons) have Mets fans asking whether the team is cursed too. Is it the Curse of Doc Gooden? One fan has gone so far as to propose the Curse of the Cat, claiming the new Citi Field has been cursed by the cat that ran across the field during the opening game at the new ballpark (see video here). When the new Yankee stadium was being constructed, Red Sox sympathizers tried to curse on the Yankees by burying a Red Sox jersey in the foundation. Despite initially laughing at the claim, Yankee officials ordered workers to break through two feet of cement to remove the offensive garment. [Image Right: Cat streaks across field during opening day at Citi Field. Credit: Mary Altaffer/AP.]

What causes otherwise rational people to succumb to superstitions in sporting situations?
Superstitions are found in every culture. We often first encounter them as children. They are the first set of "rules" about our world that we learn—an attempt perhaps to try and exert some control over our lives. For example, these are two that you are probably familiar with:

You must hold your breath while going past a cemetery or you will breathe in the spirit of someone who has recently died.

As children our lives are mostly managed by our caregivers, so there's a small sense  of satisfaction in knowing that because you held your breath as you passed a cemetery, you—as small as you are—were able to thwart an evil spirit or prevent an injury to your mother.
As adults, we're faced with the realization (and frustration) that there still things that are beyond our control. We want to know. We need explanations. While modern technology and science have provided many answers, superstitious beliefs still persist because they offer a sense of control—and a connection. While you may not believe breaking a mirror will bring you seven years bad luck, you're unlikely to go out of your way to smash mirrors intentionally—or walk under a ladder, for that matter. You believe that in not breaking a mirror, you've done nothing to draw bad luck and so any misfortune that comes your way, can't be your fault. And if your neighbor believes he shouldn't break a mirror, then we're back to the herd mentality—the idea that we can be protected if enough people follow suit. A belief in superstitions connects us to others. If we all believe (or kinda believe) that breaking a mirror brings bad luck, then we're all less likely to break mirrors. We are consciously careful with this fragile glass. Over time, the superstition may fade, but not before a pattern of behavior emerges (i.e., don't break mirrors because the shard could cut someone).
With 40,000+ people watching anxiously as batters try to hit a tiny, fast moving ball if they don't exert some sort of control over the situation, there'll be a backlash—no matter how good they are. 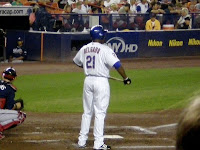 So they tap the plate, draw a line in the batter's box, fix their gloves, etc. They're showing their fans that they're ready—it's not their fault if they miss.  Their decisions are under the collective scrutiny of fans who view them as their representatives in the competition. NY Mets fans have not quite forgiven Carlos Beltran for not swinging the bat, which ended the Mets' run in 2006. These superstitious rituals give the players a sense of control over the unknown, but it also protects them. [Image Left: Carlos Delgado, NYM, gets ready to bat.]
And it connects them to the fans. In every national sport, the athletes are an extension of the populace.


An athlete who represented his people and won, conferred a distinction upon the people and the city as his victory testified to the caliber of the citizens; accordingly, upon his return, they would break down a part of the wall for him to enter through because “a city which could produce such citizens had no need of walls to defend it” (James 1963: 154). 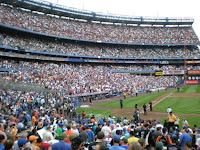 We are linked by a belief in them—no matter how poorly they perform, we have chosen them as our representatives. And our alliance to a team allow us to distinguish between each other as Mets fans and Yankee fans and Philly fans, and White Sox fans and Cubs fans can all tell you. It grants us an identity—it confers respectability. The Tomahawk Chop, and singing Sweet Caroline and Lazy Mary are rituals that unite us. They also confer an expectation that the team will win. After all, the fans are wearing their protective charms—jerseys, hats, and even sneakers—they carry signs, and bring brooms when necessary. All the players have to do is spit on the bat, tap the plate, and remember to swing. [Image Left: Crowd at Shea 2008.]


Seventh inning stretch at Shea Stadium, 2008. Fans sing "Take Me Out to the Ballgame" and "Lazy Maria."

Losses hurt that much more because of charms and superstitions.. Superstitious practices are meant to shield against these while passing the loss onto circumstances beyond anyone's control. If a team loses even after the rally caps have been put on, then it isn't for want of trying. To enter a ballpark is to believe that belief is enough. NY Mets fans know this—it's their motto: "Ya gotta 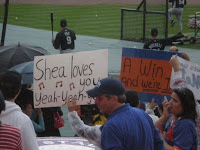 believe." The ballpark remains the last fortress of sheer belief, where the energy of the screaming masses can guide a bat true and steady. Maybe there is a little magic left in the world after all. You can only catch glimpses of it from April to October, and for some it is brighter than for others but it's there—wherever there are fans, and pitchers, batters, fielders, and catchers to perform the rituals that defy logic. When the game is on the line, the power of the crowd encompasses the staunchest critic. We're one force, and its our respectability on the line. And superstitions don't seem quite so silly. [Image Bottom Right: NY Mets Fans with signs at Shea Stadium, 2008.]
Do you throw salt over your shoulder? Knock on wood? Wear your team colors on your socks when they're playoff contenders? Let us know below!
Cited:
James, C.L.R.
1963 Beyond a Boundary. New York: Pantheon Books.