Status Symbols or Something More? Battling Big Bags on the Subway

First there were those weird shoe-slipper things called Crocs. Then came skinny jeans (which I'm still hoping will go away). And now it seems that fashion has increased the popularity of the tote. (For any men out there who don't know what a tote is, it's a largish-type shoulder bag.) Try boarding a bus or subway car during rush hour and report back on whether you had to squeeze in between a multitude of large bags. If you were able to secure a seat, did you have to practice defensive maneuvers to avoid being smacked in the head by the bag the person standing in front of you was carrying? Both men and women appear to be carrying more luggage with them during their daily travels—could this be more than a fashion statement? 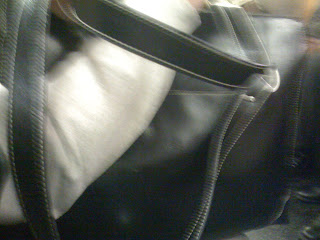 Image: This large black tote that sat next to me on the subway. 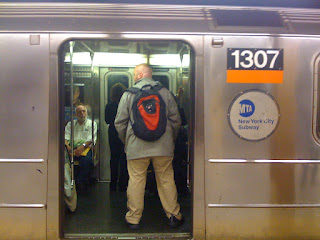 Image: Adult men from all backgrounds with backpacks are growing increasingly common on the subway.

Are people "packing it in" more? NYC is a very mobile city—if you're traveling about the city, you never know where you'll wind up, so it pays to carry extra reading material, an umbrella, a bottle of water, some snacks, and really whatever else is essential to meet your daily needs. But NYC is also a place where you can easily pick up most necessities as you go along. For example, if it looks like rain, you can be sure you'll encounter an umbrella vendor before the raindrops do any real damage. (A definite question for another day: Where do umbrella vendors emerge from? Really, they're better than the weather folks at predicting rain.) So are people carrying more with them as a result of the recession? 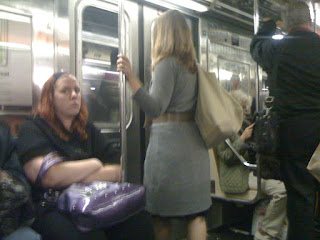 Image: Woman on subway with large canvas tote. The woman with the purple tote was kind enough to share the contents of her bag with me.

While taking pictures for this post, a woman carrying a large purple bag caught my eye (see above). She caught me in the act of photographing a particularly nice tote specimen on the subway; I was nearing my stop, so I gave up my seat and went to stand near her. I didn't have much time, but I explained I was writing an article about bags—totes in particular—and asked if she would tell me about some of the items she fit into her large purple bag. I really didn't expect her to answer, but she did! She was carrying an umbrella, her lunch containers, two bottles of water, a sweater, and "lots of little things." Buoyed by her forthrightness, I then asked a man carrying a large messenger bag if he would share the contents of his bag, and he also revealed water bottles and lunch containers, as well as a baggie of grapes. 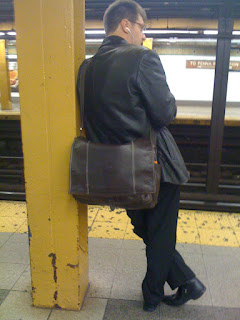 I wonder if the increase in large bags being used by both women and men reflects a reality of the recession—that is, are more people are relying less on disposable items and carrying more with them? Whether it's lunch from home (in a reusable container), water in a sports bottle, snacks packed in baggies, an umbrella, extra reading material, or even extra hair clips, people seem to be packing in it and taking it with them. This is really an instance where I wish I had been blogging a year ago because perhaps then I might have some evidence via my subway photos to support or refute this claim.  It would be interesting to note the percentage of large totes and bags on the subway in 2007 in comparison to the percentage of totes and backpacks as the credit crisis unfurled. 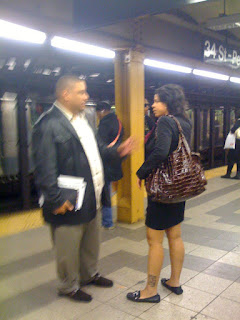 Image: Man and woman on subway platform. What role does necessity play in fashion?
If necessity is the mother of innovation, is it also a driving force in fashion? Designers such as Coach, Louis Vuitton, and Dooney & Bourke are unveiling lines of larger totes and sacks—are they matching design to fit with what has been called the "new" economic mentality or are they setting the new chic? It does, after all, make good marketing sense to design products that people will buy—and if people are looking for function over form moreso than they have done in the past, then they are establishing a new norm, and a new market. 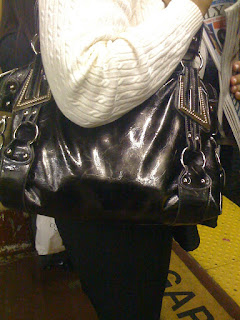 Image: Totes are pretty handy—you can fit almost anything in there!
So, what are you carrying about these days?
© Krystal D'Costa