Much Ado About the (Swine) Flu?

Have you gotten your seasonal flu shot?

Unless you've been living in some extremely remote region, completely cut off from the world (and then let's face it, you wouldn't be reading my post), you've likely heard of the dreaded H1N1 (swine) flu virus that's been making the rounds since the last flu season. Well, Stephen King predicted this would happen, so we should have been prepared! Seriously, go read the original version of the The Stand, and tell me that we aren't facing similar circumstances—well, okay, humankind hasn't been virtually eliminated except for two polarized factions aligned with opposing divine forces (at least not yet), but the part about a mutating flu virus and the resulting panic seems appropriate in this context. But all joking aside, people are definitely frightened, and its understandable to a certain degree.


Why are they frightened though? As a species, we've faced this before—something like it anyway—and (most of us) survived to tell the tale. It's a shame students don't learn more about past pandemics in history class—because pandemics have happened before. From 1918 to 1920, a version of the H1N1 virus swept the globe, called the Spanish Flu, killing anywhere from 50 to 100 million people. Approximately 1/3 of the world's population was infected. In the United States, 28% of Americans were infected, and approximately 675,000 people died. And we've faced—and spread—other viral outbreaks. Native American populations, as well as other Amerindian groups, were decimated by smallpox and other communicable diseases. And before contact with the new world, there was the Black Death of the 14th century, which caused approximately 60% of Europe's population to die painfully and grotesquely. And there have been subsequent outbreaks throughout the globe well into the 20th century. These outbreaks have been traced well into our history. For example, according to Barquet and Domingo (1997),

Smallpox is believed to have appeared at the time of the first agricultural settlements in northeastern Africa, around 10 000 BC. It probably spread from Africa to India by means of Egyptian merchants in the last millennium BC. The earliest evidence of skin lesions resembling those of smallpox is found on the faces of mummies from the time of the 18th and 20th Egyptian Dynasties (1570 to 1085 BC) and in the well-preserved mummy of Ramses V, who died as a young man in 1157 BC.

The bottom line is that viruses have been around a long time. An outbreak can be devastating, there's no doubt. And it's frightening, but we've learned strategies for coping with them that we shouldn't lose sight of.


It sometimes feels as though in this age of information, we have access to too much information. Shocking to think, isn't it? But there is so much opposing information available to a public that may not read science articles and blogs too closely, that they may have trouble deciding what information they can believe and what sources they can trust. All it takes is the click of a button to create widespread panic. Let's say a concerned mom wanted to read a bit about vaccinations before she takes Timmy in for his flu shot. She does a Google search for vaccinations and finds a link for The Vaccination Debate. Immediately, she posts information from this site on her Facebook page and she tweets about it to her network, and when she goes to pick up Timmy from school, she talks to other moms and dads picking up their kids. At home, while doing more research (because now she's worried about all the other vaccines Timmy has had) she learns about a leaked memo with information about the H1N1 vaccine. She doesn't check up on the source, and so she joins the parents who won't vaccinate their children against H1N1 due to concerns about possible side effects from the flu vaccine.


The H1N1 outbreak and the  push to vaccinate specific groups has sparked a furious debate—particularly for health care workers for whom the vaccine was declared mandatory in New York. A New York State judge suspended the regulation in the face of a lawsuit from three nurses who did not want to be subject to what they believe is an experimental vaccine. Their lawyer responded to the ruling with the following statement:

These three women are not saying, "We don’t want to be vaccinated" ... They’re saying: "We don’t need this vaccination. We don’t think, for any number of reasons, it’s effective or necessary. It might be harmful to us. It hasn’t been adequately tested."

The resulting comments from NYT readers have been interesting to read. One reader posted,

This is a victory for personal liberty, but a public health disaster.

While still another stated:

We require that students receive vaccinations before attending public schools, because otherwise we put their fellow students and instructors at risk of an outbreak. Health professionals work in close settings with individuals who may have the flu or may have compromised immune systems. It is the right thing to do for them to receive the vaccination.

And a third added,

In 15 years when you are curious as to why all three of your kids are on Ritalin, and you are having anxiety attacks, maybe you’ll have time to ponder what testing was/wasn’t done on your vaccine.

I can see both sides of the story—I wouldn't want to be injected with an experimental drug, but at the same time, if I'm hospitalized or in an at-risk group, I want to know that all the necessary precautions have been taken to keep me 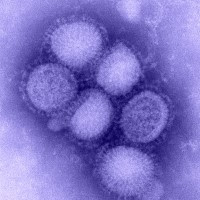 safe. I know that vaccinations against TB have saved millions of people, and Salk's polio vaccine changed the lives of countless others. A troubling aspect of influenza is that it mutates. From 1918 to about 1957, the H1N1 virus circulated in the fall and spring. In 1957, the virus shifted to a new strain, H2N2, and because people had not been exposed to the H2N2 strain previously, a rough flu season ensued. In 1977, the H1N1 reemerged with an altered genetic makeup and more people got sick. Are you seeing the pattern here? Of course, I'm not saying that you shouldn't worry, because scientists really don't fully understand how immunity to influenza work, but we have been through this before. The virus emerged, and because it was new to our immune system, we had no resistance to it and people got sick and some may have died from influenza-related complications. But over time, we developed a resistance to it, and we survived (relatively better than King's population in The Stand)—until the virus shifted and we started the cycle again. All strains of influenza can prove to be deadly, particularly to someone with a compromised respiratory system, but its not the flu itself that causes people to die—influenza is an underlying reason for death.


There is a lot of information about influenza and outbreaks available at our fingertips, but people have to go looking for it beyond a basic Google search, and given the rising panic about the availability of H1N1 vaccines, this doesn't appear to be happening. Our fear of the flu is creating disruptions in daily life activities—for example, sharing food at the office has been discouraged, shaking hands at church during a peace ritual has also been discouraged, and family members are finding themselves unable to visit relatives in the hospital. In The Stand, people start to regard each other suspiciously, and a process of shutting out others begins, so that people ultimately die alone. We've adapted to this type of environment before and we know what measures work to protect us: vaccines, hand washing, covering your mouth when you sneeze or cough, seeing a doctor when you're ill, etc. Of course, by the 19th century, it was clear the Black Death bacterium could become drug resistant, and strike with renewed vigor. Yes, it's frightening. Frightening that in today's age of amazing scientific breakthroughs that something as simple as the flu can aggravate other symptoms leading to death. But we live in an age where we can mobilize quickly and minimize tragedy. We created a vaccine for this strain of H1N1 in record time—which of course raised concerns about its effectiveness. But does it also reflect a disbelief that we could mobilize so quickly?

The evidence in favor of vaccines outweighs the consequences, but that doesn't mean that one shouldn't be cautious of course. Vaccinations do have minor side effects that almost everyone feels, such as body aches, a low-grade fever (under 101 degrees F), and soreness at the site of the injection. I know of at least one person for whom these symptoms masked a respiratory infection that caused him to land in the hospital for three days. But your health care provider should be able to accurately advise which vaccines you need—and if you're looking for more information about H1N1, the CDC has a great site with lots of information for the public (and you may want to talk to your PCP). Another good site for information is Flu.gov.


Share your thoughts on vaccines, the H1N1 virus, the flu, or my questions in the comments box below.

All virus photos courtesy of the CDC.