Understanding Otherness: 10 Lessons We Can Learn From Tourists

When anthropologists go into the field, they do so to study the "other"—i.e., the people and their culture that is different and distant from the anthropologist's own native history. Globalization has reduced some of the alien nature assigned to the other. Ethnically diverse neighborhoods, like Jackson Heights, reveal a mixing of cultures and traditions that was not possible in the early beginnings of anthropology. Yet the other still encompasses a sense of the foreign.

Nonetheless, anthropologists on their earliest field forays tend to stick out sorely. And in truth, it's to be expected to a certain degree—culture shock can be minimized, but not avoided entirely. However brief the period of adjustment, it does place a certain degree of stress on the host culture which is also experiencing a period of adjustment. To explain this point, let's consider tourists in New York City—the ever-present others who walk among us regularly. In New York City, tourists are tolerated. Yes, they bring revenue to the economy, but they also clutter the sidewalks and transportation systems. New Yorkers flow around them, accommodating them with barely concealed expressions of annoyance. The cultural and social stress they generate is real, but ethnographic researchers can learn a great deal from this group. Persons interested in responsible tourism may also find this information worthwhile. (Responsible tourists don't simply consume the host cultures they visit; they are mindful of their potential for social disruption and take steps to minimize interrupting social flow.)

Minimizing this type of transitional stress is integral to successful ethnography. Tourists can teach us much about signals of otherness. Here are 10 identifying markers drawn from observing tourists that can be interpreted as social otherness:

1. They are not dressed for work on a work day.

As the saying goes, "When in Rome, do as the Romans do." Nothing makes you stand out more than your mode of dress—which is certainly held as a primary form of self-expression in the United States. Nonetheless, anthropologists looking to establish themselves in their field sites would be well advised that if their hosts wear hats made out of palm leaves, they should do so as well. In fact, the State Department's website actually cautions travelers to certain countries—women in particular—to adopt conservative fashion styles and to research customs and traditions. Of course, tourists are on vacation, and there are many people who don't have a prescribed form of "business" dress, but there is an overall sense of colors and style that infiltrate a region or even a locality. The bottom line is that you should know where you are going—do some research beforehand. 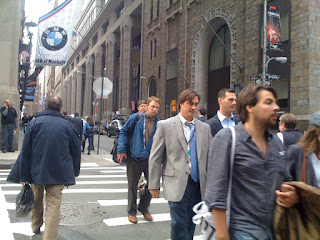 Image: In a "suit" culture, the non-suit tends to stand out. 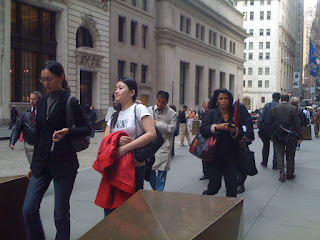 Image: Can you identify the tourists in this photo based on dress?

2. They travel in groups.

There is certainly some truth to safety in numbers, and it's wonderful to share new experiences with people you love and care about, but groups attract attention. It's easier to fold an individual into the social rhythm, than it is for a group to blend in. 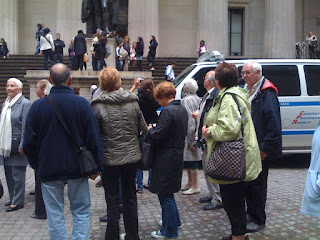 3. They prominently carry, display, and use cameras.

Photos provide timeless records—but be mindful of what and whom you are photographing. Don't lose awareness of where you are just to get a photograph. 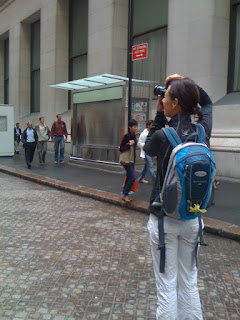 Image: Photo opportunities are everywhere—but don't lose awareness of your surroundings in seeking that perfect shot.

Of course it's new to you—but "natives" pass it every single day, and they probably take it for granted. And if they do notice it, they really aren't creating artful poses for the camera—unless perhaps they're looking for a new Facebook photo. Again, photos provide a valuable record, so take them! But again, consider the image you are projecting with your camera strapped prominently around your neck. Ethnographers may want to opt for something a bit more discrete.  And don't lose sight of social context. There are plenty of native shutterbugs. If you're trying to blend in, figure out when they come out and time your photographic adventures accordingly. And if you need an unusual shot for your Facebook profile—and it breaks with the ebb and flow of the host culture—do it quickly and without attracting too much attention. 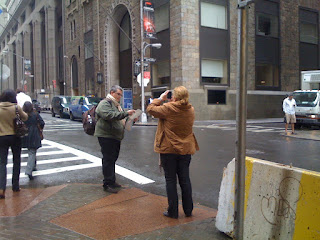 Okay, so I spent some time talking about the increased presence of large bags on the subways, but this goes back to the first signal—if fanny packs aren't the norm, don't carry them! And unless you're working and living with a nomadic people, there's no need to carry all your belongings with you. Plus large backpacks can make you a target for less savory characters—bottom line: you want to be able to move with the flow of pedestrian traffic easily and comfortably. 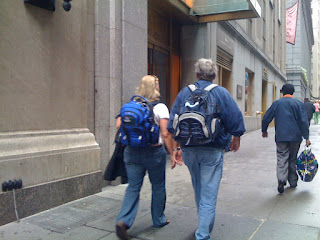 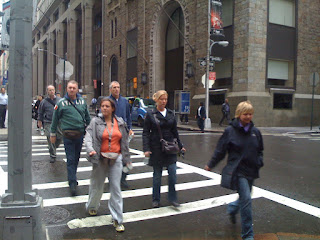 Image: Are fanny packs the universal symbol of tourism?

In most work environments, people move purposefully. Of course, ethnographers will eventually want to meet people in a relaxed environment when they are more apt to talk, but unless you're in a recreational area, such as a park, or a social meeting place, lounging about signifies that you have no where else to be—and ultimately, that you don't fit into the social milieu. 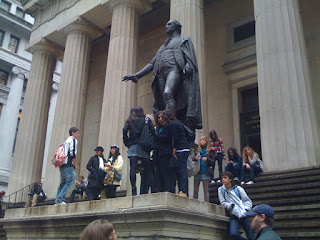 So you're in a new place on your own, and it's the first time you've ventured out. The sights and sounds are unfamiliar and the language is different. Yes, even the smells are different. This is not home! Don't panic and don't stand around looking lost and confused. Anthropologists—and really anyone looking to settle into an unknown—have to work at fitting in. So do some research before you leave your hotel room or apartment: read maps, check guidebooks, etc. Create a plan for each day that takes you farther away from your comfort zone. Make friends with a "native" if possible until you're comfortable wandering about on your own. If you want to belong, you have to plan to do so. 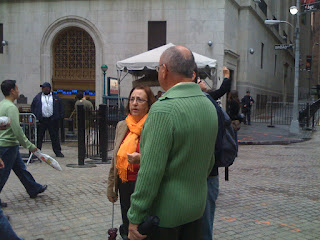 Image: "Where do we go from here?" 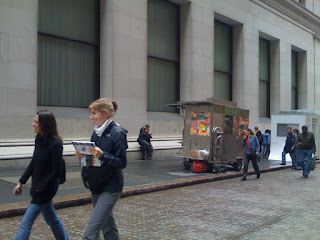 Image: Leave your trusty guidebook in your apartment.

9. They disrupt the social flow of traffic.

I think this one is the most important. I talked briefly about the stress the other creates for the host. One of the ways this occurs is through the disruption of the social rhythms of the host society. Every society has a flow, a pattern. It's not necessarily something you can learn from books. To fully understand the social flow of a place, you have to witness it, and your body needs to adjust to it. Research is still important—it will give you a sense of what to expect. A good way to acclimate to the social ebb and flow is through observation. In the early days of fieldwork, finding a good "people-watching" spot is key (and you can bring your maps and guidebooks with you for some reading on the side). 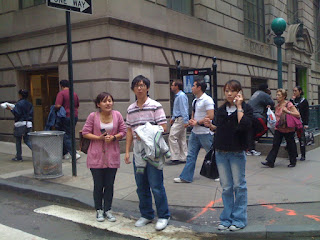 Image: Stopping on a street corner to answer a phone call holds up the pedestrian traffic and interrupts the social flow and rhythm. 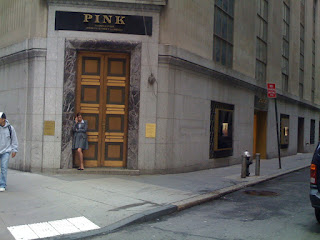 Image: Note what the "natives" do and follow along—take phone calls out of the line of traffic.

In this age of globalization, every country has a tourism trade. If you don't want to get lumped in with these others, learn what the tourist traps are and avoid them. If the natives aren't doing it, you probably want to avoid it as well—unless, of course, you're studying tourism. 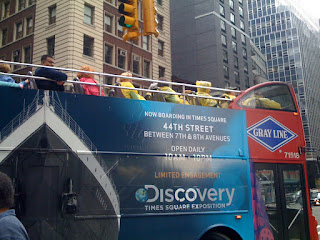 The general theme that emerges regarding signals of otherness is that there are patterns to every culture and society. Ethnographers don't come into a social setting unarmed. They sometimes spend years preparing before reaching their field sites. Nonetheless, transitions can be difficult. Understanding markers of otherness can be the first step in easing the disruptions a lack of social knowledge can cause.

Do you think there are additional markers of otherness that tourists can reveal?