Looking for examples of globalization? What kind of shoes are you wearing?

A few weeks ago, I dragged—er, convinced  my husband, Steve, to accompany me to the American Indian Museum. (He was actually a pretty willing companion, in all fairness.) 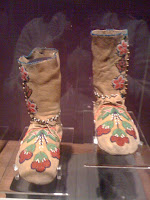 The featured exhibit was A Song for the Horse Nation, a look at horses in Native American cultures, which was truly spectacular. However, a side comment from Steve drew our attention to Identity By Design, which focused on Native women's dresses. While I was examining elaborate beadwork on a Sioux dress, I heard Steve exclaim over a pair of moccasin boots, "They look like those shoes!" He was referring to ugg boots from Australia—and with good reason. [Image Right: Beaded moccasin boots on display at the American Indian Museum.]

The word moccasin is Algonquin for shoe. The Algonquins were likely the first tribe early settlers encountered, and the word became generally applied. Moccasins were made from soft leather and sewn together by sinew. 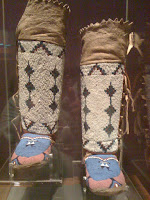 They were actually common to all Native American tribes, but were also adopted by hunters, traders, and European settlers for their durability, comfort, and adaptability. Like all clothing, moccasins offered an opportunity for cultural expression: though similarly constructed, the designs on the shoes could reveal tribal affiliation. Moccasin boots were developed by Native women as a way to preserve their modesty. Originally, they wore moccasins with high tops or leggings. The leggings were eventually sewn into the moccasins for a seamless look, and thus moccasin boots were introduced to fashion. As a testament to their design and beauty, moccasins remain popular today both among Native people and fashionistas. [Image Left: Moccasins with built-in leggings.]

To understand the possible connection between ugg boots and moccasins, we need to journey to Australia from whence the famous brand hails. Sheep shearers wear a type of moccasin which helps minimize slips and falls. One manufacturer of ugg boots credits sheep shearers with creating the name given to the popular boots:


(T)he word “ugg” is short for ‘ugly’, and dates back to the 1920’s when shearers used to wrap sheepskin around their feet to keep warm in the sheds. In fact the humble ugg boot, now a popular fashion item, was traditionally considered dowdy.


Dowdy, huh? Don't let the fashion industry hear you. (I like shoes. Okay, really, I love shoes. But even I have a hard time with these boots.) Anyway, history tells us that uggs were worn by pilots in WWI to keep their feet warm and by surfers in the 1960s for the same reason (after they got out of the water, of course). How could this type of footwear have traveled to Australia? It's not really such a stretch of the imagination to envision these comfy new shoes leaving the New World with hunters and traders in the 18th- and 19th-centuries. Australia is an environmentally diverse continent, with both deserts and rain forests, so it seems to make sense that this type of shoe would be an asset in this environment. The Native Americans lined them with different furs to increase their warmth and substituted different materials for the soles to increase durability—these shoes were very versatile.

Uggs became a sensation in the United States when they garnered press from fashion magazines following the latest trends mandated by celebrities. Many though don't quite see the appeal of these lined boots. I spotted a fellow LIRR commuter wearing a pair recently. After the obligatory exchange of good mornings, I complimented her on her boots and asked if they were really as comfortable as I had heard others claim. Her enthusiasm nearly blew me onto the tracks. Seriously. "They're so warm! I don't know how I got along without them! You have to get a pair!" [Image Left: Pair of moccasins gifted to President Ulysses S. Grant © Smithsonian Institute Press.]

Hmm. It seems that the basic appeal of moccasins survived the transition to ugg mass production—even if the beauty seemed to have been left behind. And it gives us a little bit of trade history along the way.

Love 'em or hate 'em, uggs are one way to investigate global 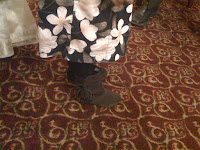 trade and the survival of traditional attire (that has been re-appropriated). I've investigated globalism at the supermarket, now it's your turn: Have you seen any "exotic" products around lately? Or surprised to find an article from your culture/tradition in the mainstream? Share below. [Image Right: Child-sized Uggs.]