Light for Us All—Symbolically Speaking

Updated to include link to NYT holiday light feature (see below).

Though Diwali and Hanukkah may be two of the more well-known festivals of light, religions and cultures around the world have have long observed festivals in the meant to drive away the imagery and meaning associated with the colder, longer days that mark the end of the growing season. Both figuratively and literally, on the darkest of days, people wish for light. As the days grow shorter and sometimes colder, and the earth stands barren until growth can begin anew, people's thoughts turn to warmth, life, and light. Light drives away the darkness. It symbolizes hope and beginnings, knowledge and safety. According to History.com,

festivals of light often occurred at the end of December because it marked the end of the agricultural season: livestock was slaughtered so that they would not have to fed in the coming cold months (and provided a supply of fresh meat that may have been scarce throughout the year), the last of the harvests were been brought in bringing a reprieve from field labor, and beer and wine had likely finished fermenting. [Image Above Right: Diyas lit for Diwali © Photofurl. | Image Bottom Left: Menorah.]
Much in the same way All Hallow's Eve and All Saints Day were promoted by the Catholic Church to replace Samhain, so too did Christmas become established in December as a means to replace Sol Invictus and Saturnalia. Christmas, literally Christ's Mass, has long been held by Catholics as the birthday of Jesus. However, there is some doubt today that Jesus was actually born on December 25th—or even in December for that matter. While Christmas is still a largely Christian holiday, there are certainly secular elements to it. Many cultures observe Christmas traditions—cards, gift exchanges, holiday decorations, etc.—without the religious overtones. The spread of Christmas practices has been aided by commercial promotions that push the traditions sans the religious elements. For example, there are non-religious holiday greeting cards, and festive and whimsical holiday wrapping paper and decorations that have little to do with the traditional Christmas symbols. While my Hindu neighbors don't have a Christmas tree, they have strung clear lights in their porch "to make their home festive, 'cause, it's the holidays." 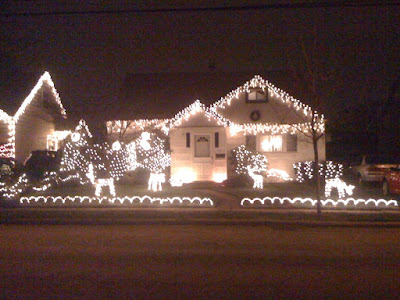 Image Above: Holiday lights adorn a neighbor's house.
The element that seems to connect both the secular and non-secular participants of the Christmas season is lights, which brings us back to the roots of the season's festivals. Our connection to light seems to be universal—meaning, whatever our religious or cultural beliefs, light holds the same symbolic meanings for us all. This shared connection is apparent throughout history: the presence of temples dedicated to the sun, the orienting of temples to face the sun, and the worship of sun deities attest to the connection we have felt through the ages to light. More than just a colorful holiday decoration, in their own way the stringing of holiday lights seems to echo humanity's earlier attempts to invoke the power of light. 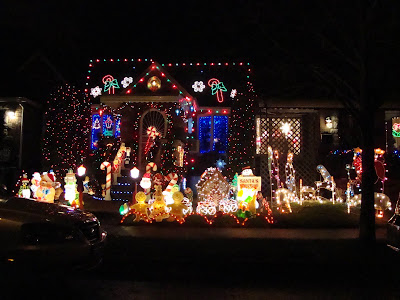 {Image Above: Another holiday home.]
However you choose to drive the darkness away, know that you aren't alone. People have been looking for ways to celebrate light throughout the ages. Do you know of or practice a light festival? Share below.

Also, the NYT has a feature on holiday lights as submitted by readers, which you can view here.
© Krystal D'Costa