In Pursuit of Life, Liberty, and Happiness—and the Right to Fish

Winter has finally arrived in the northeastern United States, so my thoughts have naturally begun to turn to summer. Believe me, after having the wind cut through clothing that you apparently layered in futility, you'd be wishing for warmer days too. During the summer months, my husband Steve and I tend to spend a lot of time near the water—living on an island, it's not really all that hard to do. He is an avid fisherman.* I prefer to lounge on the sand with a good book, but I watch. And take (mental) notes. And I've even brought in a fish or two myself (mainly flukes). This simple sport brings immense pleasure and satisfaction. It links us to one of our earliest means of sustenance, and reminds us that not all foods need to come from the supermarket in brightly colored wrappers—nature may still be able to support us if only we could learn to take only what we needed.

A few weeks ago at the car wash, the car ahead of us drove in covered in mud and blood. The owner had been hunting in Maine and informed us he had "bagged" a 600-pound moose. While I stood there trying to picture the moose strapped to this guy's car rack, Steve struck up conversation about his own catches out in Montauk, home of the monster striped bass. Our new friend informed us that he and a few buddies were thinking of staging a rebellion by taking some fishing rods and throwing them in the water. That got my attention—my ears tend to perk up at the word rebellion. Steve nodded sympathetically, and pulled a fishing license out of his wallet, saying, "Yup. I hear you, but I've got my license to fish. Not taking any chances." 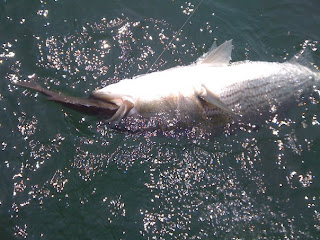 [Image Above: A striped bass takes the bait in the waters off of Montauk. Photo Credit: S. D'Costa]

My expression at the sight of Steve's license could only be described as incredulous. This was the first I had heard of licenses being required for recreational fishing on Long Island, and with good reason—the requirement only went into effect in October. 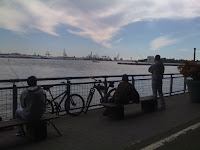 And I was a little incensed when we climbed into our car. I thought that requiring a license for residents to fish in waters they have known all their lives was absurd. But after talking to a few fishermen and visiting the major forums, my outrage was tempered. I do believe in licensing. I don't operate a car without one. My driver's license functions to  provide a means for taking action when I do something wrong on the road—i.e., I have a license, and must therefore know the rules, so if I decide to pull an illegal u-turn, I can be charged with a fine or other penalty. And if I incur enough penalties, I can lose my right to operate a vehicle. [Image Right: Fishing the East River.]

Despite my misgivings and uncertainty about fishing licenses, I absolutely think that catches need to be regulated: undersized fish need to be thrown back; fish need to be caught in season to allow them to grow to maturity; and we have to adhere to the daily possession limits (e.g., per day: 2 flounder, 15 blue fish). I do agree that if you're caught with an undersized fish or a fish out of season, well, you're a fish out of water, buddy. Good fishermen are responsible fishermen—they know that in order to be able to fish in the future, you have to leave something to catch, which means not keeping fish over the daily limit or taking undersized fish home. 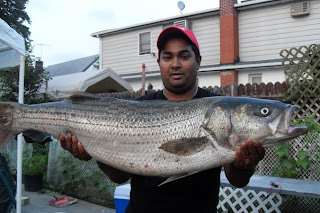 The problem is that not everyone out there with a pole is a responsible fisherman, and some fishermen believe that a license may mitigate some of the wrong-doing. Right now, fishing is regulated by Department of Environmental Conservation (DEC) officers who perform random checks of buckets and coolers, particularly at the docks where—up until recently—anyone could walk up and throw out a line. On fishing charters, sometimes called party boats, the boat can be fined if DEC officers meet the boat at the dock and passengers are found with unsuitable fish. The mates regularly toss small or unseasonal fish back into the water, although there are ways to get around this. [Image Left: Fisherman with striped bass.]

I think the reason I had problems with licensing was because I was grappling with the following question: How would a fishing license change regulation? Well, the license would function like the driver's license. It wouldn't necessarily stop everyone from wrong-doing (like illegal u-turns, or keeping an undersized fish), but the harsher penalties that come with being caught as a licensed fisherman would hopefully deter a large number of illegal fishermen. But getting caught would still be a matter of chance. The license would not guarantee that everyone would do what they were supposed to do. And in this sense, it doesn't seem to be anything more than a way to generate revenue for the state.

As you can imagine, the reaction from the fishing community on Long Island has been loud. A growing number of fishermen, led in part by Stuart Vorpahl, are mobilizing to reclaim the waters off of eastern Long Island for recreational fishing. Vorpahl is a commercial fisherman who has been fishing without a commercial license since 1984, when commercial licenses became mandatory. He has been arrested four times. However, Vorpahl has no intention of becoming licensed because he claims that the state has no right to regulate fishing in the region thanks to a 313-year-old colonial decree known as Dongan's Patent. And recreational fishermen are apparently protected under the patent as well. In 1686 Governor Thomas Dongan placed the responsibility for the management of the local land and waterways of eastern Long Island in the hands of locally elected trustees. Vorpahl and others maintain that the Patent still holds, and therefore the state has no right to issue and collect fees for licenses (which would go toward conservation efforts [see page 2]). Six Long Island towns have since filed a suit against the state's DEC saying that the state has no authority to demand a license for fishing in the waters off their shores. Undoubtedly, concerns regarding summer tourism have their place in these lawsuits since eastern Long Island is known for its summer recreational activities.

While most recreational fishermen have an opinion, the responses to the licensing mandate seems to be mixed. Yes, some are incensed, but still others view it as a step in the right direction. Those fishermen who regularly throw fish back that are too small or over the permitted daily limit, even while they watch others pack in small fish, are fed up. The fines for keeping fish that you shouldn't have are already hefty. They will be even heftier once the new licensing regulations are actively enforced, 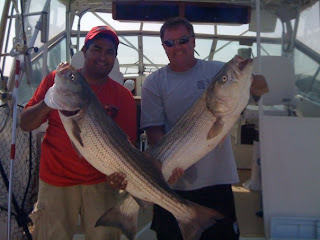 and may ultimately result in the guilty party being banned from fishing. Currently, the DEC is opting to educate the fishermen they find without a license—no tickets seem to have been written yet, but stern warnings have been issued about the consequences of fishing without a license in the future. So licensing will hopefully reduce the number of people fishing illegally. And while there isn't much in the process of regulation that can change, hopefully, the penalties that come with being caught will act as a deterrent. That's not to say that those who oppose licensing are not responsible fishermen—they want to fish without interference, and insist they can be trusted to adhere to regulations, but can the same be said for others? Those who are anti-license have concerns about whether their fees would actually be applied to conservation and have questions about who would regulate that distribution—and it's a fair question. [Image Left: Happy fishermen with their catch.]

As for Dongan's Patent, can a 313-year-old document be applied to the present day? I certainly hope so, given the age of our Constitution, but perhaps there is room for an adjustment. If Dongan's Patent gives the responsibility for the management of the waterways to the localities, 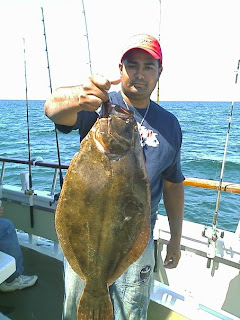 then perhaps the localities need to take a stronger stance in managing the waterways. If they don't want to license fishermen, then they need to regulate the catches more stringently, which means more dock and cooler checks. Do they have the manpower for this? It's doubtful. So we come back to licensing. Perhaps they should get to keep the revenue and apply the funds locally. Regardless of the solution, someone needs to regulate our natural resources. It's the only way to curb illegal fishing. And if the localities begin to manage the waterways, then they need to apply the same rules across the board, so they still seem to need a DEC-like organization. [Image Right: Keeper fluke caught on the fishing charter, Laura Lee.]

What's your take on Dongan's Patent? Does it still hold water? Is the DEC out of line for requiring licenses? Who should primarily be responsible for protecting our natural resources—the state, or the locality? Come on, cast your line below.

*Note: The terms "fisherman" and "fishermen" refer to all people who fish for recreation.