Following my recent post on street performers, also known as buskers as I recently discovered, I've been noticing them everywhere. Their proliferation is probably due in part to the charity of the holiday season—I wonder what their tips have looked like this year.

In any case, this group at Penn Station was really groovin'. The brass players had a number of passersby tapping their feet and bobbing their heads. And one of the band members kept breaking into an impromptu dance. The diversity of the group was also noteworthy—the musical language crosses all divides it seems. I just had to stop for a second and capture them for you all. Hope you're picking up good vibes from this group via the network effect. 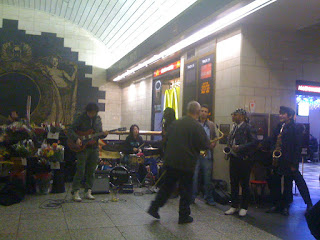 [Image Above: Buskers at Penn Station. Center horn player in the midst of his dance.] 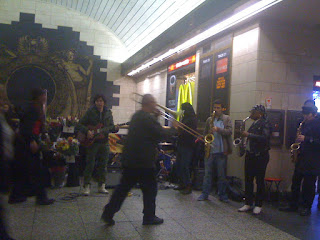 [Image Above: The horns get fired up.]