Music and the Counterpoint of Humanity

What is it about steel pan music that stops me in my tracks? This was the question I posted to my Facebook status last week after stumbling on a steel pan musician at Penn Station. The melodies he coaxed from the steel pan made me pause, and I went digging for the change in my pocket, something that I rarely do. Steel pan music reminds me of my heritage—something that Facebook users were quick to point out, referencing both a longing for home and my nationality as reasons for feeling this connection. Music has this power—to recall a memory, to transport us, to connect us.

New York City is known for its public performers. They can be be found on street corners and subway platforms. 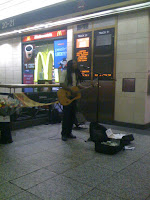 They range from simple musicians to full bands to complete shows with lithe acrobats. Good ones draw large crowds, but even the not so good performers will gain a solitary audience member until the train pulls into the station or the light changes so pedestrians can cross. Why are we drawn to music? Particularly public music? Is it something more than a momentary distraction? [Image Left: Performer at Penn Station.]

My first social science endeavor dealt with music. I had an English teacher in high school who was young and enthusiastic; his ideas didn't always jive with the administration. For example, he learned that our school bell system could be programmed to play music instead of tones. He managed to persuade the administration to permit the bell system to be modified: instead of a tone to signal the end and beginning of classes and three minutes of silence during the passing, there would be three minutes of music to accompany students during the passing between classes. The exercise was over relatively quickly—the administration found the music disruptive. Teachers felt they had trouble getting their students settled down for the lesson.

At the time, I was reading about the use of music to relieve stress. There have been studies done linking reduced levels of cortisol (a stress hormone) to exposure to music. I remember being particularly intrigued by reports of surgeons piping in music to ease their (and their patient's) anxieties about the process. It kept them relaxed. Of course, this isn't really new information. There's a reason music is played in fast food establishments and in shopping malls: more than just background noise, it sets a mood. Holiday shoppers are more likely to spend if they are feeling like its a "Holly Jolly Christmas" and people tend to eat more when there is slow, sad music in the background. If there was evidence that music influences mood, and it was being used to this effect by larger parties, then could it have a benefit in schools? Beyond creating unruly, distracted students, that is?

Possibly. If surgeons were using music to calm their nerves, then perhaps I could make an argument about productivity. The study I designed used classical music during passing, and teachers reported through qualitative assessments that students seemed more relaxed and productive. The administration would not permit quantitative analysis, which I proposed could be done through examining test scores (collected with all identifying information removed, of course.) I tested this hypothesis in three high schools, and the results were the same—music has a effect on mood which could be linked to productivity, but the question of why remained unanswered—how can music manipulate the collective?

Music can be a connective agent because we feel it. While we may have different emotive responses, we feel music in the same ways—our bodies respond to it similarly. 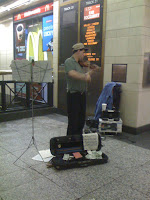 At the 14th Street-Union Square subway station, there is sometimes a brass band that performs. They usually have a large crowd, and the beat grabs every single spectator. Regardless of color, creed, or age, heads bob, feet tap, and bodies sway in unison. Music has the ability to link the counterpoint of human existence. Counterpoint is a musical term. It refers to the harmonizing of independent elements—dissonant chords, if you will, coming together to create beautiful sounds. Jose Marti, a Cuban revolutionary writer and political theorist (and quite a bit more, but you can read about him if you're interested by clicking on his name), wrote in a style of counterpoint. He took different frames of thought, different subjects, different styles, and wove them together to talk of revolution, of being. [Image Right: Violinist at Penn Station.]

Marti saw our connection to the natural world as something that could be used to link us all—giving us terms, expressions, and feelings, that we could all understand. He felt that poetry particularly exemplified this connection, and that Walt Whitman excelled at weaving these narratives:


"The truth is that his poetry, though startling at first, leaves a delightful feeling of convalescence in the soul tormented by the diminishment of the universe. He creates his own grammar and logic. He reads the eye of an ox and the sap in the leaf."


Literature, he felt, spoken in terms of nature is something that we can all understand. It has cadences, rhythms, and melodies. We feel it much in the way we can feel music:


To the greatest number of free men and workers the Earth has ever seen corresponds a poetry of wholeness and faith, grave and soothing, that rises like the Sun from the sea, setting the clouds ablaze, edging the crests of the waves in fires, and rousing the nestlings and the drowsy, flowers in the teeming jungles along the shore ... everything breathes out its own music.


The poem Whitman composes to mark the death of Lincoln speaks in these terms. He captures the pain of a nation in nature, and it becomes something that everyone can relate to, something that is preserved through time:


Literature—which announces and propagates the final, joyous concordance of apparent contradictions ... Literature, which inculcates men's fearful spirits with a conviction so rooted in definitive justice and beauty that the penuries and uglinesses of existence do not dishearten or embitter them—will not only reveal a form of society that is closer to perfection than any now known, but will also, by felicitously conjoining reason and grace, provide Humanity, ever eager for marvels and poetry with the religion it has awaited in bewilderment since it became aware of the emptiness and insufficiency if its ancient creeds.


Music is literature and literature is music. These forms of expression maintain a link to the natural world, which is what we feel. 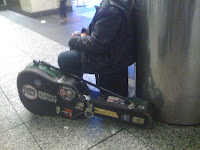 Poetry, like music, can bring us together, excite us, send us to the depths of despair, much in the way a gray swamp bird singing its lonely song against a bleak landscape can evoke despondency. Music captures these rhythms, which are encoded into our understanding, despite our backgrounds—sounds of joy are recognizable, as are sounds of sadness. If you are ever fortunate enough to attend the wedding of someone from another culture, pay attention to the music and compare it to other joyous tunes from your life. You will certainly find similarities. Universities have "fight songs" for this reason. They're a good way to get the crowd going, yes, but they remind the crowd and team of their connection. Couples choose wedding songs to form a connection with each other and their guests. This shared experience has the power to induce collective moods and experiences, which possibly lay at the root of my early social science forays. [Image Left: A guitar in transit.]

For me, the steel pan connects me to other Trinidadians in transit. It connects me to my relatives whom I have never met. It reminds me of a shared history. The next time you come across a street performer, stop and take in the show. 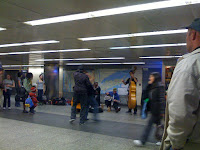 If you find yourself nodding your head or swaying along, give a sidelong glance to see if your neighbor is doing the same. Let the social rhythms override your differences. And carry the collective mood with you. if you find yourself being more productive or pleasant, share the network effect. [Image Right: Band plays swing; couple dances in the foreground.]

Have a favorite song? How does it make you feel? Remember the fight song from you alma mater? What was the effect on the crowd? Talk back below.