The Five Points Then and Now: Ghosts of Tenements Past [FP4]

For such a small area, the Five Points really has a great deal of history connected to it. Walking through present day Chinatown, I was really struck by how various elements of the Five Points have persisted through time, and have managed to impart some of the old character into the neighborhood. The streets bustle with throngs of Asian residents, reminiscent of the earlier immigrant settlers who called the Five Points home. The streets themselves, crowded with buildings, narrow and winding, hearken back to a time when you might have gone out of your way to avoid Mulberry Bend, Mosco, or Pell Streets for fear of harassment, robbery, or worse. Many of the buildings that line these streets are tenements that date back 100 years or more, and are still very much in use by immigrants seeking affordable housing, as is the case with the building at 65 Mott Street. Residents of these buildings often shared commodes and other facilities—and while some of these buildings may have been updated, the structure and layout remain. So has life really changed in the former Sixth Ward? Let's take a look at living conditions in the Five Points through the ages and find out. 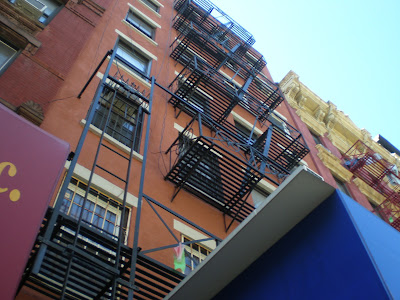 [Above: 65 Mott Street, the first building in New York City constructed specifically for tenement purposes. April 2010.]
The Five Points was a largely immigrant neighborhood—its residents were a mix of Irish, Christian Germans, Jews, Italians, Scots, with some native-born Americans and African Americans thrown into the mix (Anbinder 2001: 28). And while reporters crafted an image of intermingling between the groups, the fact is that racial, ethnic, and intraethnic housing segregation was common. 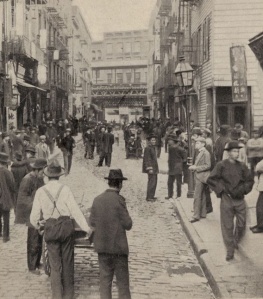 In other words, the residents of the Five Points did what immigrants all around the world do: they settled with and near those who were most similar, and familiar with their ways. The Irish in particular tended to cluster together, particularly those from Kerry with 84% of them living on Baxter Street (between Worth and Leonard Streets) and Worth Street (between Centre to Baxter Streets). This clustering added to the overcrowding that contributed to the neighborhood's reputation, as families took in relatives who had newly arrived in America. (Families also took in boarders to help cover expenses, but we shall get to that shortly.) West Coast Chinese transplants fleeing discrimination began arriving in the 1870s. The Asian population grew steadily: In 1870 there was a Chinese population of 200; in 1882 the population was up to 2,000 residents; and by 1900, there were 7,000 Chinese residents (though fewer than 200 were Chinese women). As they settled in the Five Points, they did what others had done before them: they clustered together, they took in friends and family members as boarders, and they tried to make a living. [Right: Pell Street, 1910.]
Tenements in the Five Points were made from wood and brick. The wooden structures measured about twenty to twenty five feet wide and twenty five to thirty feet deep, and stood two and a half stories high at most. These buildings were originally intended for artisans and shopkeepers businesses, and were meant to house their families and perhaps a few employees. By the 1850s, most of these "shops" had been carved into small apartments with space for a shop or saloon on the ground floor. This setup is still typical in the buildings that line Mott and Pell Streets today, as shopkeepers run their businesses from tiny, cramped facilities on the ground floors of densely packed short-storied buildings that seem to run into each other. 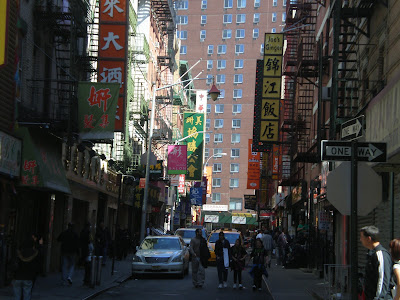 [Above: Pell Street, April 2010.]
Conditions in these buildings were terrible. Rooms were windowless, the building was drafty and prone to assault by the elements, and it smelled as outhouses were severely taxed. (Yes, I am aware that mentions of offensive odors are fairly common in this series of posts.) Anbinder writes:

According to the census, the typical two-room dwelling held on average "only" five people per apartment. Yet 46 percent of these apartments housed six or more people, and one in six accommodated eight or more. With so many people per apartment, and so many buildings per lot, the population density of the Sixth Ward in the 1850s (310.4 per acre) exceeded that of any other district in the city. With the possible exception of one or two sections of London, antebellum Five Points was the most densely populated neighborhood in the world (2001: 75).

Brick tenements were slightly sturdier and by 1855 they constituted the majority of the housing options. However they offered no better of a living experience. While 65 Mott may have been one of the first brick structures built for this purpose, it was far from the largest. According to historian Robert Bremner (1958), the Workmen's Home, which would come to be known as The Big Flat, was the largest multiple dwelling built in New York before the 1880s. It covered six city lots, spanning Mott Street to Elizabeth Street, and contained 87 apartments which rented at $5.50 to $8.50 a month. Bremner writes:

In most of the apartments only one room had access to outside air, and the inner rooms were always dark and practically unventilated. As often as not pressure was inadequate to carry water above the street floor. In winter the toilets, sink traps and water pipes, which were outside the building, froze solid (1958: 55).

It has long been the opinion of historians—and journalist and reformer Jacob Riis—that capitalist greed was to blame for deplorable living conditions of the Five Points. However, economist Michael Montgomery (2003) proposes that even though government was lauded for its efforts to clear the slums, building regulations in New York City actually contributed to their persistence, which is what created the market conditions allowing the slums to endure well into the 20th century. Yes, it's true that landlords tried to maximize profits by packing in as many structures as they could on their plots, and minimized expenses by performing the barest of repairs. However, it's worth noting that construction and management of the tenements was really a "mom and pop" operation—funds were limited and owners could not afford to purchase multiple lots, so they tried to maximize the return on their investment. Montgomery argues that the regulation that passed in 1811 stipulating that lot sizes could not exceed 25 by 100 feet severely hampered building opportunities because it encouraged the building of small, elongated structures where central rooms would have had limited access to light and air—key features of the tenement structure.
[Left: Wooden tenement housing in NYC c. 1850s | Right: Conditions at a 5-cent lodging house on Bayard Street.] (Click to enlarge.)
As this regulation applied to all of the city, it may surprise you to know that many wealthy residents lived in buildings with similar structures. The difference was that the wealthier residents lived on better streets, did not overcrowd buildings, demanded higher quality construction, and had better amenities (e.g., running water) (Montgomery 2003: 500). This was also noted by Bremner who indicates that in the 1860s, housing for "moderately well-to-do" families had no better provisions for light and actually had less attention paid to fire safety (1958: 56). Montgomery argues that if the city had eased height restrictions, taller buildings would have alleviated some of the demand for housing. In conjunction with the height restrictions, laws mandating changes to tenement house construction made newer tenements more expensive to build, which priced out lower income individuals from access to these buildings. The result was that older style tenements were even more crowded!
In 2003, writer Jack Newfield set out to determine how and if things had changed since Jacob Riis wrote his rally to reform, How the Other Half Lives. He determined that in Chinatown, the legacy of the slums manifested itself strongly post 9-11. Due to police checkpoints, traffic hindered delivery for garments made in many of the local sweatshops, which were forced to close putting many people out of work. He found families doubled and tripled up in apartments trying to make ends meet. The situation was made worse by "Chinatown's immigrant character":

This includes a cash-based economy, a dearth of documentation and credit histories that are needed for government or charitable assistance, and many middle-aged workers with a limited command of English.

The image he paints echoes of a neighborhood that existed almost 200 years ago, when immigrants packed in together to weather hard times and make ends meet. When their "immigrant character" also prevented them from accessing better jobs and city services. 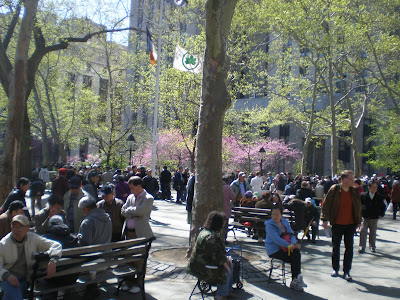 [Above: Asian families gather in Columbus Park on a Saturday afternoon for music, dominoes, poker, and general conversation. April 2010.]
The vegetable and fruit carts that lined Mulberry are largely gone. Newsboys no longer hawk papers. Children no longer sell matches or offer to sweep the street for change. But perhaps as a fitting end to New York City's Immigrant Heritage Week we should ask, is the Five Points really gone or does it linger in the "immigrant character" of today's Chinatown?

[Update 5/5/10] I leave you with this video taken in Columbus Park (former Mulberry Bend). Close your eyes and let the sounds transport you back to a time of opium dens and saloons. Apologies in advance for the shakiness of the video in places—and for the number of tourists who pop into view.