The Five Points and the Collect Pond: Ripples Through Time [FP3]

The story of the Collect Pond is integral to the story of the Five Points itself, and it is a prime example of the how the relationship we have with our landscapes can impact our social order. 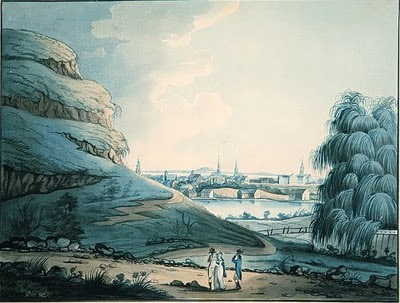 Real estate has always been important to this city, which quickly expanded beyond its early boundaries to fill the island. The serene Collect Pond, and nearby Bunker Hill, were prime destination spots in the 17th and 18th centuries. The Collect was a large, sixty-foot deep pool fed by underground springs. It was originally named by the Dutch “kolch,” meaning “small body of water.” Another source lists its name as "kalck," meaning chalk or lime, in reference to the shells left by Lenapes and other Native Americans who had harvested oysters nearby. [Is there a Dutch Reader who can correct the spelling/interpretation? It would be greatly appreciated.] Regardless, following the English capture of New Amsterdam in 1664, the name was eventually corrupted to “Collect.” [Right: The Collect Pond, 1798; Archibald Robinson]
The Collect was important to New Yorkers for more than just recreational purposes—it was also the city's source of freshwater for many years. That is until local industries took up residence on the shores and began to dump waste into the water. A range of tanneries, breweries, ropewalks, and slaughterhouses shared the area, and the result was that by the late 1700s the water had begun to sour and stink.
Stagnant and dirty, something needed to be done about the pond, and so in 1805 or thereabouts, the city constructed a canal intended to drain the Collect into the Hudson and East Rivers. The canal soon also began to stink, and it was eventually moved underground as a sewer. Its former path was widened to become Canal Street. When this plan didn't work as intended, city officials elected to raze bucolic Bunker Hill in 1811 and use the earth to fill in the pond to create housing for the growing population. 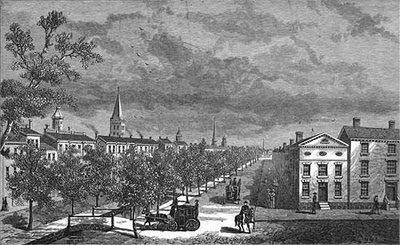 [Above: Canal Street. The canal ran along the center, and was lined by trees meant to minimize the smell for nearby establishments.]
As with any venture, marketing is important. The neighborhood that arose in this spot was named Paradise Square. Unfortunately, the land never fully settled. It was marshy, and mosquito-ridden, prone to flooding, and when buildings in the area began to sink—and the area began to smell—in the 1820s, the remaining wealthy residents fled the once desirable address. Immigrants and African Americans, seeking low cost housing as it was all they were able to afford, filled the area. By the 1830s, the neighborhood had settled into the Five Points, sporting a reputation as a dirty and dangerous place, which would thrive into the 20th century. 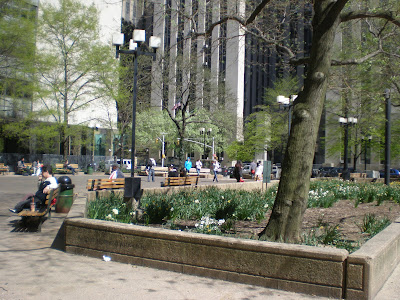 Today, the Collect is marked by a small public park located on the block bordered by Lafayette Street, Worth Street, Centre Street, and Duane Street. The area still sits lower than the surrounding land, and seems to still be shifting given the numerous cracks in the sidewalks and the surveyors scattered throughout the neighborhood. It's interesting to think that such a notorious place could have had such a serene origin. But the story of the Collect, and the resulting consequences from its mismanagement, is a prime example of the connection we have with our landscapes. And the power landscapes have in shaping our lives. [Right: Collect Pond Park, April 2010.]
For more on the Five Points, click here.
© Krystal D'Costa