Lessons from Baseball: Building a Community Around Tradition [Updated]

"People ask me what I do in winter when there's no baseball. I'll tell you what I do. I stare out the window and wait for spring".
Rogers Hornsby

I was in Port St. Lucie, FL this past week for a taste of Spring Training with the New York Mets and a break from the gray, rainy, hectic life of New York City. Spring Training is a very important seasonal rite for baseball fans. It means that warm days aren't too far away and with them will come Saturdays at the ballpark with sausage and peppers for lunch. 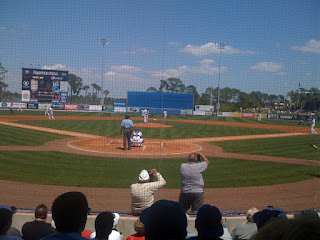 It means night games under the lights as the air crackles from the heat being released from the sidewalks and buildings. It means singing Lazy Maria during the seventh inning at Shea CitiField. Opening Day is indeed a homecoming, but long before the season is even a glimmer on the horizon, many fans make the annual pilgrimage to the warmer regions where the clubs hold camps. Spring Training is a means of welcoming the change in seasons and marking the changes in the sport itself. [Left: Spring Training game at Tradition Field, March 19, 2010].
Changes are plentiful in baseball. Players, coaches, and managers retire, are released, or are traded. Others are added. And these changes can impact the dynamics of the team and the relationship the club has with its fans. Uniforms change. Stadiums and ballparks are rebuilt and renamed. But beyond the rules, the emotional connection fans have to the sport remains an important element in keeping with the tradition of the game. The sport is hopelessly intertwined with events in the individual fan's life and comes to represent something larger than nine innings of trying to hit a tiny, speeding ball with the equivalent of a stick. For many a fan, baseball represents a connection to their own past, to family loyalties that are handed down and defended with each generation. This connection is the reason fans remain loyal after moving to a state with a different home team because it helps tie them to their own story. The traditions connected to the sport are deeply personal and varied: tailgating before the game, looking for change to pay for the "cheap seats," waiting endlessly at the players entrance in the hopes of getting an autograph, the seventh inning stretch, watching the game with a loved one—all were cited as examples of traditions individuals associated with baseball.
The Mets have captured the essence of this feeling with their aptly named ballpark, Tradition Field.  Formerly the Thomas J. White Stadium, (a Florida politician responsible for bringing the Mets to Florida), the ballpark was renamed in 2004 when the nearby town of Tradition purchased the naming rights. 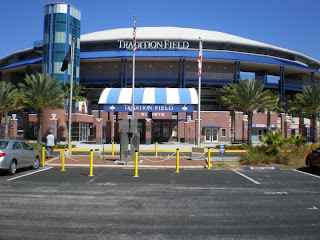 With a name like Tradition, you would think that the town had been long established, but it's a planned community founded only in 2003 by Core Communities, LLC. The town is composed of several smaller villages arranged around a central hub, complete with a picturesque Town Hall. What's interesting about the relationship of the township to the ball club is that the two are supported by the emotive responses to the feelings of tradition. Tradition, FL bills itself as a "return to the days when your town had everything you need"—including baseball in a small town way, perhaps as your grandparents remember it. The town of Tradition has built itself using the power of memory by choosing a name that evokes a sense of notalgia and personal meaning. [Tradition Field, home of the New York Mets, the Gulf Coast Mets, and the St. Lucie Mets.]
And it's a great tactic. The ballpark has a homey, local feel to it that's greatly different from the atmosphere at CitiField, and one expects it to be so. There are only two "tiers" of seating, plus a large "berm" area (another Dutch word, by the way!), and with families and older folks milling about, you get the sense that this is what baseball was meant to be (even in the majors): a way for a community to come together. Of course winning matters because pride matters and the community's pride is at stake, but there's also a sense of simplicity. It is all carefully manufactured to allow you to experience baseball as it is meaningful to you. In an era of corporate sponsorship, it's something to think about: the ties a team has to a community, and the importance of the names associated with the club in terms of connecting with the fan.

Updated 3/23: It was announced today that effective immediately the stadium has been renamed to Digital Domain Park. I'm interested in knowing how this may affect fans' relationship to the ballpark—and also saddened at the loss of such a meaningful name.
© Krystal D'Costa