Is Your Time My Time? Deconstructing "Social" Time (3)

I've been doing a lot of sifting through the articles and books I have on Time, and some graduate writing I did on the subject. And I think I'm ready to address my question as to whether there are parallels in Intersubjective Time. To do so, we're going to take a trip to the Caribbean. (But first I recommend you check out Part 1 and Part 2 of this series if you haven't already.)
Anthropologist Kevin Birth—whom I studied with as an undergrad—has spent much of his career immersed in the lives of Trinidadians who often take liberties with their Time. Trinidadians are linked to the saying “any Time is Trinidad Time” which refers to their willful disregard for the secular clock that often results in them showing up late for social events. 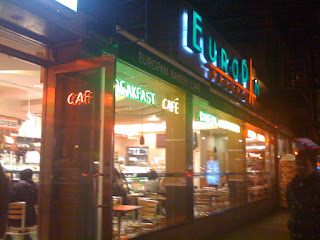 I like using Trinidadians in this discussion because "any Time is Trinidad Time" seems to closely mirror attitudes in New York City regarding Time—not that the secular clock in New York City is ignored, but Time is actively managed instead being a manager. Trinidadians actively manage their time by choosing when to attend events, just as New Yorkers manage their time by circumventing circadian rhythms. [Right: Late night diners, NYC. March 2010]
In Trinidad, Birth (2006) uncovered some interesting arrangements of Time when he grappled with the phrase “long time.” This term refers a way of comparing the past to the present or situating an event many years in the past (often occurring in the recollector’s youth). Birth reveals memories tend to cluster around “landmark events that fall in the realm of the subjective” (3).

Birth unveils four ways Trinidadians structure Time to represent the past: reference to date, reference to the years separating the past event from the present, reference to a stage or age in one’s life, and reference to an event or period publicly recognized as historically significant (2006: 5). What Birth sees in these arrangements is more than flexibility with regard to discussing Time, but an expressed means of reckoning time in the past—an understanding how people come to terms with their history.
Consequently, four cultural temporal models emerged as Birth investigated memories: dates, periods of publicly recognized historical significance, age or stage in the life of the cycle, and reference to “years ago” (2006: 7). Remembered events are not clustered together as a result of coincidence, but rather by the complicated and conscious work of relating self to other and self to history (Birth 2006: 7). Birth concludes “in Trinidad, temporal landmarks are based on events that involved significant changes in social relationships, and as a consequence of this, are events that remain intersubjectively significant” (19).
According to Clifford Geertz, there very well may be “certain sorts of patterns, and certain sorts of relationships among patterns recur from society to society for the simple reason that the orientational requirements they serve are generically human” (1973: 363). If this is indeed the case, then patterns aligned with those uncovered by Kevin Birth should be readily extracted from similar ethnographies. We will test this exercise with Richard Price’s The Convict and Colonel (1998). Price’s Convict is a reasonable choice because it is situated in the Caribbean and the site and people of study, the Martiniquans, share a colonial history similar to that of Trinidad. While we may not uncover the same exact structure regarding Time, we should be able to frame them in the same way: in terms of ways of reconciling the past and the corresponding cultural models that accomplish this goal.
The narrative of The Convict and the Colonel is one of corruption, power and a possible murder, and a martyr—all the expected essential components of a tale of colonialism, and a good story, for that matter. (I recommend reading it if you've got the time.) Price’s subject, Medard Aribot, accused of instigating a riot that killed Colonel de Coppens, a representative of colonial rule, has long been dead. The events that Price are concerned with happened well before his entry onto the Martiniquan scene. However, as he witnesses Martinique’s struggle with modernity, which includes the creation of a national hero in Aribot, he is forced to investigate memory to contextualize his experience. So he sets out to engage the recollections of the Martiniquans regarding the tumultuous colonial period during which Aribot operated.
A survey of the personal statements in Convict with regard to Aribot reveals a pattern similar as discussed by Kevin Birth. Of the four means of reckoning time in the past he identifies, two are echoed in Convict. The first being reference to a stage or age in one’s life: “Old man Mabial, I knew him too,” “I remember him from Anse Cafford when I was just a boy,” “I was just a kid when I saw that,” and “When they came to take him away, I was just a little schoolkid” (Price 1998: 62, 64, 69, 76). The second references the number of years separating the past from the present, and is similar to the Trinidadian phrase, “long time”: “My father had known him from way before” (Price 1998: 65). The cultural models that emerge in reckoning time are also similar to the ones uncovered by Birth. The statements reflect ages or stages, the sense of “long time” or “years ago,” and period of publicly recognized historical significance as is evidenced by the following: “That man was powerful, eh!” and “We’re not going to see a man like that again soon!” (Price 1998: 74, 76).
The parallels that emerge here may suggest that parallels between Intersubjective Times may exist in different geographic locations that share similar attributes. Both Trinidad and Martinique share a particular experience that shaped their respective societies, which in turn affects how people experience the present and recall the past. Places like New York City and Miami also share a history—but they also share residents and visitors; they actually share a present. So the Intersubjective experience is not just a memory. It is constantly experienced. Miami is part-time home and playground to many New Yorkers, and there is a nightlife from which some parallels may be drawn to the staples of NYC life. For example, on the popular and crowded Ocean Drive, restaurants and bars vie for patrons at night, serving alcohol, food, and music. And there are a few other late night eateries open that may resemble a deli—though I haven't yet determined whether they serve roast beef and salami at 3 am. Because of the cosmopolitan nature of places like New York City and Miami, a blending of Intersubjective Time occurs and must be contended with. The result is that Time is more of a tool—something that can be molded to suit a convenience rather than being a guiding principle—because there is no set standard of time that can be broadly applied. 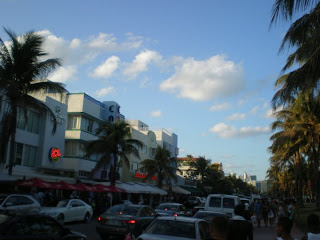 [Traffic on Ocean Drive in Miami. March 2010]
Places such as Port St. Lucie, Fl and Rockville Centre, NY have less traffic flowing in and out, and as a result the Intersubjective experience is consistent and can be adjusted to suit the needs and norms of the society. It's interesting to see whether there will be a shift in Port St. Lucie and other camp locations in the coming years with regard to "social" time during the Spring Training season. Individuals travel from all over the country to these locations for the annual springtime rite of baseball's rebirth. My instinct tells me that this is unlikely to happen because places like New York and Miami where the blending of Intersubjective temporal expectations is natural are really rare occurrences. Most places seem be closed systems in this sense. And in truth, Spring Training is not new to Port St. Lucie, so if the shift to accommodate other Intersubjective experiences has not happened yet, I doubt it will.
Thanks for making this journey through time with me. I welcome your thoughts on this matter—feel free to chime in below.
Works Referenced:
Birth, Kevin. (2006). Past Times: Temporal Structuring of History and Memory. Ethos, 34 (2)
Geertz, Clifford.
1973 The Interpretation of Cultures. New York: Basic Books.
Price, Richard.
1998 The Convict and the Colonel. Boston: Beacon Press.
© Krystal D'Costa