"I want this work to be perfect so the world will respect us."
- Zahi Hawass, Egyptologist and Secretary General of the Egyptian Supreme Council of Antiquities (Unwrapping King Tut)

I took a break from the Olympics to tune into the Discovery Channel special concerning the work Dr. Zahi Hawass and his team have been doing with Tutankhamun's mummy. 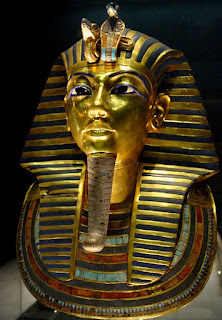 Researchers have determined that Tutankhamun's death was likely due to malaria and a degenerative bone disorder. Using DNA testing, hieroglyphs, and artifacts, Hawass and his team set out to fill in the missing chapters of the boy king's life. The documentary proved to be more a testament to Hawass' authority more than anything else, showing us how media can be mobilized to establish ownership and authenticity. [Right: Tutankhamun's funeral mask. Credit: Bjørn Christian Tørrissen.]
Throughout the program, Hawass demonstrates extraordinary care and thoroughness that surely even non-archaeologists can appreciate. His persona is pensive, analytical, and deeply immersed in the world of Egyptian antiquities. Though he's a rather controversial character, with every carefully crafted scene that made it past post-production, he demonstrates that Egypt is more than ready to take control of her antiquities and manage her past. The leading quotation for this post represents this sentiment beautifully. Hawass has commanded the attention of the international community, and he will not sit idly and let this opportunity pass.
Discovered in 1922, Tutankhamun's tomb was an amazing archaeological find. The pharaoh was surrounded by riches that revealed much about ancient Egypt, but little evidence has been found regarding his family. Hawass and his team painstakingly assess archaeological and genetic evidence to determine likely candidates for Tutankhamun's relatives from a a number of unidentified mummies.

Hawass is shown hustling through the desert to the old tombs, he pours over cartouches for clues about King Tut's family—he's a hands-on guy, still very much involved in the day-to-day of managing Egypt's cultural resources. He has to do it all because he previously rejected requests for DNA testing from other research groups. Why? Tutankhamun's mummy is fragile, having been broken and pieced together by the archaeologists who found him (as Hawass makes it a point to note). In Tut, as Hawass leans over him ever so reverently, the question of who is best suited to care for Egypt's history is most poignant. It wasn't Egypt that damaged Tutankhamun. Hawass, as the representative for Egyptian antiquities, makes it clear that he takes responsibility for the welfare and status of the mummies. [Left: The mummified feet of Tutankhamun. Credit: Ben Curtis/AP.]
Most of the first installment of the documentary dealt with establishing Hawass as an authority capable of managing cultural resources. It was a bit dry, and seemed a bit like a video job application. I nearly didn't tune in for the second installment, which was more of the same except that it featured two additional experts who enthusiastically supported Hawass' findings.

The documentary adds to the publicity surrounding Hawass and his work, and while the man can appear contentious, I do admire his single-minded resolve to reclaim his national heritage. He's on Twitter and Facebook, and he's utilizing all available channels to get his message out. What are your thoughts about how academics can utilize social media to make research more accessible to the public? By employing popular social media applications, Hawass has been able to tap into an entirely new "fan" base—he's speaking to any and all Egyptian enthusiasts and done away with the hierarchy that knowledge management sometimes imposes. [Right: The mummified face of Tutankhamun. Credit: Ben Curtis/AP.]

Not all academics have the ability (or budget) or need to utilize these methods of self-marketing, but it might be useful in connecting their research to a larger audience—and popularity could potentially translate into funding. Is there something to be learned from Hawass' methods? As for the documentary, it was interesting, but I wouldn't sit through it again. It will give you a nice overview of some of the challenges researchers encounter when working with DNA material from ancient sources, but it was clearly edited for a specific purpose.
© Krystal D'Costa