Looking for a Dial Tone? The Unglamorous Life of a Public Pay Phone

These days it seems that everyone has a cell phone. Most of us walk by public pay phones without a second glance in their direction. I definitely do—until Wednesday, when I stumbled upon a couple actually using a pay phone! Yes, they were likely tourists (I made that assumption based on their attire), but hey, it turns out that those ugly, dirty booths, kiosks, and stands actually do work. Well, sometimes.
Once prevalent throughout New York City and the rest of the country, the rise of cellular technology has meant the decline of the public pay phone. The first public pay phone was installed in 1889 in a bank in Hartford, Connecticut. Meant to provide a measure of convenience, by 1902 there were 81,000 pay phones throughout the country. 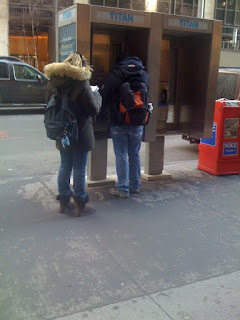 The outdoor phone booth made it's appearance in 1905, and by 1925 New York City boasted ownership of 25,000 phone booths. According to the NYC Department of Technology and Telecommunications, as of July 2009 there were 18,090 active public payphones available throughout New York City. Though unfortunately, the vast majority of those available don't work—you can count on a dial tone for only one in four of those in the subway, not that you would want to encounter the grime and germs that call them home. The fact is that the maintenance costs associated with these once popular service providers are no longer offset by the revenue they bring in from actual calls. According Verizon spokesman Jim Smith, "on average, a Verizon pay phone should handle at least 150 calls per month in order to cover its individual operating costs. Based on that 150-call minimum, a pay phone requiring 50 cents for a local call would need to earn $75 a month to financially justify its existence." [Right: A couple use a NYC public pay phone. Feb. 2010]
In all the time I've worked at this particular location, I have never seen a single person use the pay phones on the corner. I myself couldn't tell you the last time I placed a call from a public phone—any public phone. Are pay phones still necessary? Well, yes. In the aftermath of 9/11 and the 2003 blackout, hard wired phones were the only phones that worked. People stood in line to use them. Nonetheless, the public pay phone continues to be overlooked and possibly looked down upon. How does the public perceive an individual who needs to use a public phone? Is it a mark of lower status to not have a cell phone? Of course, there are still individuals who rely on public pay phones—individuals who don't own a cell phone (17.6% of the US population did not own a cell phone as of Nov. 07, which seems to be the most recent data available) and international visitors are the ones who are most likely to look for a public pay phone. Still, these groups don't use phones often enough to meet Mr. Smith's projections. Nonetheless, I doubt they will ever completely vanish. For one, it's estimated that public phones generate $62 million in advertising, of which the city gets about a third. Think about it—for the cost of a billboard in Times Square, an advertiser could cover the city with her message via phone booth and kiosks. But this doesn't mean that working phones are located where people most need them. Advertisers want their messages in highly visible, high traffic areas, which doesn't necessarily include some lower income neighborhoods. Is this another element in the technology divide?
What's the status of public pay phones where you live? Are they disappearing? When was the last time you used one? I know you're out there—post your comments below!
© Krystal D'Costa