Toward a Common Humanity

"Being an anthropologist means that when a natural disaster occurs somewhere in the world, a friend may be there."


I could not have expressed this sentiment any better myself, so I am borrowing the words of a member of my former UNC cohort. The recent catastrophic earthquake in Haiti has turned my thoughts to our global levels of connectivity. Anthropologists develop unique relationships with the world at large, both through ethnographic subjects who come to be friends, and even extended family, and through their colleagues who create links to other neighborhoods, cities, and regions. When natural disaster strikes, many people are forced to wonder whether and how people they know may be affected, and some are surprised at the answers. 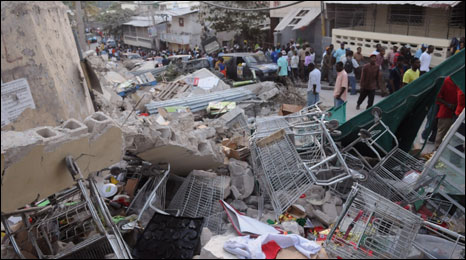 [Above: Earthquake destroys much of Haiti, Jan 2010. Photo from the BBC.]

With thousands feared dead and most of Haiti in physical ruin, international support has been widely pledged. President Obama has promised the "unwavering support" of the United States in a press release today, and while he has not committed to a specific monetary pledge, he has urged Americans to donate "despite the fact that we are all experiencing tough economic times here at home." Global financial challenges lurk ominously in the background, and I have to wonder how aid pledges will be affected by the economic crises that have swept the world. From what I've been able to dig up on the web, some of the offers of help are as follows:

The BBC also details additional international aid efforts in an article on their news site. Given the devastation that has wracked Haiti, will this be enough? President Obama has stressed that support to Haiti must be an international effort if it is to be an effective effort. If financial aid is not possible, then perhaps nations can offer services and much needed resources to assist. But still, will it be enough? For a country that has long been steeped in man-made woes, including poverty and poor political infrastructure, perhaps this is an opportunity to rebuild from the very core—but to do so will require more than a gift of of a few million dollars, pounds, or euros. It will require a conscious investment in the country, and more importantly, the people.

But perhaps these are thoughts for the long term when attention to immediate needs of those who are buried under rubble or sleeping in the space where their homes formerly stood is needed. President Obama has also invoked a sense of global community:


"(T)his is a time when we are reminded of the common humanity that we all share.  With just a few hundred miles of ocean between us and a long history that binds us together, Haitians are neighbors of the Americas and here at home.  So we have to be there for them in their hour of need." [From Press Release: Remarks by the President on Rescue Efforts in Haiti.]


Certainly, local Haitian communities both here in New York and elsewhere, have mobilized to send supplies and provide physical assistance in this time of need. For others interested in providing support, social media technologies have been helpful. For example, people have been text messaging donations. Social media has also played a larger role in disseminating information and keeping family members and friends connected and informed. CNN featured a page called What We Are Hearing Via Social Media, providing eye-witness information collected from Twitter. And as I poured over the various news sites, it seemed that many of the images shown were from non-news personnel. These technologies are becoming crucial to the survival of our ever-growing and geographically-expanding networks. Web 2.0 technologies have been activated to create impromptu support networks  and share what little information people may have heard. They are proving integral to the management of disasters. And perhaps creating a global community so that when natural disasters strike, anthropologists aren't the only ones wondering and worrying about the fate of friends. 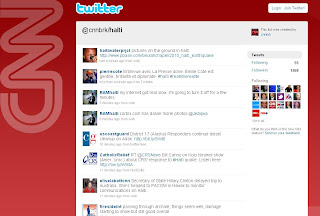 I'm interested in knowing if any of you donated money via text messaging, and if so how you learned about the opportunity. I'm also interested in learning about how you are following the news about Haiti—through social media, news websites, etc.

I hope that relief efforts are swift, so that Haitians can find some comfort before they begin the process of rebuilding.