Gucci, Coach, and Dooney & Bourke: The Experience of Being Socially Measured

I believe I was socially measured this morning, and I think I may have passed. During my morning commute, a woman sitting across from me caught my eye, gave me a sharp nod and said, "Nice bag." 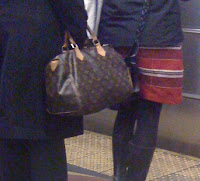 Momentarily shaken out of sleepiness (I hadn't had any coffee yet), I looked back at her blankly for a second. I flashed her a quick smile and nodded a thanks, and tried to return to my state of sleepiness for a few additional minutes. No such luck. My new friend leaned forward in her seat and scrutinized my bag. When she sat back, she gave a satisfied little nod and said, "I thought so. I was considering that one." All chance of reclaiming sleepiness gone, I found my eyes studying the shiny leather of her own bag—which she held on her lap like a shield—seeking the same information she had pursued moments before, wondering at her assessment and her sense of satisfaction. [Left: A Louis Vuitton hang bag in transit.]

Commercial brands have long been used by some to create, manage, and read social status. As an undergrad, I spent some time exploring reputation and respectability via Peter Wilson's work in the Caribbean (1969). Wilson proposed that reputation was a public phenomenon, based on showings of wealth and other physical items. Reputation was therefore something that could be determined at-a-glance. If you were poorly dressed, then you must also have a poor reputation. Reputation was based in part on your public presence. Respectability however was a much more qualitative assessment: it was based in part on accomplishments. As knowledge of accomplishments is limited to a much more local group, respectability was attributed to the private realm—the immediate network of your home and close community.  So for example, the type of car you drove would contribute to your public reputation, while earning a promotion might contribute to your respectability within your family and peer circles. For Trinidadians living under and with the legacy of colonial rule, reputation was harder to come by as economics often limited opportunities to purchase the items necessary to attain public standing and become socially mobile. Some individuals managed to bring the ideas of respectability into the public sphere to author themselves as reputable via the sport of cricket, thus changing the dynamics of reputation and respectability.

Now that you've had a healthy dose of anthropological theory to get your Friday morning started, let's go back to my fashion savvy friend on the subway. In an ideal world, opinions about others wouldn't be formed based on at-glance-observations concerning modes of dress and the designer labels we sport. 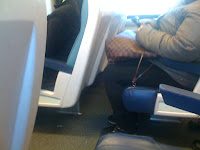 However, the truth is we do it all the time because it helps us organize our world. This form of public reputation—a personal brand, if you will—allows us to believe that we know something about the other person (for better or worse). I was evaluated this morning and met her standards. My bag apparently allowed her to place me in a certain category, and allowed her to relate to me—I was someone who would understand her assessments. My degree of respectability didn't matter, and really how could it? She couldn't know me or anything that I might have accomplished. Her evaluation was based purely on the way I presented myself. [Right: Another Louis Vuitton—recognizable by its signature print.]

In a recession-minded society, will labels continue to have the same value to reputations? Or will more weight come to be placed on respectability? And since respectability in this model is not based on the ownership of luxury items, how will we gauge it? Would a person reading a book on the subway be more respectable that a person with an iPod? And would the title and subject of the book matter? Would a person with a Kindle be more respectable than a person with an old fashioned book? As you can tell, I have some questions—and I'm interested in your take on this. Talk back below.