Sleepers, Squeezers, Lurkers, and More: Interacting With Subway Riders in Their Natural Habitat

In a city that values personal space, we sure spend a lot of time in close contact with one another, particularly on mass transit. I personally will only board a packed subway car if I am running late and have to get somewhere immediately, otherwise, I'm perfectly content to scope out the platform, note where the doors open, and wait for the next train (this behavior makes me a camper, as we will discuss shortly)—if I have learned anything traveling via mass transit, it's that there is always another train. 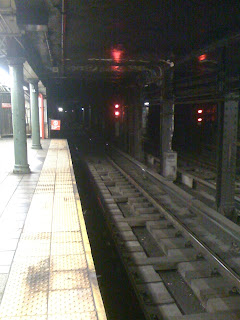 which meant that I—as well as hundreds of other people who normally take those lines—was forced to find alternate routes. Having resigned myself to missing my regular LIRR train, I opted to follow my rule of letting the crowd go before me. And as usual, it worked. (Or seemed to.) A train came, and everyone piled in—they would have ridden between the cars if the practice hadn't been outlawed. Just to be safe, I let another train roll through the station. It was moderately full, but boardable, but I was already off schedule at this point, so I figured I might as well wait for a more comfortable experience. Not too long after, surely enough, a quick peek down the tunnel revealed the dim glow of the headlights of an oncoming train.[Image Left: Looking for the train down the tunnel. The dim glow of headlights mean it won't be too much longer.]

The train arrived and it was virtually empty, so I boarded and stood by the door because I only needed to go three stops or so. Well, what I hadn't banked on was how crowded the trains must have been when they got to the stops after the station where I boarded. So if the trains had been merely crowded by my judgment at my station, they were virtually unboardable by the time they got to subsequent stations, which meant that people had no choice but to wait—until the train I was on arrived, and they flooded the car. I'm a petite person, so I quickly found myself pressed against the glass. Sideways. Under someone's armpit. Yeah. I had a pang of claustrophobia and had to remind myself that I would be getting off soon. I closed my eyes and breathed (though not too deeply) and tried to subtly adjust myself into a slightly more comfortable position. For those of you who don't live in an area where mass transit can get this chaotic, to help you fully appreciate this experience, I've included the following Seinfeld clip where Elaine Benes gets stuck on a train on her way to a wedding:

Despite leaving a facial imprint on the glass door, I could understand why the train was crowded—service interruptions and delays aren't fun for anyone. I doubt anyone on the trains that afternoon had an enjoyable ride. But what about when personal space is invaded when there is no reason for it?

Last week, while having dinner with my good friend James, we got to swapping commuter stories. We were talking about large backpacks, and prime spots on the train (he prefers to stand by the door instead of taking a seat—consequently, I have categorized him as a door dweller), 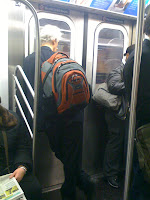 when the conversation turned to people who seem oblivious to others around them—the ones bump you with their backpacks, blast their iPods, occupy multiple seats, etc. On his way to meet me for dinner, James fell victim to a close-stander. Surely you've heard of close-talkers (which, interestingly, is another Seinfeld phenomenon)? Well, close-standers are oblivious to personal space boundaries. They will stand inches away, their hair in your face, knocking your book or personal device out of your hand, and they do this without any need for it, and without seeming to know they are doing it. Close-standers do this when there is more than ample space on the train to accommodate everyone. Perhaps they are used to traveling only during rush hour when close-standing is mandatory; perhaps the trains and buses they ride are always crowded; perhaps this is their way of getting human contact—no one really knows, but close-standers sometimes create uncomfortable situations for those around them. [Image Right: A door dweller stakes his claim. He could also be a packer, but his manuevering to remain in the door caused me to classify him as specified.]

Before we go on, it might bear discussing the different categories that subway riders can be grouped into. All sorts of characters ride the subway and, like any good cast, they know their parts well: 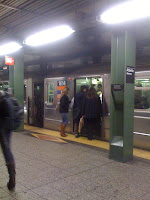 We could go on listing categories extensively, but I think we have the basics. Now that you have an understanding of the cast of characters, let's return to James' story. The train was relatively empty, and so he was able to claim the preferred domain of door dwellers. When the train pulled into a subsequent station, the doors on the opposite side of where he was standing opened and a woman boarded. She crossed the aisle to stand in front of James with her back to him. And slowly the space between them seemed to diminish. According to James, "she was all up in my business!" As the train rocked back and forth, she bumped him a few times. James didn't confront her, but he was perplexed—with all the space available, it seemed ridiculous that she would crowd him as she did.

So I proposed a few suggestions to James to explain the woman's behavior:
Riding the subway is a unique social experience. As mass transit, it is used by people of all cultures and backgrounds, and undoubtedly people have different notions of what are socially acceptable interactions. However, quite a few of the categories above can create uncomfortable situations as you find yourself in close bodily contact with strangers as a result of their actions. An alarming trend that has grown out of this is the rise of sexual harassment on the subways. In close quarters, people are groped, and according to the comments in response to the campaign, been ejaculated on and rubbed up against. One emptier trains, or when riding late at night, riders have reported men exposing themselves. It's clearly a jungle out there. The Holla Back blog provides a forum where people can share their subway harassment stories—be warned if you visit the site that some of the stories are quite explicit. The MTA launched an anti-harassment campaign, but it remains to be seen how effective it has been.

[Image Above: Anti-harassment ad on the subway.]

This particular type of unpleasant subway interaction aside, many of the offenses attributed to these categories seem to stem from a brand of social indifference. People don't care because their interactions with one another are largely minimized by the cushion they carry in the forms of iPods, PDAs, smart phones, and even books and magazines. But many of these categories simply represent commuting strategies. I am certain that campers and door dwellers have been around for some time. Packers may have emerged as a result of current economic times. But it is also true that the norms of social behavior are changing. Of course there are those who simply feel that others should accommodate them. I have observed this with packers and sprawlers and squeezers in particular. The nature of social interactions is changing as a result of new technology and media. It is yet unclear as to how the social order will evolve.

Have a category to add to the list above? Want to share a subway story? Join the discussion below!