While we tend to think of the history of New York City in terms of the English settlement, the truth is the city's foundation is decidedly Dutch. I say this without any disrespect to the original inhabitants of the land that so enraptured the early Europeans, but it's true. And it is the Dutch I wish to speak of today. Believe it or not, much of the New Amsterdam colony has remained—names of places in and around

the city, as well as throughout much of the New England region, remind us of our Dutch heritage: Stuyvesant, the Bouwerie, Greenwyck (Greenwich Village), Breuckelen (Brooklyn), Parelstraat (Pearl Street), Fresh Kills, Gravesende, Van Cortland, Nieuw Haarlem (Harlem), Vlissing (Flushing), Lange Eyelandt, as well as Roode Eyelandt and many more, attest to a Dutch presence in our history. And the truth is that had we solely been an English colony, the flavor of New York City would be immensely different today. While the English Puritans were establishing mono-cultures to the north in Boston and the surrounding areas and to the south in Virginia, New Amsterdam was already a bustling model of diversity. As a port settlement, its main concern was business (which remains true today), so people of many different backgrounds, religions, and races—and characters—settled here from its earliest inception. [Image Right: The Jansson-Visscher 1656 Map, Dutch North American colonies; reprinted 1685. Public domain.]
As a port New Amsterdam was as boisterous as New York City is today, and it wasn't long before the Dutch West India Company's Director-Generals felt they needed to instill law and order. Peter Minuit attempted to do this with a Thursday counsel in the rudely constructed Fort Amsterdam. Subsequent Director-Generals, including William Kieft and Petrus Stuyvesant, conducted government business out of the Fort as well, which also provided a base for trade for the Dutch West India Company. It was definitely an important site in the development of the colony—providing a sense of protection and serving as a point of contact with the mother land. Image Above: Map of New Amsterdam, c. 1660. Fort Amsterdam is the quadrangular structure at the tip of the island. Note the shoreline. Source: New York Historical Society. Public Domain.

The colony was growing in leaps and bounds, and perhaps understanding early that to effectively run a colony with such a diverse population you needed to be in touch with its residents, Director-General William Kieft had a stone tavern constructed on the corner of Coenties Slip and Pearl Street in approximately 1642. At this time, taverns did more than just serve your favorite brew: They were meeting places, inns, and the den of politicians. (Although, in truth, Kieft may have commissioned the building partly because he needed a place to send the guests he was forced to entertain in the Fort.) So it was that the Stadt Herbert became the first City Hall of sorts in New York City—though it would not be officially commissioned as such until 1653 under Stuyvesant. At that time, its name was also officially changed to Stadt Huys (literally, State House) or less formally, City Tavern. In 1653, when the signing of the municipal charter officially named the settlement as a city, the town officials stated as their first piece of business that

"herewith [to] inform everybody that they shall hold their regular meetings in the house hitherto called the City Tavern, henceforth the City Hall, on Monday mornings from 9 o'clock, to hear there all questions of difference between litigants and decide them the best they can" (Shorto 2005: 257).

And so, without much pomp, the first City Hall was installed on the island of Manhattan, just feet away from the water's edge in what would become the downtown area. However, long before it's official establishment as City Hall, it was a meeting place for organizers and activists, such as the Board of Nine, which included Adriaen van der Donck, who quite possibly conceived the term "American" and was perhaps the early colony's most enthusiastic supporter. [Image Right: City Tavern on the East River water front, c. 1655.] 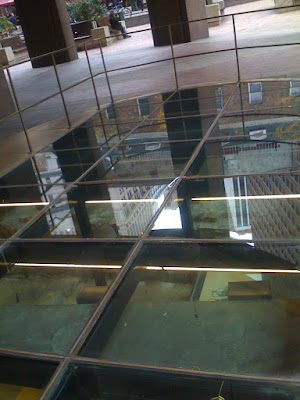 Of course, even in its early days, New York City was a place where progress was often cited as a reason for development. Stadt Huys served as City Hall until 1697, when Lovelace Tavern, which stood next door, assumed the honor. Lovelace Tavern was constructed in 1670 by New York's second English governor, Francis Lovelace. The English had seized the colony in 1664 and perhaps the movement to this site was in part to eradicate the Dutch hold on the colony in the minds of the residents, who were permitted to stay and hold on to their possessions after the transfer of power. The colony itself had also at this point been renamed for the Duke of York (only history would ever know it as New Amsterdam again). It also underwent a transformation—when the Dutch temporarily reclaimed the city (which they then named New Orange), it had begun to resemble London faintly. In any case, Lovelace Tavern served as a temporary home for City Hall. It apparently burned down in 1706, and City Hall was then moved to the site of Federal Hall on Wall Street. (City Hall would come to reside at its present location in 1811—and it is the oldest building in the United States to have been used continuously as a city hall. FYI, the Bowery Boys have an amazing photo up of City Hall from 1855. Check it out!) Though all physical traces of the original City Tavern have been lost, when construction for the building at 85 Broad Street commenced, the foundation for the neighboring Lovelace Tavern was uncovered in New York's first archaeological excavation. The foundation was ultimately incorporated into a permanent display at 85 Broad in an effort to preserve the city's history. 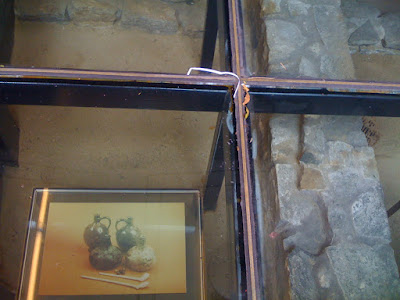 [Image Left Top: Archaeological display at 85 Broad in Lower Manhattan. Image Above: Stone foundation of Lovelace Tavern, c. 1670]
In excavating the site, additional glimpses into life in the early days of the colony have been revealed. An early 18th-century well was uncovered that is said to have resided on land belonging to longtime residents, the Philipse family, of the Philipse Manor. The well extended down to the waterline, reminding us that the East River's waterfront once ran along what is now Pearl Street, and that a fair portion of downtown Manhattan was actually physically constructed as the colony grew. It provided water to the entire block, and when the waterline was pushed back and it was no longer used, it was filled with everyday items—it became a trash receptacle. That the cistern had been installed at this site by the early to mid-1700s tells us that the neighborhood was evolving. Buildings were being torn down and new ones erected, or re-purposed. We're placed in a moment of great change in the history of New York City. 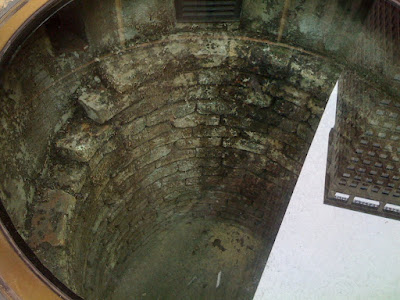 [Image Above: 18th-century cistern in lower Manhattan.]
While New York City continues to evolve, its past echoes faintly in the Dutch-revival buildings downtown—none are original: the original architecture vanished in the fires of 1776 and 1835. The Dutch have left a legacy in the places that bear their names. And they have left a legacy in diversity, which they tolerated since it helped business. Of course, tolerance should not be confused for equality; they did not accord everyone the same rights in the colony, though everyone had some rights. The legal records that have survived provide evidence that slaves filed suits against Europeans regularly; that some slaves were freed by their owners; and that Europeans were sometimes employed by freed slaves. In this rambunctious port city, Africans were some of the most stable residents of the island. Intermarriage between persons of different nationalities and religions also occurred here with greater frequency than other colonies. Thus, it seems that while the landscape has evolved through the ages, the character of the city, that brisk business settlement where tolerance can be expected, remains.
I encourage you all to go out and learn a bit of the early European settlers in your neck of the woods—you might be surprised by their resolve. And for an amazing depiction of the colony of New Amsterdam, Russell Shorto's Island at the Center of the World is strongly recommended.
Here are some additional scenes of the old colony: 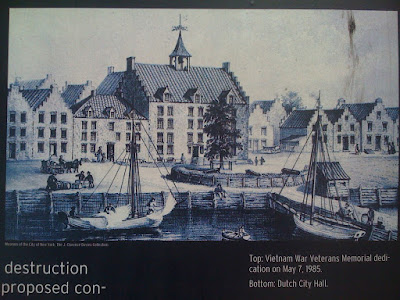 Image Above: Coenties Slip and Pearl Street, c. 1665. The site of the City Tavern, New York's first City Hall. Note the shoreline of the East River. The City Tavern was also less than a two minute walk from Fort Amsterdam, putting it within easy reach of the Director-Generals—and their guests. 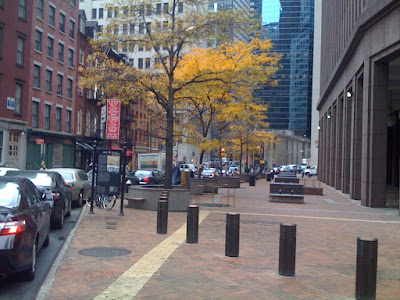 Image Above: The corner of Coenties Slip and Pearl Street, Nov. 2009. No trace of City Tavern remains. However, the yellow bricks in the foreground represent the foundation of City Tavern, which was reconstructed using old maps. The gray paving stones in the background mark the foundation of the Lovelace Tavern. To the left, businesses now line Pearl Street where the East River once met settlers hunting for oysters and looking for Dutch ships. 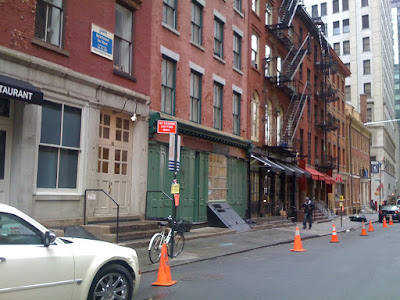 Image Above: Pearl Street, across from 85 Broad, Nov. 2009. Businesses along where the East River waterline once existed.
Cited:
Shorto, Russell. The Island at the Center of the World. New York: Vintage Books, 2005.
© Krystal D'Costa