Fido Speaks: In the Grip of the Anthropomorphized Pet

When you were a kid, did you have or want a pet? What about now?

I have a fairly full pet history. I am a sometimes reluctant co-owner/parent of two cats, one regal and sedate, Blink, and the other playful and slightly odd, Blaise—I adore them but it's hard to be enthusiastic when you come home to cat vomit because the younger one decided to eat all the dry food you left out to exert her dominance. I'm also an aunt of sorts to a cocker spaniel (he belongs to my brother-in-law); 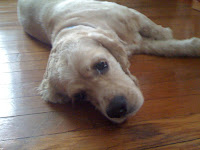 since I am responsible for his name, Frodo, I figure that grants me some degree of parentage, though as a cat person I tend to find him smelly and clumsy. (In hindsight, I would have suggested Maximus or Lucky if I'd known anyone would take me seriously. Really, I was just thinking aloud. And I secretly call him Maximus anyway, which is probably why he's confused.) And as a child, I've also had a pair of rabbits (my parents gave them away), the requisite childhood goldfish (I nearly overfed them), a stray dog I named Kit (yes, after the talking car in Knight Rider), and assorted parakeets thrown into the mix (in truth, these have always been more my father's pets than mine). No rocks, though. [Image Right: Frodo, the fearless cocker spaniel.]

If you have a similar list, we're not alone. According to the ASPCA, 60% of all households in the U.S. have at least one pet. The Humane Society reports that in 2008, there were approximately 75 million dogs as pets, and 88 million cats as pets (including my own two terrors).There's no question that pets occupy a special place in our lives—they have clothing lines, their own products, they even have a care industry (e.g., pet sitters, doggy day care, walkers, doggy valium, etc). The Internet is littered with videos of pets doing funny things, like the kittens who thought they would hitch a ride on a Roomba.

Humans have been keeping pets for as long as they have been able to support them. The earliest pets—dogs and cats, descendants of wolves and large wild cats—were probably domesticated for work (protection, hunting, etc) and grew into partnerships with their owners over time so that their descendents enjoyed greater status within the household. An article in November's National Geographic describes the honor awarded to royal egyptian pets: they were often interred with their owners, along with mummified food and playthings.  I had the good fortune of seeing the Hapi-men mummy last summer at the University of Pennsylvania Museum of Archaeology and Anthropology (see image below). He was buried with a mummified terrier—dogs may want to reconsider the whole idea of "man's best friend" and what that entails. But it seems that Egyptians kept a variety of pets, from assorted birds to crocodiles to lizards. 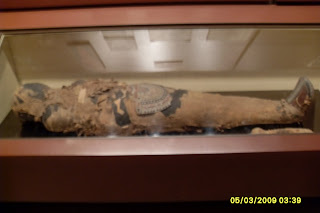 Animal mummies were once cast aside, children sold nice specimens to tourists but the bulk of these findings were turned into fertilizer—until anthropologists and archaeologists realized that a lot could be learned about life in ancient Egyptian times from these mummies. For example, they can reveal which animals were sacred, such as the bull and the crocodile. They can tell us about votive offerings, and they can tell us about the mummy industry itself, which was in full swing by 664 B.C. As is common with any popular commercial trade, it was soon infiltrated by less than savory characters:


(C)orruption crept into the assembly line, and the occasional pilgrim ended up with something dodgy ... x-rays have revealed a variety of ancient consumer rip-offs: a cheaper animal substituted for a rarer, more expensive one; bones or feathers in place of a whole animal; beautiful wrappings around nothing but mud.


But perhaps there is something to be learned from our current relationships with our furry, finned, and feathered friends as well. What becomes clear in reading

about mummified animals is that they were cast with anthropomorphic properties—that is, they were accorded human characteristics. We can say this because we know that cults grew around certain animals, and they were believed to be connected or representative of certain gods. For example, crocodiles were associated with Sobek, a water god of fertility; falcons were connected to Horus, a sky god and protector of the living king; and dogs were linked to the jackal-headed Anubis, guardian of the dead. The Apis Bull was revered as a representation of the all powerful king. Apis bulls were treated to special sanctuaries and elaborate funeral rites. [Image Right: Animal mummy.] 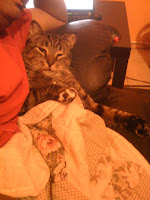 We don't quite worship our pets in this way, but we definitely do think of them in anthropomorphic terms. Blink likes to cuddle under the blanket. Is she emulating her owners who pull the covers up to their chins when they're ready for a nap? Blaise likes to settle near my books. Is she reading them when I go to bed? And on more than one occasion, they've parked themselves in front of the television. Are they watching and understanding the way we do? [Image Left: Blink under the blanket.]

Anthropomorphism is perhaps deeply rooted in our social nature. When we began to domesticate animals, the easiest way for us to understand them would have been to contextualize them in terms of what we knew best—ourselves. Attributing human characteristics to our pets links us to them: they are firmly in our control, but we are equally in their power. Because they have human elements to them, we are obligated to care for them.  Anthropomorphism has been explained as early attempts to understand the world, to link the divine with the natural, but perhaps there is a simple need for companionship in the equation as well. In a world still full of mysteries, is it any wonder that we tried to root ourselves firmly in that world by tying it to ourselves in this way? 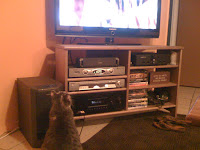 mirror their humans in other ways and they must need things, providing opportunities for padded profit margins. As Egyptian priests would sell votive mummies at higher prices to parishioners who looked like they could pay more, so too are unnecessary products peddled with earnest. And we believe we need to provide jewel studded collars and elaborate pet homes and carriers because we have to fulfill our obligations to our pets. In humanizing our pets, we have become captives to a certain degree. [Image Right: Blaise watches television.]

It is clear from both a historical and modern perspective that our pets are here to stay. The question is how far will we go to integrate them into our lives? Pet cemetaries are already fairly commonplace. Are these interments any different from pet mummies? Some pets can go to school to learn to be more petlike, a quality that we define and manage. The drive to humanize seems to march onward, but toward what end?