Whether you care or not, if you live in the United States, you undoubtedly know by now that the New York Yankees won their 27th World Series title. As part of the winning tradition, the players and relevant staff were honored with a ticker tape parade on Friday, Nov. 6th, down the Canyon of Heroes (also known as Broadway when it isn't packed with screaming sports fans). The parade wound its way down to City Hall, where recently re-elected Mayor Bloomberg presented the team with the keys to the city.
Parades are held to mark a celebration. They're a form of public festival that draws in the community, and actually work to reestablish social ties: The idea is that we are all gathered to celebrate the same accomplishment—we are united in our celebration. Parade-goers are linked by their sense of pride and camaraderie. 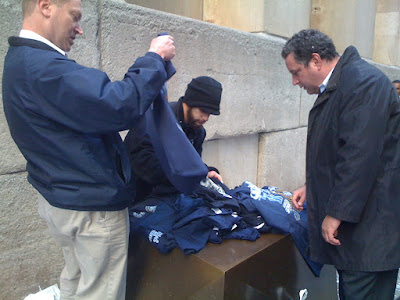 In a larger sense, parades are also a spectacle. It's a chance for a community to put on a show for their neighbors, to demonstrate their dominance. The accomplishment being celebrated connects the people present, but it also distinguishes them from others as well. And there is a great deal of preparation that goes into the show—from transit to safety to entrepreneurship to turning a blind eye when employees go missing for a few hours, everyone has a part to play. The spectacle is supported by the government because it provides a momentum that can be used. If buildings need to be built, laws need to be passed, or even wars need to be started, the momentum from such public celebrations can be mobilized. This sense of pride can carry forth many political agendas. [Image Left: A vendor sets up an impromtu stall on Nassau Street using a permanent sidewalk ornament.]
Ethnographers should always try to understand their biases, and their audiences should also have a sense of how the objectivity of information may be compromised. So before I go on, I need to confess that I considered calling this post "Infiltrating Enemy Territory." I am not a Yankees fan, as some of you may have surmised. I root for that other New York team, whose name I will not mention in a post about a parade for their rivals. I put a lot of though into whether this parade should be filed under the Culture in Action series, and ultimately decided that parades have a huge cultural element to them: they can reveal a great deal about the character and personality of a people through the ways in which society responds to these occasions. Regardless of the cause, a parade is still a chance to think about and talk about crowd dynamics. So as a dedicated anthropologist (who works within the vicinity of the parade route), I elbowed my way into enemy camp on Friday morning, bore witness to the scene, and extricated myself when chants of "Boston Sucks!" began to rise in pitch and intensity (belatedly realizing that I was wearing a red jacket—the color associated with the Yankees' arch rivals, the Boston Red Sox, and the team they beat for the championship, the Philadephia Phillies). 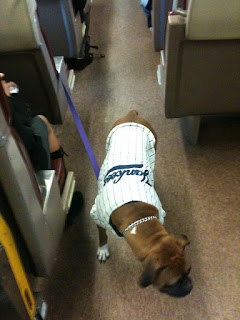 A coworker taking the PATH trainThe day began early for many fans. A great many people called in late or played hooky entirely, and teachers may have noticed a few empty desks on Friday morning. My morning commute was slightly more hectic than usual, as I contended with the large number of fans boarding the LIRR and subway. (which operates in a system similar to the LIRR) shared his morning commute with a dog who alternated between wandering the aisle and hopping up on the seat much to the annoyance of the conductor. Food vendors selling breakfast staples were doing brisk business as I made my way to my office building, weaving between the droves of people trying to get to Broadway.The came from all directions, of different sizes, shapes, and colors, all sporting the navy blue of their team. And there to greet them were the opportunistic street vendors who saw an chance to make a quick and relatively easy profit: banners and hats were $5.00, t-shirts cost $10.00. [Image Right: A dog ready for the Yankees' celebration downtown. Credit: J. DiBenedetto]
At about a quarter to eleven, I slipped into my jacket, grabbed my camera and hurried west on Wall Street. Several small groups—families with young children in tow—passed me, emitting triumphant whoops of joy. We all soon encountered a road block that could have ended all parade activities right then: Wall Street was closed at William Street, a good two blocks from Broadway. The police were blocking off street perpendicular to Broadway as they filled with people, and given the high profile of Wall Street itself, extra precautions were being taken to preserve the landmark. A cop advised us to walk north, so we walked a block to Pine Street, passing some more vendors, and turned west again to pack together as closely as we could to get a glimpse of the parade route. I ultimately wound up approximately half a block away from Broadway and still could only just see the events ahead of me. People got creative in searching for a good spot. Some climbed on the shoulders and backs of accommodating friends, boyfriends, and parents. Others climbed on top of city vehicles, though they were quickly chased off by watchful police. Some scaled buildings. Many buildings downtown have ledges about eight feet or so above the ground. They aren't wide, but if you're nimble, you can perch there to get above the crowd. And still others hung out of office windows. 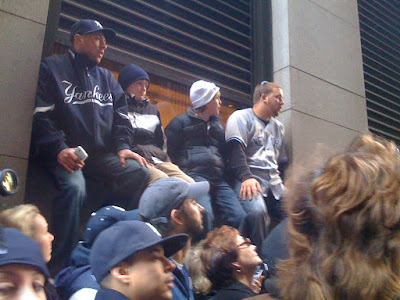 [Above: Fans find a good vantage point.]
The crowd seemed to feed off of the growing energy. Laughter would erupt, and in true Yankees fan form, chants of "Boston Sucks!" and "Phillies Suck!" and "Let's Go Yankees!" and "Twen-ty Sev-en"—the hyphens emphasize the musical intonation of that particular chant—would swell periodically. It was definitely something to feel: a sea of people packed into side streets in shoulder to shoulder formation, speaking as one and thinking as one (except for the impostor in the red jacket). We were momentarily transported back to the stadium. The chants were something that everyone could participate in, including those who had not made it to a side street before the police began barricading those as well. But in truth, even those at the very end of the blocks and the people behind the barricades didn't seem upset that they couldn't see their beloved team. They were content to stand there, to be a part of the crowd, and take up their favorite war cries. 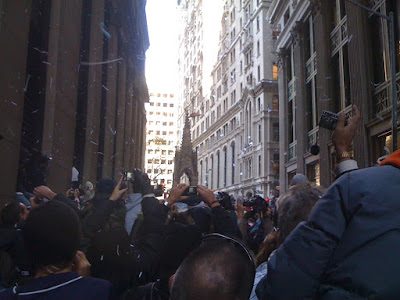 [Above: Crowd packed into Pine Street awaiting the parade.] 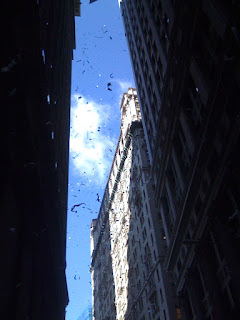 "Ticker tape" (really just shredded paper), thrown from buildings, drifted through the clear blue sky. In no time at all, the ground was covered, and everyone standing in the vicinity had scraps of paper in their hair and on their jackets. Ticker tape parades are unique to urban settings. They originated (where else?) in New York City. The first parade of this kind occured in 1886, when ticker tape was thrown during the dedication of the Statue of Liberty. The tape came from the old stock ticker machines, and when they were replaced by their electronic cousins, the ticker tape that filled the sky for these parades came from shredded office waste paper and city-supplied confetti. Caught in the wind, the scraps drifted for miles, blanketing Wall Street and the neighborhood. Lumbering street sweeping vehicles were on standby to get things back to order once the ceremonies wrapped up. [Image Left: "ticker tape" fills the sky.]
So there I was, in my red jacket, standing amongst a throng of people who probably would have fed me to the lions in the Colosseum had they known of my true loyalties. 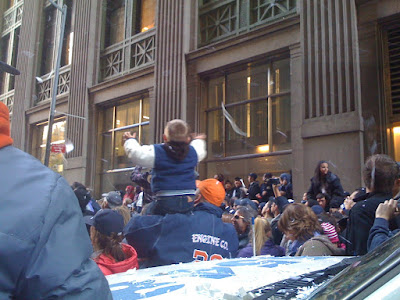 A cheer began to grow from the right along Broadway, cameras were thrust into the air around me, and the band marched by. Not to be dissuaded, the crowd continued to roar, their cries growing louder as the official photographers made their way down the Canyon. And then finally, They came. The moment these people had been waiting for arrived, and the crowd erupted, extending to the peripheries. In fact, those were the folks who probably yelled the loudest. Children were hoisted into the air. Hats were waved. A woman began to cry. [Image Right: Exuberant young fan tries to catch ticker tape. He did wind up snagging several large white sheets of copy paper.]
Remember when I said that athletes 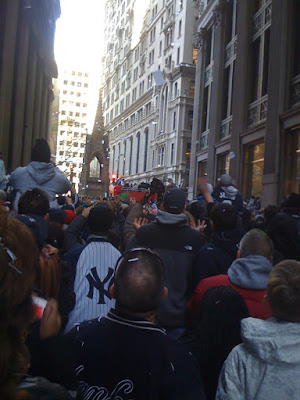 are our representatives on a public stage? We support teams because we believe in them—we trust them to protect our interests on the national stage. Well, the parade-goers turned out to say "Thank you." That was the feeling that seemed to radiate through the crowd. Yes, there was a bit of arrogance, but a certain amount of swagger is to be expected from the victorious—particularly when it is cultivated, and believe me, New Yorkers cultivate their swagger. People were there to say thank you. The spectacle was in the showing. The turnout was meant to send a clear message to rivals, and perhaps the strength of voices behind the cheers and the chants were meant to carry—I wonder if the hair on the backs of the necks of Bostonians and Philadelphians stood on end at that moment. Could the energy from this group have been so great as to travel that distance? [Image Left: The team passes this section of the crowd.]
Once the team passed, people began to trickle away from Broadway. 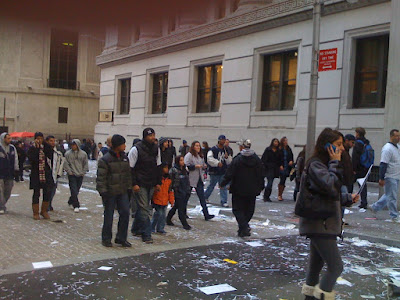 Some were going back to their offices, like me, and others were headed to City Hall for the final celebration, and still others were packing into bars and joining lines to buy hot dogs and chicken with rice from food vendors. The mood was jubilant. Vendors were still hawking their wares as I made my way back toward Wall Street, fighting the crowd heading in the direction of City Hall. But the day was not over for many. Those who did not have tickets to the City Hall ceremony seemed content to mill about and drink in the remaining atmosphere. [Image Right: People moving toward City Hall.]
The effects of this public festival/spectacle will last well beyond the coming baseball season. The city's spirit has been renewed by this gathering of fans—even though they don't represent the complete spectrum of baseball supporters in New York. The festival/spectacle has permitted the assertion of a sense of social dominance and it will be something that all residents—whether you support this team or not—will carry forth with them in their travels. Our reputation, whether we want to share in it or not, has been bolstered. Once again, we are a city united, albeit some more reluctantly than others. The parade created a substantial expense for the city, which probably saw a tab in the range of $330,000.00, but the long term effects appear to outweigh these costs. 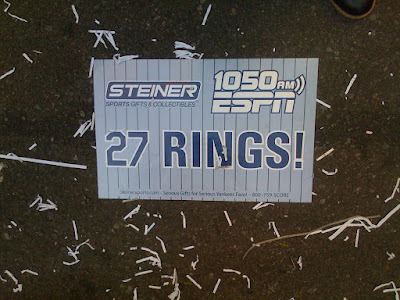 [Above: Debris post-parade.]
Have you witnessed a parade or village festival on a smaller scale? Perhaps in your town or village? What was the atmosphere like? Let's talk about it below while we wait for Spring Training 2010.
© Krystal D'Costa