On My Shelf: Ancestor 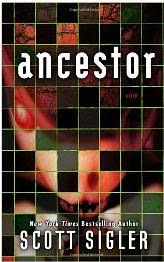 Remember Jurassic Park? You'd think that particular disaster would have been a lesson about the dangers of blind science. Apparently, it wasn't. In Scott Sigler's most recent writing endeavor, mad scientists are at work once again seventeen years later. And while their intentions are (basically) good, as is usual in this type of plot, they have been blindsided by greed and the glory of science, and their efforts unleash hungry horrors with the potential to breed.
Sigler's Ancestor found its way into my bag in June via the Read-It-Forward program. It worked its way down to the bottom and made itself comfortable—and thankfully, it was still there when the fire at an LIRR switching station added about an hour to my commute time—giving me ample opportunity to catch up on my reading. The initial experience with Ancestor was disconcerting because Sigler doesn't waste any time developing his characters—they are fully formed and in the midst of action when the reader meets them, so it's as though you've walked into a play in progress. Once immersed in the story, however, (which in this case takes about a quarter of the book), it's an entertaining, quick read, where you cheer for the bad guy's demise—and hope that it's as painful as it can be.
Ancestor places you in the shoes of scientist PJ Colding, project lead on a super secret endeavor known as Genada that could possibly change the face of medicine and health care: his team is creating technology that would ensure greater successes for transplant patients. They have reverse engineered the genomes of thousands of animals, and believe that they may have isolated crucial "ancestor" genes that would permit our bodies to accept transplanted organs—provided the organs are harvested from genetically engineered creatures developed specifically for this purpose. This works because the creatures are evolutionary echoes of the first mammals, so they're tied to all of us.
The project is funded by billionaire biotech leader Dante and his militant brother Magnus who have built a lab on Baffin Island. Readers meet the team at the height of frustration: they're close to closing the genetic code and producing a viable ancestor organism, but they're eluded by a single element that causes the host mothers—cows, in case you were wondering—to reject the pregnancies. On a mandated break, geneticist Liu Jian Dan cracks the puzzle and makes a unique tweak to the code allowing the embryos to implant and survive to maturity.
Success! But not everyone is celebrating. Colonel Paul Fisher does not approve of the technologies or methodologies employed by the research group, and nearly shut down Genada once before. A disgruntled team member brings him close to destroying the project again. But Magnus is prepared—he has a portable lab on a custom C-5 and a safe house on a frozen, remote island at the ready for exactly these types of contingencies. After all, above all else, the project must survive.
So before Colonel Fisher can swoop in and destroy the Baffin facility and the project, Colding and his group—minus the Judas—are whisked away. However, it becomes clear that something is wrong. The fetuses are growing at an alarming rate, and there are concerns about how the, um, babies, will be contained. A botched attempt to flee Colonel Fisher again results in the release of the pregnant cows on the island. They give birth. The offspring is toothy. And clever. And hungry.
Do I really need to tell you how badly this turns out?
The novel is definitely more about the adventures—and deaths—of the team members. There is enough science to satisfy the cursory questions of a lay person and stretch the imagination, but don't expect a real discussion on genetics. Science becomes an amorphous menacing entity that it seems few can control. Lurking beneath is the process of science itself, but this aspect of the discipline only makes a cameo appearance. The frustrated scientists were definitely more interesting overall because their passion, investment, and brilliance shone. In these early scenes, the reader sees that science is work. There's no Easy button at the ready. However, science fiction fans will enjoy the creature that emerges, I think. It is certainly a weird mix of imagination and terror.
This book is a good travel item. It's something readers can polish off on the plane or a long train ride, or while sitting poolside without too much effort. The chapters and the action move quickly and the ending, while a bit expected, is satisfying in its own way. It's not destined to be a favorite on my shelf, though. While it has potential, there's just not enough new here for it to warrant that status.
© Krystal D'Costa