Hail Marys on the Subway

There is probably little that can happen on the NYC subway that would surprise commuters. My friend Wendy once saw Spiderman (his spidey-web thing must have not been working properly). What did she do? She took a picture, of course. As further proof of the unflappable nature of subway riders, let's take a look at this video [Update: For some reason the video does not appear in the on-the-site preview. Please click "Read more" to view the video. Apologies.]:
(I'm a big fan of Improv Everywhere—their Ghostbusters mission is a favorite of mine. This video was posted on Twitter by @fivedirections.)
Still, being able to affect an air of indifference or hilarity doesn't mean that subway riders don't notice unusual things. They just make—split second—decisions about how and if they should respond. And there isn't much they will respond to. For example, a few weeks ago I shared my morning ride on the 2/3 train with a man reciting the rosary. Now, it's definitely not unusual to see a few commuters carrying their religious texts with them in the morning. I have seen many well-worn and marked pocket copies of the Bible and the Torah. But this was the first instance of conspicuous prayer that I have seen on mass transit. I don't want to turn this into a discussion on free speech. I'm not debating the right of anyone to read the Bible or say the rosary to themselves in public. The issue I want to explore is this: while saying the rosary seemed like a rather private act, because we were in such a public setting the rest of the riders in the car seemed to become participants as well. Did we have a role as witnesses? And can we hypothesize as to other purposes for public prayer?
The politics concerning public spaces fascinates me. Many large buildings in New York City have public spaces, but are they really public? Who governs these spaces? And the same question can be asked of parks, sidewalks, and even mass transit. In all these instances, it is not the public that maintains these spaces—when was the last time you swept, landscaped, or policed a public area? I'm not berating you or calling you to action here, but I want to make it plain that someone does provide the maintenance for these spaces, and the public may use them provided members of the public act within the confines of acceptable behavior.
But what constitutes acceptable behavior? I've written before about behavior that seems out-of-place in social settings, but who sets these standards? In part, they're decided by the social order with preference given to those behaviors that allow for the majority to be comfortable. For example, this is the case with the LIRR riders who enforce a limited use on cellphones. There is a cultural dialogue that occurs between members in a certain setting. In this instance, there is recognition of acceptable behavior within a specific context, and the appropriate response. It is this dialogue that I want to explore here, and to do so, we're taking a trip to South Africa, circa the 1970s.
Let's board a commuter train with anthropologist J.P. Kiernan (1977), where something interesting has happened: there are regular Zionist religious meetings in one of the cars. To understand how these meetings came about, Kiernan positions us at the height of the migratory movement in South Africa. Residents of Black townships were regular commuters on the rail system that linked Black towns and white urban centers, as was the case of KwaMashu and white-dominated Durban. Though the train was a mainstay of life, it was a reminder to KwaMashu residents of their political and economic dependence (Kiernan 1977: 215):
The same may generally be said of today's modern commuter rails, though these challenges are now rather muted. However, for the KwaMashu familiarity eased apprehension—and necessity dictated that the train was a part of daily life. And when one considers all the factors, travel by train was and remains relatively safe.  So people from KwaMashu boarded the trains and went to work in Durban, but they were mindful. They called the train ufufunyane, which translated to mean a style of demonic possession (Kiernan 1977: 216). And disasters loomed in their memories. Kiernan references Effington, and proposes that Zionist religious services were a means for commuters to contend with the danger inherent with their travels:


Prayer meetings first emerged on the train immediately following the Effingham disaster. The conclusion that they arose as a direct response to public uneasiness regarding the continuing safety of traveling on the KwaMashu line, at a time when public confidence in the railways was at its lowest ebb, is all but inescapable. Within a very short space of time the meetings were suppressed by the railway authorities who invoked the Riotous Assemblies Act in order to do so, an Act which forbids the holding of formal meetings (with the exception of normal religious services) in a public place (1977: 219).

South African commuters did not forget Effingham, however. And other incidences have followed:
Kiernan points out that this type of religious leadership was not typical behavior for Zionists, who usually shied away from public scrutiny. In essence, Zionist commuters were thrust into the role of religious leaders as other workers sought a means of controlling the commuting experience:

How is a man to control the public space in which he moves and acts? One way is to make alliances with others who use it and to incapsulate one's individuality within the protective circle of pals and friends (Kiernan 1977: 221).

Kiernan reasons that on a commuter train, Zionists could not readily remove themselves from public contact. On the crowded, swaying commuter trains between KwaMashu and Durban, everyone was exposed to the ill intentions of others and cruel chances of fate. In this setting, the Zionist reputation for carrying special charms and using strengthening medicines (umuthi) to ensure that in the event of an accident one will not be singled out for injury or death becomes an important factor. It identified the Zionist as a person of power, and in a setting where the individual was more vulnerable alone, other commuters looked to Zionists for protection via spiritual practice (1977: 217, 224 - 225). 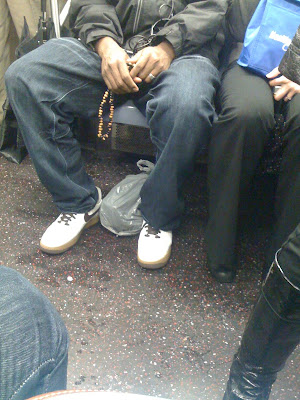 We can now leave South Africa behind and return to present day, where the issue at hand is not a prayer meeting but a singular instance of conspicuous prayer. Like South Africans of the 1970s, today's commuters board trains and buses daily because they cannot afford to let their fears control their mobility. For example, in the recent aftermath of the attempted Times Square bombing, riders could still be found in the subway despite fears that the New York City subway system is a terrorist target. Yes, they are aware of perceived dangers—as one PA announcement makes clear, "A crowded subway is no excuse for an inappropriate touch" and another reminds, "If you see something, say something"—but that does not stop riders from journeying to work and other recreational activities via mass transit. [Right: Saying the rosary on a rainy morning.]
I can't speak to the mental state of the rosary-sayer, any more than I can comment on the mental states of those who read from their religious texts in the morning, underlining sections and mouthing passages. These acts are different from the preachers who occasionally board trains and announce that we must all take Jesus into our hearts because He Is Coming. The former are private, personal, while the latter is something of a spectacle. And while other riders are witnesses to both types of behavior, in one instance they are quietly included as a result of their presence, and in the other, their attention is demanded.
Removing the traveling preachers, something similar to Kiernan's South African commuting experience may be at work here with public prayer. Traveling can induce anxiety and is riddled with uncertainties; there is, after all, no guarantee that you will reach your destination. There are accidents on the LIRR and the subway, and the threat of a larger public menace looms in the spirit of terrorism. Perhaps these religious readings serve to alleviate some of the uncertainty of travel. And perhaps because they are not forced those who witness them simply because of a shared circumstance, they offer some degree of solace to others. Whereas the traveling, trumpet-sounding announcer of Christ is clearly ignored and in some cases told to shut up, these quieter practitioners have provided no grounds for confrontation and can feel as though they can continue to invoke spirituality in the public setting. Other riders may not be looking to the the readers for spiritual guidance or protection, but does the fact that they can continue suggest that other riders gain something from the circumstance? Cell phone users on the LIRR are just barely tolerated even though cell phone use is commonplace; loud callers meet with public disapproval. There is nothing to be gained but unwanted details from tolerating a loud cell phone talker. Perhaps this is not the case with those who read religious texts and perform other religious rites.
I'll turn this over to you, Readers. What do you think? Aside from free speech arguments—the issue is not whether they have the right to read the Bible or say the rosary—do these acts of public prayer have a larger impact on the group?
[Note: This post was modified from it's original version to correct for grammatical and formatting inconsistencies.]