On the Subway: Life Goes On

On Saturday night, a "crudely" constructed car bomb was located and dismantled in Times Square. While a certain degree of anxiety is to be expected, my fellow commuters seemed rather nonchalant about the whole deal this morning. While subway riders had their newspapers open to relevant stories, few folks were talking about the event. One gentleman remarked to a companion, "Glad they stopped it in time. But this is the world we live in—you try and plan to be safe and you do the best you can." 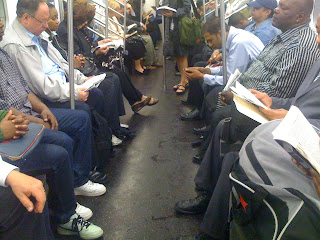 [Right: Subway riders catch up on the news.]
He then turned the page to what seemed to be bigger news, the Mets' loss to Philly over the weekend.
And in many ways, he's right. When news of the car bomb broke early Sunday morning, S and I reviewed the details over breakfast at the diner. We had actually been in Times Square on Friday night for a show, so we spend a minute reflecting on timing. (S and I had also had dinner at the WTC days before the buildings were destroyed.) We spent 5 minutes confirming our rendezvous point should I need to evacuate the city, and my planned methods for getting out as quickly as necessary. And that was it. Glad that the situation had been defused, we went back to our eggs and coffee, and I boarded the LIRR and the subway this morning without much of a second thought.
While it horrifies some of my friends who live and work in other states that I have emergency evacuation drills in my building at work, and that I have a "survival" pack at my desk (which includes flares, water, and a heat resistant blanket), it's not something I spend a lot of time thinking about.
The mental resilience of human beings is something that never ceases to amaze me.
© Krystal D'Costa