A subway car not frequently seen and station signage—my adventures in the NYC subway system continue. 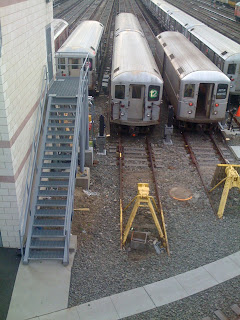 While walking across the LIRR bridge to Citi Field last week, I noticed something in the train yard that made me pause. Amongst the sleeping 7 trains and an errant redbird or two, a green sign glimmered in the light of the setting sun. Sure enough, it was a subway car with a green numbered rollover—a number 12 train of all things! [Right: A 12 train sits in the train yard at Willets Point.]
I had never seen as 12 car before, and the subway car was of a more recent design so I was naturally curious. The only green rollovers I know of are the 4, 5, 6 lines in Manhattan. A quick search on the web turned up the answer at NYC Transit Forums: The 12 was apparently an express 6 at one point in New York City's subway history. Wikipedia adds that in fact the trains were in service from 1924 to 1931 and were known as the Lexington Avenue Line. They ran between Park Row and Eastern Parkway with extended service east to Crescent Street and sometimes to 111th Street or 168th Street along the Jamaica line. The line was closed in 1950.
NYC Subway Maps, © nycsubway.org [Left: 1939 | Right: 1948.]
In both instances, the 12/Lexington Avenue Line belonged to the BMT division. (Click to enlarge.)
As an added note, I was standing on the Chambers Street platform waiting for a local train when the subway signage caught my eye. In the early days of the subway, architects Heins & LaFarge designed beautiful subway stations with signage that included landmarks to help travelers find their way. A few of the original plaques and typefonts remain from this time. For example, the Chambers Street station appears to have an administrative type building featured in its mosaic—fitting given the number of government buildings in the area. Anyone know what the mosaic actually refers to? 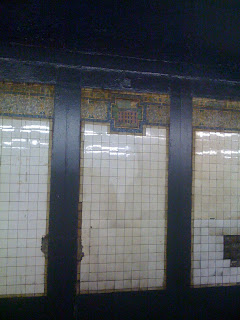 [Above: Mosaic at Chambers Street subway station on the 1/2/3 lines.]
© Krystal D'Costa