Extra! Extra! (Some) Print Media Is Not Dead! 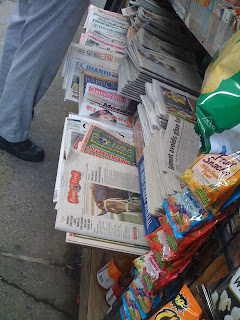 There is a newsstand that I walk past every morning that seems to have every newspaper in the world—okay, maybe I'm exaggerating, but the myriad languages prominently displayed definitely earns a second glance from me. The majority of papers seem to be in Spanish, but I'm sure I've seen Russian, French, and possibly Polish. Strangely, the Asian languages are absent. While I often see folks picking up the trademark pink Financial Times (which seems to be a natural choice given that we are in the Financial District), I often wonder who purchases the other papers. The news that the international editions contains are definitely not current in the sense of our own daily newspapers. Often they are weekly digests, so the events they cover are at least a week old. Surely, it might be simpler to get this information online—which is where most folks seem to get their news anyway, much to the growing dismay of print news outlets. So who buys these papers? And why read them? [Right: A newsstand sells international papers.]

I met Manuel this morning after I boarded the 2/3 train in my usual sleepy state, and slipped into the open seat next to him. (Actually, as you probably know, Reader, I have strategies in place to ensure that I get a seat on most days.) I noticed he was reading a Spanish paper. 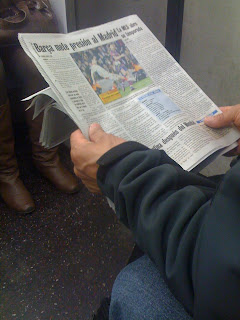 I said good morning and when he nodded at me, I figured it was safe to prod a bit once he had folded up his paper and stuck it in his backpack. Manuel works in a deli downtown. He shares an apartment with a few other men to save money, and tries to keep his expenses minimal so that he can get his own apartment soon. As a result, he doesn't have a computer at home, and relies on international papers for news of his favorite soccer team. He uses public computers at the library for "important" things—checking email from his friends and family at home. Time is limited in these venues, so he has to take care of matters quickly, and often doesn't get a chance to read about soccer at his leisure (and isn't quite sure how to even find this information.) While he also watches the games at local bars, he finds that the paper provides him with much desired coverage and information. But it also connects him with his homeland in a very tangible way. [Left: A subway rider reads a Spanish paper.]
As we move increasingly toward digital means of communication and sharing information, we should be aware that there are still people who do not have the means to access information digitally. I wonder how much longer this may be the case, but my suspicion is that this form of the digital divide will continue long after the Boomers and members of the Great Generation are gone. And with looming budgetary cuts for public institutions, such as libraries, where Internet access is made available to the public free of charge, it seems that access will be further reduced for individuals with limited means of gaining digital access themselves. So for now, at least, some editions of print media are safe.
This leaves me wondering about the double digital divide again. Are we moving in the direction where access to information online will be considered a basic right? Online technologies are already heavily integrated in many daily life transactions, including phones and television. While not free, these services do exist and are available for folks who want to pay for them. I think with the rising popularity and growing prevalence of such technologies, the number of people without access will be fewer and fewer in the coming years (in the United States, at least). But a basic right? How could this possibly work? I invite your thoughts, Readers.