Where Everybody Knows Your Name ...

It's not your favorite friendly bar, but your local coffee spot. Once—okay, sometimes twice—a week, I get my morning coffee from the guy stationed in front of my building. His coffee is good and cheap, and it's a nice break from the decaf tea I try to drink most days of the week. (Sometimes a girl just needs her caffeine.) His name is Ahkmed. He gets up at 2 am Monday through Friday to secure his spot in front of my building and by 11 am is packing up his cart. He sells coffee and tea, bagels (plain, or with butter or cream cheese), pastries, and juices. Unlike other vendors, he doesn't have a grill where he can whip up eggs and bacon—his business is pretty straightforward.  Ahkmed, like most other street cart vendors, is a local—meaning that he's a familiar face, part of the social landscape.

Ahkmed also knows my order. In fact, he doesn't even have to ask anymore, so our minute or two together is spent chatting about other mundane things: the weather, our health, weekend plans. 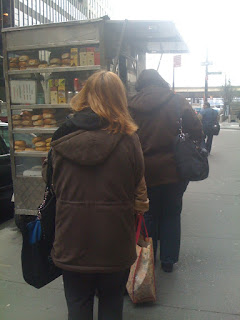 He also says hello if sees me out of the building while he's packing up. Knowing your customer is obviously a good business technique—it keeps people coming back. As much as I look to Ahkmed as a fixture in my social landscape, he apparently does the same. I stopped by to get coffee this morning though;it wasn't my regular coffee day. After exchanging brief greetings, Ahkmed didn't begin his usual routine of heaping sugar into a large cup. Instead he asked, "Coffee today?" I laughed and said "Yes, please!" Our routine restored, he laughed also and said "Today's not your day." So I explained that I would be traveling and needed all the energy I could get. "It's good that you told me," he said. "I look for you. I know my customers." [Left: Waiting in line for coffee from Ahkmed.]
It's a good feeling to be known in a sea of strangers. People want to be recognized; they look for the familiar. In some ways, Ahkmed serves as an anchor for me and his other customers. Yes, I could go to any of the other carts that line the street along the way to my building, I could text my order, I could succumb to the siren song of Starbucks, and possibly become known to these vendors too. But Ahkmed is convenient, and his friendliness is a welcome change. Some folks might be troubled by the fact that their comings and goings are noted, but in this case, I hardly think that his motives are sinister. We operate in the same sphere. It's no different than noting where the subway entrance or mailbox is along your route. My interaction with Ahkmed is just another manifestation of the social order—the routines that govern our lives and the people in them.

And I'm sure you've encountered this as well: the surprising realization that your routine is noted by someone else. See, for example, the runner who wrote to the NYT's Metropolitan Diary (see the last letter) about wanting to cheat on her run and finding that a neighbor was keeping count for her. Share your stories below.
© Krystal D'Costa