More LIRR adventures to report on today: So on the evening commute home, in addition to my recently identified seat buddy, the car I normally ride in is also populated by a group of seat savers. The group consists of three adults, two men and a woman. I've designated the leader as one of the men who is available to board the train as soon as it pulls into the station—it is he who determines where the group will sit and reveals the nature of the party for the day. For example, if all three are present for the ride home, then the "leader" secures one a pair of the three seaters that face each other allowing for groups to sit together, as depicted in the graph below:
Seat Direction:
[Above: Diagram demonstrating orientation of "group" seating on the LIRR, where F indicates a pair of seats that face each other. And X is a seat in a normal row, oriented as indicated by the adjacent arrow.]
If only two are present for the journey home, however, the "leader" holds a normal row, so that the pair can sit comfortably with the center seat as a communal spot. How exactly does he hold these seats? Well, he positions himself at the entrance to the row so that no one can pass, puts his large bag down in the center seat, and then takes his time removing his jacket. If he finishes this routine before one of his companions joins him, then he takes the aisle seat, and sprawls a bit in the row. He may busy himself with a BlackBerry or paper, and looks engrossed so no one asks him to move. At this stage in boarding, I should mention that traffic is fairly light, and seats are plentiful. Most boarders are able to secure rows for themselves. His companions arrive just before the final rush to board when the rows are filled in with additional passengers and their baggage.
In an early post on this blog, I discussed the "playground rules" that we carry into adulthood—in other words, the behaviors that govern civil social relations. Can we add the practice of saving seats to this list? 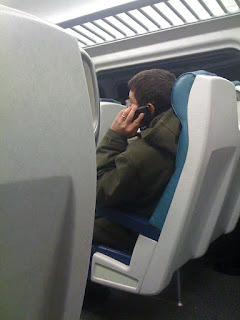 In the lunchroom of your childhood, do you recall saving seats for friends so you could eat together? Do you recall ever finding a seat closed to you because it was closed? This group has recreated the lunchroom, but is this permitted? After all, the space the "leader" saves is public space, and really should be accessible on a first come first served basis. He has no such privilege as a saved seat. But is this any different from the habitual seeking of a "regular" seat by individuals? I posted previously about the seating patterns that a fellow commuter and I create on a daily basis. We're not necessarily entitled to the seats we claim either, but I propose that we use these patterns to create a sense of familiarity for ourselves. Arguably, these individuals are also creating a familiar setting. What are your thoughts? [Left: The "leader" on his BlackBerry with one of his companions. He was only joined by one member of his party on this day.]