I'm always interested in changes to the landscape because I think that these changes are often reflected in the social landscape as well. Landscapes are no longer solely managed by natural forces; we actively mold our landscapes, imparting meaning as we add functionality. 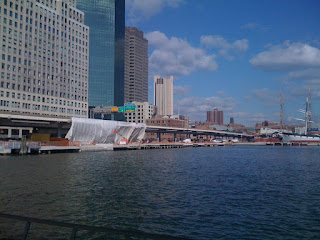 For the last three weeks or so, my building has been in range of a generator. It's a powerful generator being that it's located near the Brooklyn Bridge (about 0.5 mi/0.8 km) and my coworkers and I can hear it clearly from cubicles in central areas of the office. The eastern offices have the worst time of it, and on a few occasions colleagues in these locations have fled, seeking out cubicle space on other floors. The reason for the constant hum of the generator is a landscape change along the East River. And thanks to a break in the recent freezing temps, I had a chance to explore. [Right: View of one phase of East River development from nearby Pier 11. Jan 2010.]
In 2008 the East River waterfront was largely a walkway under the FDR Drive with a few seating areas. Major points of interest included the Seaport and a green space just north of the former location of the Fulton Fish Market. In April 2009 many of the open seating areas and river views were blocked off between Wall Street and the Seaport as the Economic Development Corp. (EDCNYC) began their East River Waterfront project.This project has been described by EDCNYC as a:

bold and ambitious plan for a stretch of the New York City waterfront that currently suffers from weak connections, a lack of amenities, and underutilization. The project will contribute greatly to improved quality of life for local residents, workers and visitors alike.

The project will install more green spaces, and if pictures are to be believed will change the face of the East River, which has long had a rugged, industrial personality. For a long time, the space between Wall Street and the Seaport were just fenced off. Workers in the area knew change was coming—considering getting a seat on one of the benches near the water suddenly became a much more strategic exercise—but its doubtful many really knew what was in the plans. When the bulldozers rolled in, the waterfront became a very noisy and congested place. I began to avoid it, withdrawing from the hunt for a seat on a sunny day and taking walks along Water Street to the Battery instead. Part of the plans call for the redevelopment of pier space, and my days often held the background noise of machinery pounding pillars into the riverbed. But it seems we have reached a new stage—one that involves a very loud generator. I plan to post more pictures as we go along, but for now, here's a look at where we are and where we're hoping to go: 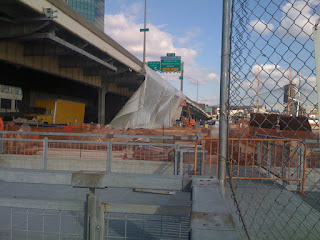 [Above: As close as I could get to riverfront development near Wall Street. This is the same section as viewed from the river above. Jan. 2010.] 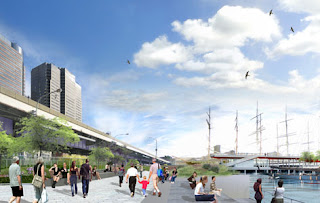