To Jackson Heights Via the No. 7 Train: Explorations in Diversity (JH 1) 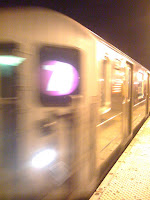 This week, using a three-part series, I want to take you to a small corner of New York in the borough of Queens known as Jackson Heights—specifically, 74th Street and Broadway, a fabulous ethnic enclave where South Asians have settled and transported major cultural components, such as food and clothing, that have become huge economic elements in preserving (and presenting) Indian culture. [Right: No. 7 train pulls into the station.]
Queens has long been heralded for its diversity. In fact, while working on the Genographic Project, anthropologist and geneticist Spencer Wells wondered if it would be possible to sample all the major DNA lineages on Earth in a single street. He went to Queens—Astoria, if you're interested—and found that all 193 volunteers carried markers for virtually all the major migrations that account for our presence in every corner of the globe. People in Queens can claim a myriad of nationalities; they've also been swapping genes for generations, sharing their genetic heritage through intermarriage that has seen cultural and religious boundaries restructured and helped make cultural and religious practices more well-known to cultural others.
Excited yet? Well, to get there, we need to take the subway. Over 4.3 million people ride the subway every day, and as readers of this blog know, the volume of people on the subway makes for some interesting interactions and behaviors. 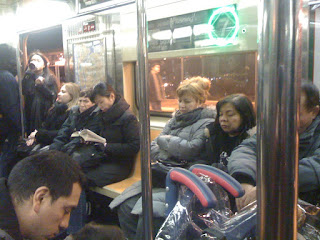 The No. 7 line passes through one of the most diverse areas in the United States. Passengers on the No. 7 hail from India, Bangladesh, Korea, China, the Philippines, and many Latin American countries—and this is just the tip of the iceberg in terms of origins. The subway provides a natural mixing ground, and for new immigrants, it can be the initial point of contact with members of other cultures, which can create some colorful images regarding the concept of "mainstream." Living and commuting in such close proximity, it's natural for their to be some crossover. But given this clamoring of differences, it's also important for these people to preserve their identities, which brings us to Jackson Heights. [Left: Evening commuters on the 7 train.]
While there are several such "ethnic enclaves" along the No. 7 line, I chose Jackson Heights because it provides easily identifiable contrasts that I can hopefully connect people with—samosa, jalebi, lengha, the words themselves take speakers away from the ordinary. South Asians have built Jackson Heights into a bustling center of commercial trade in cultural commodities, capitalizing on both new immigrants' longing for their homeland, and the fascination the mainstream holds for the "other."
My goal for Anthropology in Practice is to show you that anthropological observations and understanding aren't limited to the other. (My secondary goal is to try and help dispel the notion that all anthropologists carry whips, rob tombs, and otherwise live a fabulous Indiana Jones lifestyle—archaeology is an important part of anthropology, but not a single archaeologist I know has been involved in a plot that included live dinosaurs or the Ark of the Covenant.)  And I hope that I've been successful in showing that the nuances of our lives, the things we take for granted, are interesting—and telling about our relationships to each other and to the world. Our interactions with each other and our environment shape our world. And I don't mean this in a preachy way—my point is that we are very actively involved in creating the world we live in whether we realize it or not. 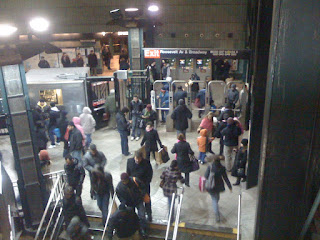 [Above: Subway stop at 74th Street-Broadway bustles with diversity.]
I'm fortunate because New York City offers a unique laboratory in which to examine the interplay between relationships and roles. The multicultural nature of this city adds a complexity to the social order that may not be readily apparent elsewhere. Come back and explore Jackson Heights with me—let's take a look at the management of cultural resources.
© Krystal D'Costa