Sometimes All That Glitters Is Indeed Gold (JH3)

Having eaten, it's time to explore the shops in Jackson Heights. There are few other places where the store fronts offer such a sense of decadence and vibrancy. Garments in colorful fabrics with intricate embroidery adorn mannequins, while ornate 24K gold items gleam brightly from behind thick glass panes. This place calls to true fashionistas—the flurry of color and sequins (and increasingly daring cuts for tops) and heavy jewelry pieces may not appeal to everyone.
Indian clothing is distinct. While other cultures may designate certain clothing as "cultural" and limit them to special occasions, the style of Indian clothing permeates all aspects of life. For example, saris can be worn everyday or for special occasions, such as weddings. While foods may be governed by a sense of nostalgia, clothing is a way of life—it's an expression of identity and belonging, both regionally and culturally. 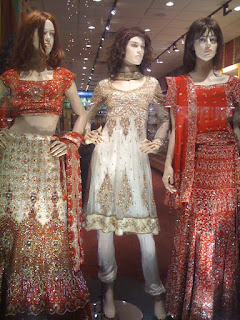 For many South Asian immigrants, clothing is a way to connect to their homeland, but it is also a statement of who they are. It can help younger generations, who may have limited knowledge of their roots, develop a connection to their cultural heritage. The clothing industry also provides a chance for dialogue to occur between South Asian immigrants and their native land: immigrants get a sense of what's acceptable or becoming trendy from the products they are importing, while their purchases tell retailers and manufacturers in India and the surrounding areas what could have international appeal, and how immigrants want to represent themselves. The outcome of this conversation is an overall shaping of culture—it must retain it's historical significance and meaning, but meet the needs and expectations of those outside of its direct influence. [Image Right: Mannequins model different Indian outfits.]
Gold is also culturally important to South Asians (as well as others.) National Geographic had an extensive feature on gold early last year and the significance many cultures afford this shiny metal. India leads the world in demand for gold, consuming 773.6 tons of gold (about 20% of the world gold market) in 2007. According to the article:

India's fixation stems not simply from a love of extravagance or the rising prosperity of an emerging middle class. For Muslims, Hindus, Sikhs, and Christians alike, gold plays a central role at nearly every turning point in life—most of all when a couple marries. There are some ten million weddings in India every year, and in all but a few, gold is crucial both to the spectacle and to the culturally freighted transaction between families and generations. "It's written into our DNA," says K. A. Babu, a manager at the Alapatt jewelry store in the southwestern city of Cochin. "Gold equals good fortune."

The degree to which gold is embedded in Indian culture is apparent from the shops that line 74th Street. However, while food and clothing (albeit at a lesser degree) serve in some ways to link South Asians immigrants to both mainstream and native cultural forces, gold seems to be mostly an internal currency. That is, while food and clothing are cultural identifiers that can be used with a greater public, gold appears to circulate internally within the immigrant group as a way to solidify their connection with one another. 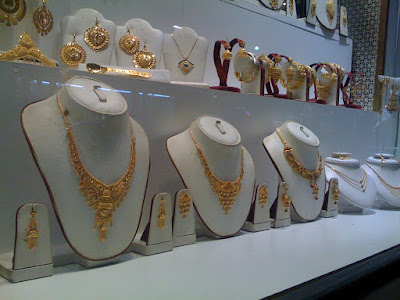 [Above: A gold display in Jackson Heights. Dec. 09]
The exchange of gold via the dowry practice versus the sale of food and clothing provides an interesting lens to view the ways cultural resources can be leveraged to claim an identity with a mainstream group or larger public and confirm an identity with those in the same group. At a glance it would seem that clothing also operates in this manner—when "others" view Indian clothing, it allows South Asians to claim an identity, and in wearing these items South Asians are confirmed to each other. Yet, there is a larger dialogue that occurs here that permits culture to be shaped, or transformed, or adapted, if you will. 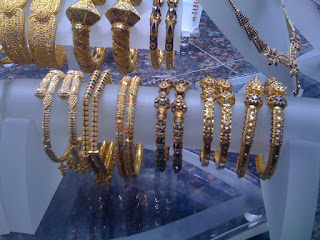 There are multiple sources of input involved: the immigrant group, the native group, and the "other." All three are reacting to the physical representation created by clothing and influencing each other to varying degrees. Whereas when gold is exchanged via the dowry, confirming the cultural allegiance of the participants, it is a more local dialogue. Gold is a cultural preservative. [Image Right: Gold bangles.]
See, I told you you didn't have to go far to experience anthropology. As luck would have it, it's only a subway ride away.
I'm interested to hear your take on the JH series, and the management of cultural resources by groups, particularly immigrant groups but any type of group you'd like to discuss is welcome. Hope you all enjoyed our little excursion to the Borough of Queens. If you'd like to visit, I dug up this little guide to help you along from the New York Times.
© Krystal D'Costa