The Shinnecock Get Recognized (Updated)

New York's People of the Stony Shore, the Shinnecock Indians, have finally been approved for federal recognition, which would allow them greater weight in some of the land disputes they have faced in the surrounding Hampton area—which, by the way, is playground/getaway for the wealthy. A follow-up article has reported that the Shinnecock have plans to build either a Class II (slot machines only) or Class III (tables permitted) casino now that they have been federally recognized.

It's great that the Shinnecock Indian Nation has been granted this status because it means that they will have greater authority over the survival of the tribe and the management of their resources. Federal recognition


formally establishes a government-to-government relationship. Status as a sovereign entity carries with it significant privileges, including exemptions from state and local jurisdiction. These exemptions generally apply to lands that the federal government has taken into trust for a tribe or its members. Additionally, federally recognized tribes are eligible to participate in federal assistance programs. Through these programs, tribal governments may receive funds that they can then use to provide community services, such as health clinics.


I think it is important that these groups have the power necessary to sustain their cultural heritage, but I'm troubled by the plan to build a casino. Perhaps it's because I recently visited a slots-only facility and found it depressing and maddening. The rows and rows of machines offered no escape, and the constant electronic pings and dings was mind numbing. 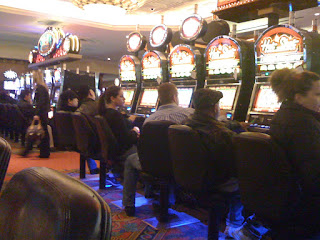 I couldn't wait to leave, and vowed it would be a VERY long time before I returned (at all). The place had an air or desperation as lines grew at the ever-convenient ATMs and eager gamblers prowled the aisles searching for that lucky machine. I haven't had this reaction at every casino I've visited—the nearby Mohegan Sun, Foxwoods, and Atlantic City are all more bearable, perhaps because the facilities are larger and offer other distractions in addition to gambling. Still, these venues don't seem to have quite the amount of gloominess attached to them. People are visiting the ATMs, but they look less stressed about the withdrawals they are making. [Right: Playing the slots.]

But this isn't a post about the patrons of these establishments. I understand the Shinnecock view the casino as a source of revenue, but is it the only source of revenue available to our remaining recognized Indian tribes? It seems that this is a prescribed course of action—at least in this area.  Yes, it provides jobs, and funds for the community, but ... I don't know.  Are there any other means for Indian tribes to become economically viable? I guess we'll have to wait and see how this unfolds. The slot machine facility I visited was in close proximity to an urban area, which meant its clientele was slightly different than the other places I mentioned. Perhaps that's also a factor in the successes of these types of endeavors.

UPDATE: The NYT featured an article on the debt incurred by the Pequot tribe in managing Foxwoods on Monday, Jan. 10th.