The Management of Personal Space

How much space are you can you reasonably occupy in public before you're considered obnoxious?

During the evening rush hour yesterday on the 2/3 subway line, I camped out at my usual spot on the platform, and boarded per usual when the doors opened right in front of me. I snagged a seat across from a woman with a baby in a carriage. The carriage was positioned in front of her, so that she could feed the infant a bottle, but it blocked a seat adjacent to where she was sitting. She was seemed oblivious to the people who boarded stop after stop and looked at the empty, inaccessible seat. 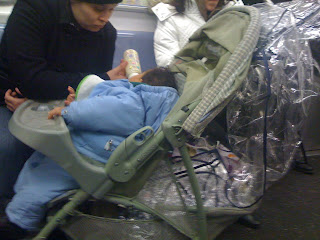 After the feeding, she leaned back on the arm of her male companion who was sprawled over two seats in the corner. No one asked her to move the carriage (and no one asked him to shift), but should she have made an attempt to clear the space so that someone could take the available seat? [Image Right: Carriage blocks available seat on the train.]

In New York City, we spend a lot of time in close quarters with strangers, yet this has not diminished our sometimes ferocious responses to invasions of what we feel is our personal space. But my question is this: in public, how much personal space can we reasonably claim for ourselves before we start to infringe upon the space of others?

This woman was tending to an infant, and I am sure that this held the annoyance some people may have felt in check. But this is not an uncommon occurrence. Sprawlers on mass transit are fairly common, particularly during non-peak hours. And on the LIRR, commuters have developed extensive strategies to claim space for themselves. For example, the seats are arranged in rows that can feasibly seat three people, most riders will occupy either the aisle or window seat and will use the middle seat as a "communal" space to store bags and other personal effects. In two-person rows, a common tactic for riders who want the row for themselves is for the rider to take the aisle seat and place a personal item in the window seat. At a glance, the row looks full, and most people don't want to ask others to move—it does happen, but it often feels like a production as the seated person who has to move will grab his or her bag(s) and/or package(s),appearing to bulk up in the process, and tends to sit down again with much reshuffling. There are overhead racks on the LIRR that can be used to store items, but these aren't used very frequently. 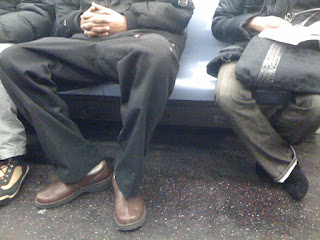 [Above: A sprawler on the subway. Could someone else have fit into the space available if he was not spread out in this way?]

We all have a right to be comfortable, and sometimes overcrowding on mass transit can hamper this, but what are our boundaries? And why do some people seem to overlook them? No one wants to rub shoulders (and other body parts) with complete strangers for the entire duration of their commute, but have we grown more opposed to any contact with others as we engage in a more digital existence? This morning during my commute, I snagged a two-seater row on the LIRR and promptly took the window seat leaving the aisle available. (The window seat option lets me nap to my destination without having to move to let the other rider off, so I personally think it's a better deal, and not too much of a hassle to have someone sit next to you. 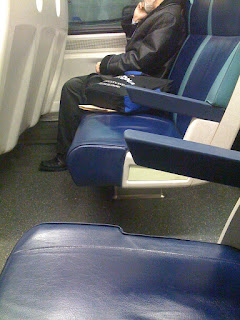 But then again, I'm a fairly small person who doesn't take up too much room). She said good morning to me as she sat down! A total stranger wished me a good morning as she entered the area next to "my" personal space! I was stunned. Sure, I speak to some of the people I see on a daily basis at my LIRR station, but people just don't seem to do this anymore—and by this, I mean acknowledge one another. The expansion of our personal space demands seems to coincide with the growing mobility of our personal lives. Our electronic gadgets that work so hard to connect us seem to have enhanced our need for a larger buffering zone in the "real" world. Perhaps we're less aware of each other as a result of the amount of time we invest checking BlackBerrys and iPhones, listening to iPods, playing video games, and so on. And as a result of being less aware of others physically, we ourselves expand—not physically, but in terms of our sense of self. [Image Left: A bag occupies a "communal" seat on the LIRR.]

Or is this simply a NYC (or urban) phenomenon? Perhaps people are perfectly reasonable about sharing space in other places. What do you think?