On the heels of the closing of famed New York City restaurant Tavern on the Green comes news that another landmark, the Plaza Hotel, continues to struggle. In my recent post on the demolition and reconstruction of Penn Station, 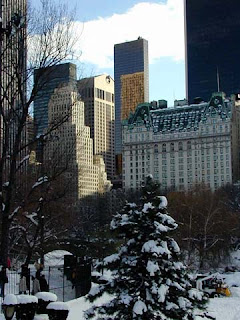 I reached a troubled peace concerning the price of history—acknowledging that despite the best efforts and intentions, we will still lose physical representations of our history. (I'm also currently reading The World Without Us, which has has me thinking a great deal about permanence.) While I clearly tend to get excited about the "incidentals" of history (e.g., an old well, fading commercial signage, the ruins of a hearth, a foundation line, old boundary lines), monuments tend to command public attention. The importance awarded to both "types" of historical artifacts however stems from a connection made with them, which prompts me to question how landmarks come to be—not the official process of designation, but the personal recognition from citizens that award a special status to certain places and monuments. How are these connections formed? [Right: The Plaza overlooks a snowy Central Park. Photo from New York Architecture Images.]

In The World Without Us, Alan Weisman explores the future of the planet after the human species is gone. In short, nature will erase most traces of our presence as it reclaims spaces we manipulated for development. He notes that we very rarely consider our impermanence as a species. The original seven wonders of the ancient world, for example, were meant to last through the ages, though only one—the Khufu pyramid—survived the test of time. And even the pyramid is slowly being ravaged by nature as erosive forces strip the outer layers away, gradually reducing its size. One day, Weisman proposes, it will be nothing more than a hill. The other wonders were felled by assorted natural and human efforts: decay rendered the towering wooden Statue of Zeus and the Babylonian Hanging Gardens obsolete; earthquakes erased the Colossus of Rhodes and the Lighthouse of Alexandria; fire ravaged the Temple of Artemis; and Crusaders razed the Persian Mausoleum of Halicarnassus. Once a testament to humankind's supreme ability to conquer and command their surroundings, all but one of these monumental feats of construction are gone—and in their absence, others have taken up residence in their place, new testaments to our ever-growing ability to manipulate and mold our environment. Weisman suggests that the ancient wonders earned their status as a result of beauty, but also as a result of their sheer size:


The Plaza is no modern wonder, but in some ways this sentiment applies to it and all other grand landmarks. To gain landmark status is to find protection in memory from the assault of modernity. The Plaza, much like the original Penn Station, captures a moment in New York City's history when the city had come of age. 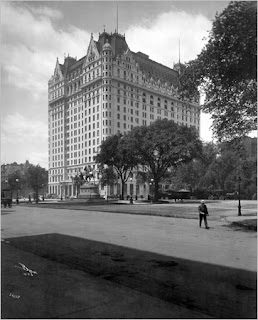 New Yorkers had finished taming the island and surrounding areas, and could now focus on cultivating an image. One of the reasons for the public outcry at the destruction of Penn Station was that it was viewed as a major entry-point into New York City. Citizens felt that the grandeur of the station was a fitting welcome to what was certainly a grand and daunting city even in its youth. Completed in 1907, the building was meant to resemble a French chateau. According to the Plaza's official historian Curtis Rathje, the hotel was originally built as an extended-stay establishment, so that the wealthy could maintain an apartment in the city and escape to their country homes as needed. The Plaza thus was meant in some ways to serve as a stylish entry-point to the city as well. [Left: The Plaza in the 1907. Photo from The Bowery Boys.]

And it certainly served in this capacity, as a number of celebrities have used the Plaza address as their own. Through the ages, the Plaza has come to represent an element of the city itself—perhaps the city as we want to remember it. The sense of grandeur is still there, as is the status associated with it. It's a part of the New York City social culture. But perhaps now it is protected in part because it reminds us not of what we have done, but of a moment when the city had grasped a sense of itself. I realize that I am speaking of the city as a sentient organism, but in this sense, I am referring to the collective feeling of citizenship and community held by residents. In 1907, a hotel of 18 stories was no mean feat. It was a monumental accomplishment for its time—much as the Colossus and the other ancient wonders were for their times. But the Plaza retains its poise amidst its neighbors who now tower around it. It is no longer a literal monument, but has importance because we choose to remember it as such.

Let's hear your thoughts on this—To what degree does memory effect the possibility of preservation? Do landmarks and public monuments draw on a collective memory? How do you think these are formed?