Chicken Tikka With a Side of Culture (JH2)

In the first installment of this series, I invited you to ride the No. 7 subway line with me to Jackson Heights, and enjoy the sights and sounds that mark the diverse population that lives in the borough of Queens. Today we'll explore Jackson Heights a bit and note the strategies employed by an immigrant group to both maintain ties to an ancestral home while simultaneously establishing roots in a new homeland.
But first, a bit of history. Jackson Heights, and really, much of Queens, was originally meant to provide a refuge from city life. Originally nothing more than a marshy section of Newtown (now Elmhurst), the area was mostly farms and fields. But Manhattanites were running out of room on the island. In the 1840s, they had begun to move uptown, but at the rate the city was growing, New Yorkers would have to spread to the outer areas of the city if they wanted a respite from the traffic, noise, and general bustle of city life. The completion of the Queensborough Bridge in the early 1900s encouraged those who could afford the rents and mortgages to flee to greener pastures in Queens, much in the same way the earlier finished Brooklyn Bridge encouraged an exodus to Brooklyn.. According to the Jackson Heights Beautification Group:

Though not explicitly stated in promotional material, it was widely known at the time that only white Anglo-Saxon Protestants were welcome in Jackson Heights, as was the case with such other middle-class suburban developments as Forest Hills Gardens and Garden City.

Within a matter of a decade, the neighborhood was a thriving garden community (much of which still remains, though the gardens are private and largely removed from public view). In any case, the financial crisis of the 1930s and the subsequent wars left many home owners in Jackson Heights with financial woes. As a result, many of the apartments were divided, and subsequent developments were offered as co-ops. The 1950s and 1960s saw an influx of young families to the neighborhood, including many immigrants attracted by the small town feel of the neighborhood.

[Image Above: Bird hunter at Trains Meadow (a road running through what would become JH), c. 1900. Image from Forgotten-NY.]
Jackson Heights today retains echoes of this small town feel—a stroll down 74th Street can transport you to an entirely new place. 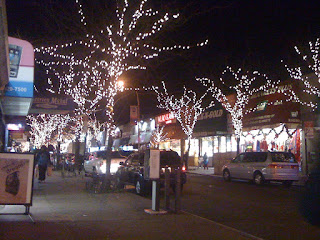 The street is dominated by the Patel Brother's ethnic grocery store, which is flanked by restaurants, and clothing and jewelry boutiques. The evening that I visited, the streets were still quiet around 6:30 pm as the dinner rush and evening commuters looking to grab last minute ingredients from the Patel Brothers had not yet descended on the scene. It was dinner time, though, and what better way to experience a culture than through it's food? [Image Right: 74th Street, Jackson Heights, Dec. 2009.]
Indian Taj, which I mistakenly identified as Jackson Diner originally, was relatively quiet, but filled up quickly—and wouldn't you know, my fellow diners were representative of the diversity of the area: a large Asian and Caucasian family settled behind my table, several South Asian couples were scattered throughout the restaurant, and a sole Latina woman secured a table by the door (from her familiar manner with the wait staff, it appeared she was a regular). 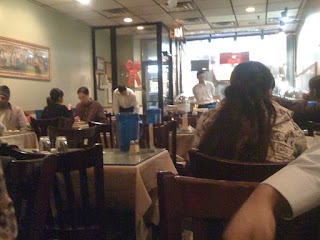 But as I mentioned on the train ride over here, this is hardly surprising. These groups live in such close proximity to each other that it's expected you'd find a mixing of different ethnicities—people must be curious, and you can't overlook the element of convenience. Like my local multi-ethnic grocery store Manaan, which I explored in an earlier post, the Patel Brothers provide a variety of South Asian ingredients and a plethora of produce. It's probably the best place for produce in the area, and regardless of cultural or ethnic background, who can pass on a deal like that? Particularly for people whose diets consist largely of fresh produce? [Image Left: Jackson Diner fills for dinner.]
Rather, the experience offers an opportunity to look at ways immigrant groups navigate and manage their cultural identities. Food is a powerful connector. A familiar dish has the power to transport you to your childhood, your favorite memory, your past. Clearly as the Indian immigrant population grew, a sense of nostalgia grew with them. They imported the comforts of memory to help them contend with the difference around them. But their imports came to define them in the eyes of the other cultural groups. Quick, name an Indian dish! Are you thinking of chicken tikka, naan, or dhal? 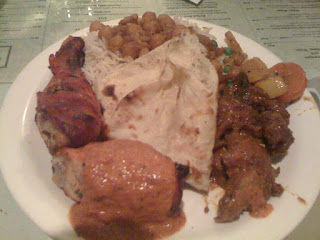 Indian cuisine can be rich, spicy, sweet, savory, and fragrant, but these experiences have been muted by the process of immigration, and assimilation. Instead, the culture—as have many other immigrant cultures—has come to be defined by a few readily recognizable items. Of course, commercial appeal has to be taken into account. Importing goods for a specific group may serve that group's needs, but it can be financially limiting. Now if those goods can be transformed to have mass appeal, and draw the specific group in addition to curious outsiders, well the profit margin increases. In the face of these types of pressures, culture is molded to an intermediary form. [Image Right: On this plate clockwise to center, chickpeas, chutney, chili chicken, chicken makahani, tandoori chicken, basmati rice, and naan.]
But that shouldn't dull your enjoyment of what is actually available. I've encourage you before to investigate local markets and draw your own analyses based on what you find regarding the establishment's relationship to the mainstream order. In the final installment of this series, we'll explore some of the shops along 74th. In the meantime, let's hear your thoughts on assimilation and the use of cultural products to mediate relationships and positions within the social order.
© Krystal D'Costa