An Apple and an Orange Were Hanging From a Tree ...

Stop me if you've heard this one before:


An agricultural student said to a farmer, “Your methods are too old fashioned. I wouldn't be surprised if this tree bore less than twenty pounds of apples.”

“I won’t be surprised either,” said the farmer. “It's an orange tree.”


All joking aside. How much do we really know about the food we eat? How do items like fruits and vegetables get to the supermarket? What goes into packaging and processing them so they're safe to eat? Are local foods better? 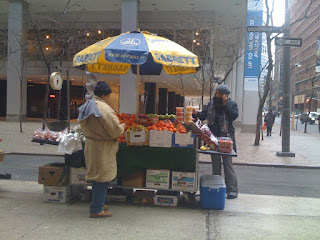 Some vendors sell fruit, providing some city residents with a source for fresh produce. I have access to one such vendor just around the corner from where I work. He's there everyday, unless its a federal holiday, pedaling his wares, rain or shine, on numbingly cold days and lazy warm ones. On Monday, he had taken refuge from the soaking rain under an overhang from the building. He sat in a folding chair, keeping watch over his goods. Very few people seemed to be buying fruit, but he maintained his position. [Right: An interested customer browses at the fruit stand.]

A recent cold spell in the United States has caused produce shortages. My local supermarket has posted signs indicating that the price of certain items, such as strawberries and tomatoes, has increased as a result. Yet the street vendor still seems to have a full stock. He's undoubtedly been affected by the same problem, but his prices haven't fluctuated in the same way. Though he doesn't have the same overhead to manage, he also doesn't have the luxury of raising prices. If he raises prices, he loses customers. And the cost of lost business isn't something he might readily recover from. The supermarket can recoup its losses from low produce sales via other products and still cover overhead and staff, but the same isn't true for the fruit vendor.

The image of the vendor sitting his folding chair stayed with me though. Like others, I have begun to think more and more about my "carbon food print": where my food comes from, and the costs—both to my wallet and the environment—of my choices. (Though I have to admit that I'm not giving up hamburgers just yet.) The idea behind the carbon food print is similar to the carbon footprint: it looks at the resources required to grow and transport food from the farm to your refrigerator. A result of this growing awareness has been a movement encouraging people to purchase locally grown produce. Luckily Long Island has a thriving farm community so produce like spinach, broccoli, apples, strawberries, and peaches are easy to obtain from local sources. And I don't have to travel far to take advantage of this either: my supermarket supports local growers at no real premium to me. Still, despite local efforts, certain fruits must be trucked/flown in. Oranges, for example, are difficult to grow in the Northern United States. It's certainly possible, but they'd require additional resources to survive colder temperatures. Unless you've got a giant greenhouse handy, and the funds to keep it running, it's probably not worth it. So in terms of making a greener purchase, whether you buy your oranges from the supermarket or the street vendor makes no difference—they've both likely had to get the oranges from a non-local source. On the other hand, if concern over the origin of food is an issue, it seems to make sense to buy apples from the supermarket where you can be sure that they came from a local orchard. There's no guarantee that the street vendor purchased his apples locally—he may be relying on a third party to get him his fruit, which also adds another layer to the to the whole carbon food print picture.

Still, I admire the entrepreneurial spirit of the fruit vendor. And I'd like to support him. A study released last year by researchers from Carnegie Mellon University suggests that in terms of making "greener" food choices, the distance our food travels doesn't seem to matter as much as our food choices themselves:


The authors suggest that eating less red meat and/or dairy products may be a more effective way for concerned citizens to lower their food-related climate impacts. They estimate that shifting to an entirely local diet would reduce the equivalent greenhouse gas emissions as driving 1,000 miles, while changing only one day per week's meat and dairy-based calories to chicken, fish, or vegetables would have about the same impact. Shifting entirely from an average American diet to a vegetable-based one would reduce the same emissions as 8,000 miles driven per year.


Good news for the fruit vendor downstairs. How does this information inform our food choices—if at all? Disparities certainly exist in terms of the availability of fresh produce in low income neighborhoods. For many individuals who live in these neighborhoods, food options are severely limited to processed, pre-prepared foods, such as fast food items. 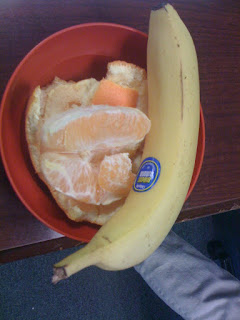 If we put the "green" concern aside here, we're still faced with the fact that over time, continued consumption of heavily processed foods and little-to no produce can have adverse health effects on this population. Creating access to healthy food options is integral, which paves the way for the produce vendor on the street who likely cannot provide solely local products. New York City recently seized this idea and encouraged mobile produce vendors in low income neighborhoods that lack supermarkets, farmer's markets, and green grocers. The mobile produce carts, known as Green Carts, were enthusiastically greeted by residents, and support for the program has grown. If the program really takes off, and more people who didn't have access to produce begin to eat fresh produce, the carbon food print created by these individuals formerly will also be reduced. My local fruit guy doesn't fall under this umbrella, but it seems that opportunities for his enterprise are growing. In a concrete desert, he is a tropical oasis, serving as a reminder that small initiatives can encourage big changes. [Left: Spoils from the fruit cart.]

Where do you get your fruit from? Do you or have you been thinking about your carbon food print? And would you buy fruit from a mobile vendor?