Okay, we're not really talking about acorns today—we're talking about shellfish: scallops, oysters, and clams in particular. What do they have to do with daily life? Other than being tasty (if you're a fan of shellfish)? Everything! The saying "Great oaks from little acorns grow" means that great things can come from humble origins. Believe it or not, in some ways shellfish, which begin life at almost microscopic levels, provided the foundations for New York City.

The waters surrounding New York and Long Island were once rich with oysters and other shellfish. Early settlers reported oyster shells as large as modern day tires; and large shell middens were uncovered as they developed the land, indicating that shellfish had long been an important aspect of Native people's diets. In fact, according to Kurlansky in The Big Oyster, Pearl Street was named for one such shell midden, gaining its name and oyster association long before the dirt tract was paved with shells. Oysters were food for the working class in the New Amsterdam colony—easy to harvest, they were a poor man's delicacy: all one had to do was walk along the banks of the East River. 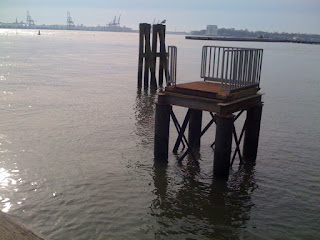 They were also sold from street carts (precursors to our current morning coffee guys, I suppose), and from boats tied up in the canals. When oyster houses opened, oysters were offered at "all-you-can-eat" prices. New York City, would become the oyster capital, shipping millions of the sweetest oysters known all over the world. It's hard to believe, I agree—you couldn't tempt me to dip a toe in the East River for anything today, and the oysters are no more: Over-consumption and pollution decimated shellfish populations. The Long Island Sound has a similar history: rich in shellfish, the waters were over fished, and succumbed to pollution from sewage, agricultural runoff, and industrial wastes. As tides from the East River flushed the Sound, dead waters (lacking oxygen) became common and further added to the stress placed on the marine ecosystem. [Image Left: The East River, Nov. 2009.]

But there's good news: ongoing oyster restoration projects run by The River Project indicate that oysters are returning to the waterways after a 100-year hiatus. And recent scallop harvests on eastern Long Island provide addition support that shellfish may be making a comeback. The Nature Conservancy is also seeing a return on investment: Since 2002, the group has released thousands of baby scallops into Peconic Bay, and this year scientists have predicted a harvest of tens of thousands of pounds of scallops after nearly three decades of poor shellfish returns.

Shellfish are integral to marine ecology. According to The River Project, oysters can filter up to 30 gallons of water per day, removing solids, enhancing clarity, and encouraging the growth of underwater grasses. That's no mean feat for these molluscs that are working in waters contaminated by agricultural runoff, in addition to at least 300 shipwrecks, a freight train, dead bodies, stripped cars, at least one dead giraffe (it escaped from the circus), and about 100 silver bars, plus myriad contaminants. (FYI: The original shellfish population in New York Harbor was capable of filtering all the water in the harbor within a matter of days, but that was also before the bottom of the riverbed became coated with a viscous oil-like substance.) Shellfish also provide an important habitat for young fish with their hard shells and the nooks that form as they create beds. So a resurgence in shellfish around New York City and Long Island is a welcome phenomenon.

I've talked and talked about the connection we have with our landscapes—the ways in which we shape and are shaped by our interactions with our environment, and the legacy this can leave behind: an unintended history of sorts. I'm excited about the shellfish revival not because it's a reversal of history, but because it's a new chapter in our history. One that speaks of growing awareness and responsibility for the natural world. Shellfish fed the New Amsterdam colonists, and provided the basis for a rich trade with the rest of the world—perhaps in some ways establishing New York City as the "island at the center of the world" as Shorto names it, as people looked to it for its rich natural resources. This story is also a good example for the argument that the local should manage the resources in its care: the $2.3 million scallop restoration project in Peconic Bay was funded by Suffolk County.

I'd like to hear from you about conservation efforts in your neck of the woods. Chime in below if you know of any preservation projects currently underway near you. And if you live in the New York City/New Jersey or Hudson Valley area, The River Project is looking for oyster farmers—you can get details here.