Culture in Action 4: Sitting Down at America's Table With the AJC 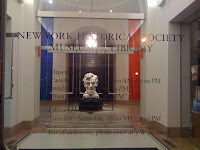 I was delighted to be invited as the guest of longtime AJC member, Dr. Jo Renee Fine. Unsure of what to expect, I was pleasantly surprised by the diversity of the audience and the panelists—who mingled freely over hors d'oeuvres, greeting newcomers like myself with openness and genuine warmth. The group that assembled in the auditorium at the New York Historical Society featured representatives from Bangladesh, Russia, El Salvador, the Ivory Coast, Dominican Republic, Japan, Panama, Brazil, Uzbekistan, and more. They gathered in the spirit of diversity to discuss immigration reform. [Image Right: New York Historical Society, Nov. 2009.]
America's Table refers to the name of a Thanksgiving reader that the AJC developed post-9/11 to provide comfort to its members—a reminder that our success as a nation is rooted in the acknowledgment and celebration of diversity. 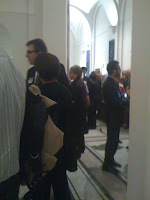 The various interethnic and interreligious programs sponsored and supported by the AJC attest to one of the organization's mission "to welcome and honor the strangers among us." The message that AJC sends through America's Table is that America's diversity is its strength—that the phrase "we are a nation of immigrants" is more than just a sound bite. From the earliest Dutch settlers to New Amsterdam, including Joris Jansen Rapalje and Catalina Trico, to the immigrants processed at Ellis Island until as recently as the 1950s, and the the hundreds of thousands of immigrants in the United States today, both documented and undocumented, this nation is shaped daily by their presence. [Image Left: AJC America's Table reception, Nov. 2009.]
I chose to label this post as a part of the "Culture in Action" series because more than anything, it provided a glimpse at the democratic process in action. The AJC is helping to mobilize the immigration reform movement. As an undergrad, I worked closely with the Trinidadian immigrant population in Richmond Hill, NY, tracking their transition to the mainstream via the adjustment to capitalism and the acquisition of material goods. 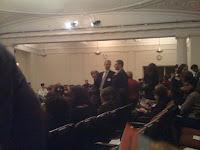 I remember the difficulty I had infiltrating this group and making contacts despite the fact that I myself am Trinidadian. Part of the difficulty I encountered stemmed from the fact that so many of my would-be contacts were undocumented or possessed a tenuous status—having overstayed a visa, or in the process of applying for status adjustment. Many had never heard of anthropology, and were convinced that I would report them to immigration services. Many did not understand the immigration system, and fell victim to unscrupulous lawyers who drained families of their life savings without securing them the status they so desired. I can remember clearly the worry about their future and the future of their children, the loneliness felt for a life left behind in Trinidad, and the determination to succeed. [Image Right: Filling in the auditorium at the New York Historical Society, Nov. 2009.]
Immigration remains a messy issue. For all the people following the "proper" channels to citizenship, 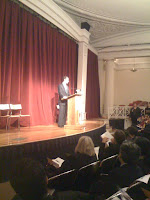 there are many who are not. There are also countless others on the "proper" track who are mired in red tape and who have fallen through the cracks in a very broken system. Congressman Anthony Weiner was present to speak about the strength it takes to leave behind all that is familiar, to uproot yourself from your home and your traditions, and set out to make a new life for yourself. His declaration that immigration reform will happen in 2010 was met with a resounding cheer—with the aside that if it were up to the 100 or so people in the room, 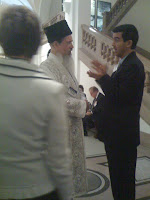 immigration reform could be hashed out in about an hour. He was followed by newly elected Congressman Ydanis Rodriguez, himself an immigrant serving immigrant communities in Washington Heights, Inwood, and Marble Hill. Rodriguez said we didn't need to look to Africa or Asia to find people in need, not when there are tenants at 562 Academy Street who have been living without gas for the last three years. [Image Top Left: Congressman Anthony Weiner speaks at the America's Table program, Nov. 2009. | Image Bottom Right: Newly elected Congressman Ydaris Rodriguez speaks with religious leader, Nov. 09.]
Immigration reform will take more than an hour to sort out. Regardless of your stance on immigration issues, regardless of whether you are a new citizen, a first-generation American, or your family can trace themselves to the Pilgrims and other early settlers, remember that we're all here because someone had the strength and determination to start over. The AJC created the Thanksgiving reader in the hopes that its message would be shared around the Thanksgiving table. I leave you with an excerpt from the 2009 reader:

In America, our differences resonate in our names, language, food, and music. They inspire art and produce champions and leaders.

We feel free to disagree.

We are a family, and what is a family gathering without debate?