In the History Channel series, Life After People, we get a glimpse at what the future of our world could potentially look like after Homo sapiens are gone: cities will crumble, nature will reclaim space that has long been cleared and developed, and animals will live in the markers of modernity that we hold so dear. Imagine a world where the Statue of Liberty is rubble, where there are nothing but stones to signify where your home once stood, and skyscrapers are overgrown with ivy and other greenery. A haunting and fitting image for this Halloween season, wouldn't you agree? What will our remains tell of us? And more importantly, will there be remains to tell a story at all?

In 1986, a team of archaeologists uncovered a cluster of Native American structures from the 14th century in Narragansett, RI. The 25 acre site is an amazing find—the remains of numerous buildings, pottery, tools, a burial ground, as well as 20 circular pits used for storing corn have all been found and offers an extensive look into life in a seaside Indian village:


“It’s just totally remarkable. It’s like suddenly being able to see,” said Paul A. Robinson, principal archaeologist for the Rhode Island Historic Heritage and Preservation Commission. “This allows us to walk through a coastal village and begin to see how it was laid out, the way the houses relate to each other, the different kinds of structures.”


Landscapes can be particularly revealing about daily life as I have discussed previously. Only one other seaside Indian village site of this caliber is known to exist: Werowocomoco in Virginia, which is supposed to have been the home of Pocahontas. The degree of preservation at the site is rare, and if left to researchers, they can learn something about a history that has largely been lost to time and development. According to the article, New England was either plowed or developed as "progress" moved the land inexorably forward, which removed much of the record of life before the colonies.

However, the future of this site remains uncertain. It was purchased by Churchill and Banks Companies, LLC (formerly the Downing Corporation) and earmarked for the development of about 80 private residences. Per state regulations, the company had hired an archaeological team to conduct a survey for artifacts before building began. Clearly, they didn't expect anything like this, and in fact, they've constructed about 26 houses on the eastern part of the site which was cleared by archaeologists. The problem is that the remaining part of the land is stuck in limbo. The original idea was that if artifacts were found, they would be moved to an appropriate place, and the company could commence with development; however, given the nature of the finds at the site, the Historic Heritage and Preservation Commission requested that the Coastal Resources Management Council (CRMC) revoke the permit they had issued to Churchill and Banks. CRMC said the permit would need to be re-evaluated, and when Churchill and Banks tried to build on the site in June 2007, they were given a cease-and-desist order, prompting a 10 million dollar lawsuit on their part. They claim that the rules are being changed midway, and don't view the state's offer to purchase the site for approximately $2 million dollars as fair compensation for the time they have invested and lost in this project.

I have an inside line into the world of archaeology—my good friend Meg Kassabaum (see image at right), a Southeastern US archaeologist, faced a similar situation at the Feltus site in Natchez, Mississippi. Feltus was a threatened site with the potential to provide important insights about Indian life in a period for which there is limited evidence. The site has three large mounds on it. One of which is a burial mound, so it is possible that Feltus was a "sacred" location much in the way the Narragansett regard the location in the Rhode Island. In an email to me, Meg wrote,


The modern fiasco of preserving the site is both more simple and more complicated than the case described in [the other] article. Perhaps most importantly, however, it is more resolved!


As luck would have it, Feltus is located on the land of people who are interested in preserving the past and have no intention of selling their land anytime soon, which means that the site will be available for research for years to come. 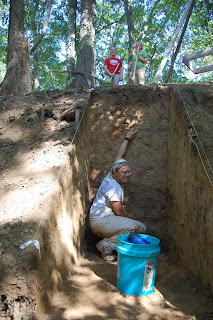 However, while good landowners are integral to the success of archaeology, sometimes collegial relationships aren't enough. Meg reports that in the United States, it is possible for the owner of a piece of land to sell the rights to the underground minerals but retain possession and control of the surface. It turns out that many years ago, the Feltus landowners had sold off the mineral rights to the site. One day Meg and her team showed up at the site to find an oil company surveying the land for a place to put their newest oil well, and were told there was nothing they (nor the landowners) could do to prevent the construction.

Like the Narragansett site, cultural resource organizations mobilized quickly: the historic preservation community in the nearby town of Natchez and the state capitol of Jackson sprang into action—and through the hard work of many people, with "impassioned pleas and logical arguments,"  the oil and gas permitting board was convinced to deny the company its permit for that location, saving the mounds and other archaeological materials at Feltus for further excavation. In Meg's words,


The oil well ended up being built just down the road and we witnessed the destruction of an additional, much smaller archaeological site during its construction.  Perhaps the scariest part of this all is how quickly this all could have happened and how much of the site could have been destroyed if we had not HAPPENED to be working at the site at the time the oil company first showed up.


Rhode Island requires that sites be surveyed prior for archaeological artifacts prior to development, but not all states have these types of regulations—and even in places that do, these laws are often bypassed on the grounds of "budgetary concerns." The Feltus story shows us how easily historical artifacts may be lost, while the Narragansett site illustrates why development companies would want to bypass presearvation laws. Churchill and Banks believe that they have followed the rules and laws as required, and yet there is no agreeable resolution in sight that takes into account their losses.

Without advocacy—and sometimes even with a voice—historical sites can be lost to progress. Even with the economic downturn, New York City has been "in-development." Old construction projects have been finished, and new ones started (though there are admittedly fewer than there once were). The redevelopment of Pearl Street in the Financial District of New York City provides an interesting parallel. Pearl Street dates back to the New Amsterdam colony. It's seen the rise of trade and commerce in the New World, and so when redevelopment began on the site, there was a bit of uproar from interested parties. The Rockrose Development Corp bought the properties on the block with the intent of putting up hotels and parking garages and other such markers of modernity. And they did. The block has been completely redeveloped, with the exception of 211 Pearl Street whose facade is still standing, partly because it was originally home to Colgate (yes, that Colgate) and partly because a strange brick triangle was found in the walls. The facade now masks a parking garage, and with future development planned for this site, it will likely look a bit out of place—but that may be better than having lost it entirely, no?

I find it interesting that the voices of protest are most often the researchers. Of course, most historic sites don't have their original owners to speak for them, but in Narragansett, this isn't quite the case. The article doesn't permit the Narragansett tribe to speak on the issue beyond a mention that they side with the state, which is odd since according to the piece they've long regarded the site as sacred. The Narrangansett culture has been around for centuries and they are likely the first people to have lived in the Rhode Island region. it seems that if anyone should be vocal about the findings, and have a real say in the future of the site, it would be these people.

We are constantly building bigger buildings, re-building sites, repurposing our land. And we have to—space is at a premium! But do we really need another hotel? Or another housing development where the houses are virtually indistinguishable from one another? At what point do we draw the line between progress and progress for the sake of progress? And who should be the custodian of historical sites—the state, a research body?

The time will certainly come when we are no longer here. Will there be a record of our past, or only of our progress?

Thanks to Meg Kassabaum for chiming in on archaeological matters.
Special thanks to Barry Bainton who forwarded the link to this article: