Creating Social Order on the LIRR

The LIRR really does offer a different mass transit experience when compared to the NYC subway system. I've already mentioned the cushioned seats, and (somewhat smelly) bathrooms. And there really isn't a problem with overcrowding—unless it's a holiday weekend, and the commuters are vying for seats alongside city dwellers headed to eastern points. Plus, you can bring a happy-hour beverage with you for the ride (and you don't have to hide it in a brown paper bag, you can savor your drink in an actual cup). But by far, the biggest selling point for the LIRR is that you get to bypass the traffic that clogs most of the main roadways during rush hour. The clientele is rather specific though. The LIRR really isn't mass transit for the masses. For one thing, it can be expensive: a one-way ticket from Jamaica to Penn Station can cost about $11.00 if purchased on the train. The other difference is that the LIRR has its own social codes. Sure, LIRR riders flow into the subway systems at Penn Station and Atlantic Avenue and become members of the "masses," but there is an understanding that specific social "rules" apply when on the LIRR. 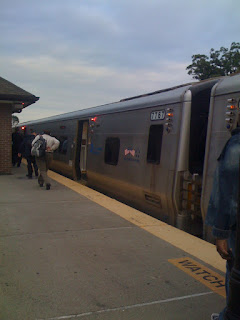 LIRR riders constitute a community. Riders form networks—the same people tend to commute together, boarding the same train in the morning, and returning together at night. At the very least, they can often recognize each other by face and will greet each other with a nod of acknowledgment if not a full hello. Like all regular train riders, they know where to stand on the platform so that the train doors open in front of them, forming little groups who notice when a regular member is missing or when an interloper tries to muscle in on the real estate. They watch out for each other. If one notices that another rider bound for the same destination has fallen asleep, the sleeper can be assured that he won't miss his stop—and since LIRR trains don't run every five minutes and stations are often towns apart, this small courtesy can save someone from a major headache. (If you've never experienced either the NYC subway or the LIRR, it might be useful to view the system maps. The NYC subway map is here, and you can view the LIRR system map here.)

As a network of riders, they have taken it upon themselves to launch and enforce a social movement that is rippling through the system—and has in fact been picked up by the LIRR as a system-wide campaign called Courtesy Matters. The campaign targets two areas that the LIRR ridership has identified as problematic: loud cell-phone talkers (noise pollutants) and inappropriate seat-usage (e.g., putting your feet or bags on the seat, or any other behavior that prevents a LIRR rider from using an available seat). 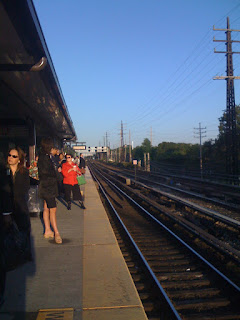 Image: LIRR riders waiting for the train. Note that people are arranged in loose groups.

Many LIRR riders have long commutes (as you can see from the system map above); it can take up to two hours for riders to reach their destinations, and many try to use this time productively. They may try to catch up on work or reading, or simply relax with a nap. In general, the atmosphere on the LIRR is calm and quiet. However, the development of new portable technologies has also introduced the decline of personal space in public areas. How many of you have been in line at the supermarket (or anywhere else you fancy) and been subject to the conversation of an oblivious cell phone user? Intimate details are sometimes shared—whether or not you want to be privy to them. On the LIRR, riders are really a captive audience. And with people trying to read, work, or relax, they're not really interested in being distracted by 30 minutes of "And then he said what?! Can you believe that??" 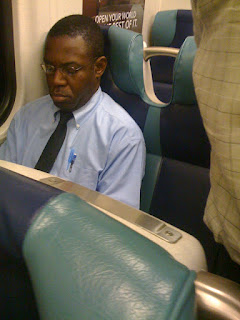 The other issue that falls into this category is noise pollution from portable music devices, such as iPods. Users of these devices sometimes turn the volume up loud enough for the lyrics to be perfectly clear to folks sitting rows away. In one instance, a young woman was sitting in the middle seat of a three-seater row listening to popular recording artist Katy Perry. She was unaware that the volume of her iPod was disturbing the people next to her, much less anyone else in the car. As the conductor passed, someone asked if he would intervene, and when he collected her ticket, he asked her to turn the sound down explaining that "these folks don't seem to want to party with you." She was extremely apologetic, and I've seen confrontations between riders that didn't go quite so smoothly, but the incident demonstrates how how the idea of "personal" is becoming more public. 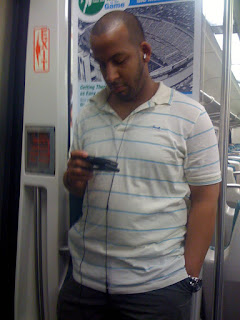 Image: IPod user on LIRR. (He kept the volume low.)

LIRR riders have decided to combat this encroachment on personal space. They will ask loud cell phone users to dial it down—and will stand their ground if a confrontation ensues. They will ask other riders to move bags so that seats are available. And recently, I have seen riders request that iPod users lower the volume of their devices, especially in the morning when many riders are trying to catch a few extra minutes of sleep. And the system-wide campaign validates these actions. There are electronic announcements asking riders to keep cell phone calls short and voices low—or to step into the vestibule for extended conversations. The electronic announcements also ask folks to keep their feet and bags off the seats. Conductors also make similar announcements, adding that riders should try and keep the volume low on portable media devices. Each month the LIRR publishes a pamphlet detailing performance for the past month, and they include a tongue-in-cheek reminder that the Courtesy Matters campaign is ongoing. And the process comes full circle as LIRR riders support these endeavors by enforcing these guidelines. 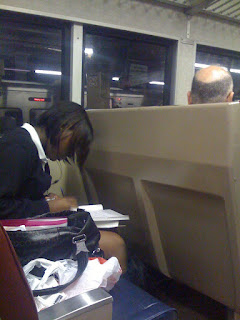 In a previous post, I talked about the network effect—i.e., the ways in which a collective can mobilize an idea. Here we have a mobilization to reclaim personal space in the public arena. And the idea is gaining momentum: Other transit systems are instituting similar courtesy campaigns. The success of these campaigns will depend on the networks that make up the social orders that the campaigns serve. For example, smokers have better quitting success rates when other members of their networks quit too. If campaigns like these are to be successful, they will need network support. Only then will the greater social collective (ie., society) be able to implement new social orders, such as the recent move by European states to set mandatory volume levels on iPods.

But let's go back to Emile Durkheim for a moment (remember him?). One of Durkheim's tenets is that individuals (and subsequently, their networks) operate to preserve society (the collective). Therefore mobilization on the network level—particularly that which spans multiple networks—is indicative of major shifts. If we can interpret this campaign as an attempt to reclaim personal space, then what can we understand about the importance of personal space with regard to social life?

Social lives have always been lived in both the public and private spheres. However, just as we occupy multiple roles as individuals (e.g, a person can be a wife, mother, sister, sister-in-law, teacher, writer, basket-maker, doctor, poet, and student all at once) and juggle the responsibilities associated with those roles simultaneously, so too do we juggle the responsibilities of our public and private lives. They are always with us. When we enter the public sphere, we use personal space as a medium to preserve our privacy. The growth of social media has resulted in the erosion of the walls of the private, and allowed personal agenda items, such as private conversations and individual music enjoyment, to travel into the public sphere. As these walls crumble and crack, we find that personal space is jostled and becomes  constricted. The point is that public space is meant to be shared. It seems that because we must travel through the public sphere, personal space provides a means for preserving the individual as she travels about. The individual needs to be preserved because she has multiple roles to fulfill, and these roles are important to the preservation of society. Noise pollution and commandeering multiple seats are attempts to claim more of the public space for a single individual. If we follow the argument put forth, we have a formula for restricting movement in certain circles—and if movement is restricted, then society is compromised because individuals cannot fulfill their roles within their networks.

We'll have to wait and see what happens with the LIRR campaign and others like it. There's no doubt that society and social order is adaptable—it needs to be, after all. With the increasing popularity of portable media devices, and the efficiency they offer (look, I'm not volunteering to give up my cell phone OR my iPod), it'll be interesting to see what type of compromise is reached, if any, between the collective and the use of these conveniences and how it unfolds within the networks. It appears that the LIRR is a "playground" in its own way. Just as children learn important social understandings on the playground, we are seeing a process of socialization occurring in this environment. The NYT recently discussed ways that children help each other learn social behaviors. Perhaps there are parallels to this process on the LIRR as well regarding the introduction of personal media devices. 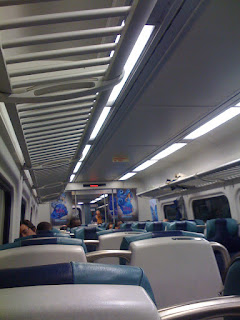 Do you have a personal space story to share? What are your thoughts regarding the Courtesy Matters campaigns? Let's chat below.