Dancing His Cares Away—and Spreading Happiness Too: Contagion and Networks

One of the things I love about New York City is that it's full of interesting characters. On any given day, you never know who you'll meet in a subway car or on the sidewalk. And it's a testament to New Yorkers that they don't bat an eye (usually) when confronted by a  character—occasionally you might see a smile or someone shaking her head, but overall the response the minimal.
I have the good fortune to have my very own character who can be counted on to make an appearance 3 - 4 times a week. He dances. That's right, on the 2/3 platform at Penn Station, this guy boogies down to jazz he listens to on giant headphones. I know it's jazz because as I pass I can sometimes hear him scatting under his breath. He moves gracefully too—elaborate twists, turns, dips, all while avoiding people moving around him on the platform. 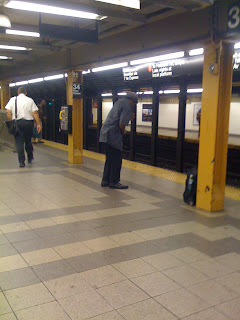 Image: Gettin' down to jazz on the 2/3 platform at Penn Station.
I can never pass this guy without smiling. He's so lost in the music. In his head, he could be performing on stage with the rest of us serving as no more than props. He doesn't usually have much of an obvious audience. Most people at Penn don't stop and stare; they're too busy hurrying to catch a departing train—and perhaps he's become something of a fixture. But the ones who manage to catch his performance while waiting for the subway watch with interest. We can't hear his music, but it's obvious he's enjoying himself, and that enjoyment is contagious.

The October issue of Wired featured an article on the contagion effects of networks. You can check it out in full here if you're interested. In a study started in 1948, scientists tracked the effect that social networks (which have actually been around longer than the Internet, believe it or not—though I understand it's hard to imagine life before the Internet at this point) has on group mentalities. The studies revealed that occurrence of obesity within a network increased overall as more members became obese. There's a really neat chart here detailing the influence of network connections and obesity. Networks govern patterns of behavior—as well as acceptable levels of exercise, dietary decisions, and appearance. In essence, we tend to share behaviors and ideas with our networks. For example, the study revealed that smokers are more successful at quitting smoking when others in their networks quit at the same time—sounds like a powerful new argument for peer pressure.

The facet of the study I want to discuss here is the spread of happiness through networks. Tracking happiness both in a real world network and on Facebook, scientists found parallels in rates of happiness in networks (check out the chart here):
Using Facebook, the scientists developed a way of measuring happiness through smiles, and found that:
Networks provide evidence of a social collective at work. The dancing guy at Penn Station exerts an influence on the collective whether or not he wants to acknowledge that the collective is present in his space. In choosing a public stage, the collective has to witness his actions and take some part of his behavior away with them. The folks who witness his smooth moves, who become a part of his performance as he sidesteps around them, introduce some of their reactions to their own networks. Whether that reaction is annoyance that this guy got in the way as they tried to get to the stairs, or amusement at his enjoyment (because let's face it, different folks can react differently—there is no universal reaction standard; there are just too many variables in a person's day), some part of this reaction/feeling is transferred throughout the network. It could be something as simple as a pleasantry with a train conductor, but it's a ripple that begins with the dancing man at Penn Station.
It's a pay-it-forward principle; it's a gifting concept. Whatever the ripple, we need it—just as we need our networks. Networks define principles for the collective, and the collective in turn helps develop guidelines for social life. The social norms we accept and support originated in networks. They achieve the status of social norm based on how widely accepted and practiced they become through different networks.
If happiness can be spread this way, dance on, man.
Dance on.
© Krystal D'Costa